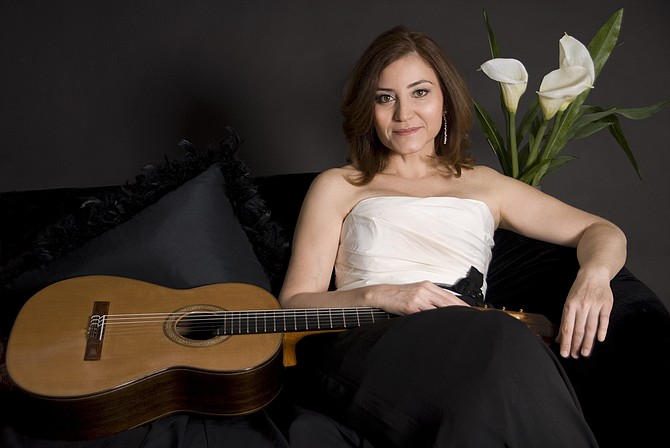 Join the Fairfax Symphony Orchestra (FSO) for a special evening titled “Nostalgic Nights” with special guest Berta Rojas, one of today’s foremost classical guitarists. “This program has a little bit of everything in terms of musical styles and expression (not to mention nationalities),” said Christopher Zimmerman, FSO Conductor and Music Director.

Audiences can expect “beautiful, varied music in a more intimate setting, and a marvelous, appealing soloist on an instrument not usually associated with a symphony orchestra,” added Zimmerman. That instrument is the acoustic guitar played by Berta Rojas.

Rojas will be performing Joaquin Rodrigo’s popular masterpiece “Concierto de Aranjuez.” It was written for acoustic guitar and orchestra by Rodrigo who has been blind for many years.

“Diversity and connection!” is the way Zimmerman described the concert. It has “lots of completely different European styles, yet a thread.” Beyond Rodrigo’s “Concierto de Aranjuez,” the concert includes Mozart’s “Symphony No. 35” (Haffner), Ravel’s “Pavane for a Dead Princess,” Honegger’s “Summer Pastoral,” and “Symphony No. 1” (Classical) by Prokofiev.

The varied musical selections of the FSO concert will explore diverse temperaments from the dreamy to the intense.

There is “the emotional topic that inspired the searing tune in the central movement of Rodrigo’s Guitar concerto, which was written on the death of his own young daughter,” noted Zimmerman.

The Mozart selection “is a classical gem like so many of his works and the Prokofiev symphony was inspired by, and at times deliberately parodies, his music. Hence its name: ‘Classical’ Symphony.” added Zimmerman. The works by Honegger and Ravel “are short pieces, conjuring mood and atmosphere.”

Guitarist Rojas (from Paraguay) has been nominated three times for a Latin GRAMMY. She has been named a Fellow of the Americas by The Kennedy Center for her artistic excellence.

“Music is nothing if not the bridge that brings people together and opens a path to honest communication between them,” said Rojas. “Playing the guitar, for me, is a way of communication.

“There is always a message to take to the stage, to bring forward to others, regardless of what it is each of us has chosen to be and do in this world,” added Rojas.

This FSO concert will be performed at the Harris Theatre, George Mason University. “The Harris Theatre is a good venue for a more intimate program and particularly for the guitar as a solo instrument,” noted Zimmerman.

Fairfax Symphony Orchestra presents “Nostalgic Nights” with special guest Berta Rojas at Harris Theatre, George Mason University (Fairfax Campus), 4475 Aquia Creek Ln, Fairfax. Concert on Sat, Nov. 16 at 8 p.m. Tickets: $30, $45, and $55. Student tickets $15. For more information and to purchase tickets visit www.FairfaxSymphony.org or call 703-993-2787. Note: Hear the stories behind the music with music director Christopher Zimmerman and special guests before the concert at 7 p.m. The Harris Theatre is a short walk away from the Center for the Arts Concert Hall.