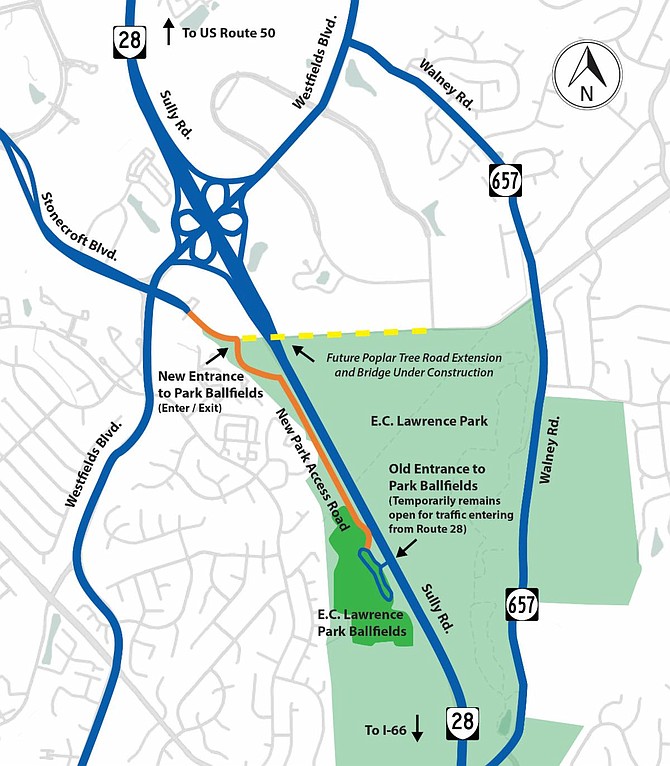 Access to the E.C. Lawrence Park athletic fields is being moved from Route 28 to a new access road from Stonecroft Boulevard.

A new access road to the E.C. Lawrence Park athletic fields opened as part of the Virginia Department of Transportation’s (VDOT) Transform 66 Project. The new entrance will have an address of 5000 Stonecroft Boulevard and is on the north side of the park, accessible from Westfields Boulevard. The existing park entrance from Route 28 will remain open temporarily for inbound traffic only before it closes permanently in December. The project has also added 115 new parking spaces near the ballfields.

“Moving the entrance to the E.C. Lawrence Park ballfields is necessary as we work to remove the remaining traffic signals on Route 28 north of I-66,” said Susan Shaw, P.E., VDOT Director of Megaprojects. “As construction advances in the Route 28 corridor, we ask motorists to be alert to changing traffic patterns.”

Starting on or about Wednesday, Nov. 13, 2019, drivers can access the park as follows:

A shared-use path will be constructed adjacent to the new access road and open in 2020. Park access will be improved further when Stonecroft Boulevard is connected with Poplar Tree Road via a new bridge being built over Route 28 that is scheduled to open in November 2020.

Additional information on the work along the Route 28 corridor for the Transform 66 Project can be found on the project website transform66.org.

On Nov. 18, VDOT and its private partner for the Transform 66 Project will host an open house and project construction update for the Centreville area and Route 28 corridor at Stone Middle School, 5500 Sully Park Drive, Centreville, from 6:30 to 8:30 p.m.