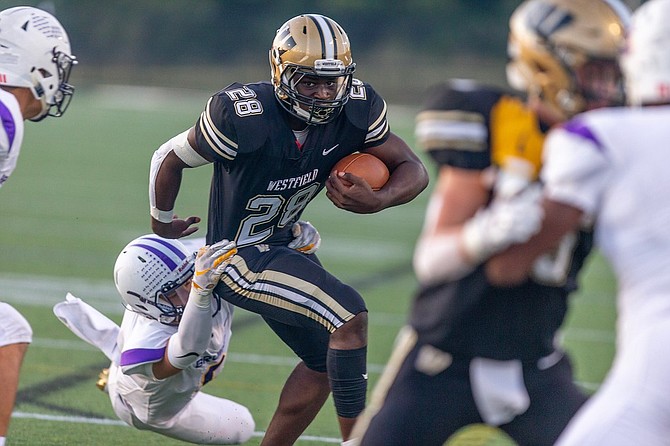 Mikal Legall rushes in for one of his two touchdowns. Photo by Will Palenscar/The Connection

Joe Murray of Lake Braddock rushes in for a first quarter touchdown with 3:24.

Avery Howard #17 fights his way in for a Westfield touchdown.

Noah Kim #10 completed 15 passes, two of which were touchdowns.

The Westfield Bulldogs and Lake Braddock Bruins met up for Westfield’s homecoming game on Sept. 20. Both teams entered undefeated.

Westfield would get on the scoreboard first when Noah Kim connected with Avery Howard on a short 3 yard touchdown with 9:21 to play in the opening quarter. After a James Williams PAT, the Bulldogs led 7-0. later in the quarter. Joe Murray would run in from 5 yards out for the first of two touchdowns. Austin Rawlins was successful on the PAT and the score was even again at 7.

After a scoreless second quarter, Max James would give the Bruins their first lead of the game, 14-7, when he ran in from a few yards out with 9:22 to play in the third quarter. Rawlins was then successful on the PAT. Westfield's Noah Kim would then find receiver Alex Richards in the end zone for a 37 yard TD with 4:06 to play in the 3rd quarter. James Williams would add the PAT, and things were knotted up once again, 14-14. Lake Braddock would score again when Matt Hibner was the benefactor of a Billy Edwards 10 yard TD pass. Rawlins was again successful on the PAT. Lake Braddock now led 21-14, with 1:14 to play in the third. Avery Howard then took the ensuing kickoff from the 1 yard line and sprinted to the endzone, with just 14 seconds elapsing from the clock. Williams was again successful on the PAT.

The fourth quarter would see six touchdowns scored in the next 12 minutes and the teams deadlocked at 21. The Bulldogs would get the ball back after punt went off the side of the Lake Braddock punters foot and giving Westfield great field position.With 10:09 to play in the game Westfield QB Noah Kim ran in from 1 yard out to give the Bulldogs a 28-21 advantage. Then later in the fourth Westfield appeared to start pulling away, with the running of Mikal Legal. Legal would end the game with 92 yards on 21 carries, and 2 TD's, the first of which came 7:21 to play in the game and gave the Bulldogs a 34-21 advantage. The ensuing PAT was unsuccessful. Then after stopping the Bruins on a 4th down attempt the Bulldogs were once again able to add points to the scoreboard when Mikal Legall scored his second TD with 4:08 remaining. The Bulldogs elected to attempt a two point conversion and were unsuccessful. The score was now 40-21. However, the Bruins still had fight in them, A nearly three minute drive resulted in the Bruins getting a touchdown in the most crucial of times. Max James scored his second touchdown of the game with 1:14 to play. After a successful PAT the score was now 40-28. After a short delay after the kickoff it was determined that Lake Braddock had recovered the ball. A few plays later Billy Edwards threw his second TD pass of the game to Hibner, this one covered about 5 yards. The ensuing PAT was blocked by Westfield and the score remained at 40-34. Westfield would fall on the onside kick attempt with 40 seconds remaining it would just take a snap to make the game official.