The (Virtual) Show Must Go On at Langley High School!
Votes

The (Virtual) Show Must Go On at Langley High School!

Even though we’re separated by distance, we’re closer than ever. 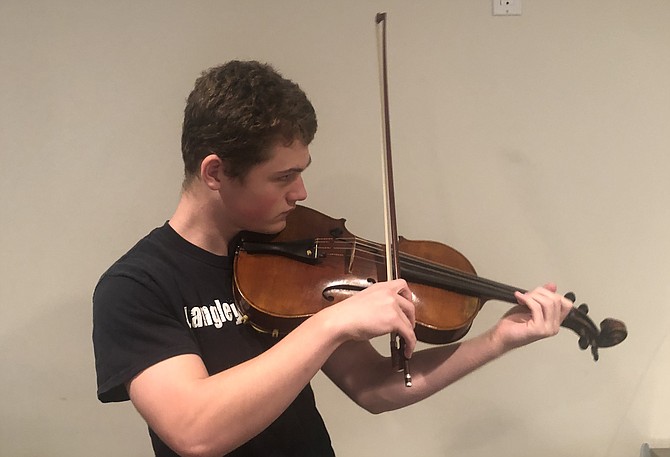 Senior Otto Janke plays viola in a video recording that is included in the Langley HS Orchestra’s virtual concert. Photo by Ritvik Chennupati

By Miles Yang and Francisco Yang 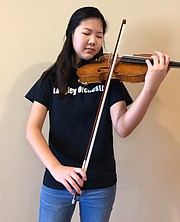 Senior violinist Alyssa Kim was one of the soloists playing the “Theme from Schindler’s List” in the Langley HS Orchestra’s virtual concert. 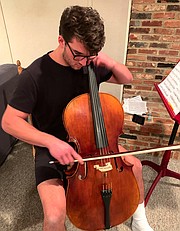 Staring at a computer for online class is far from the true experience of a classroom setting. COVID-19’s closure of schools in March has prevented Langley students from taking courses the way they were designed to be taken, but apps like Schoology and Blackboard Collaborate allow students to learn material virtually. However, the Langley High School Orchestra has a completely different problem.

Firstly, video calls have the slightest delay in audio, which makes it impossible for orchestra students to synchronously play their instruments. Even more, the built-in microphones in school-issued Chromebooks don’t always pick up all audio, often leaving out higher pitches and softer sounds that are filtered out. Danyal Ashraf, a junior in the Symphonic Orchestra, remarks how “being online has made it much more difficult to fully experience orchestra class because it makes practicing harder because you can’t hear the other sections.”

Well, how will we hold concerts?

LANGLEY ORCHESTRA students have found a solution: virtual performances. Each student practices their part on their own and records a video of themselves playing. Then, the Langley Orchestra Tech Team, led by senior cellist Riker Wilson, uses video editing software and a bit of movie magic to stitch the hundreds of clips together, ultimately creating a video of the entire performance.

Not only does the virtual performance solve the problem of holding concerts, but it also gives room for more creativity in the visual aspect of performances. While the melody plays in the background, skits and small videos play on the big screen to add a bit more fun to the viewing experience.

Executing a virtual performance, however, requires a great deal of work from the tech team; even with 14 team members from all four grades, lining up audio, stitching videos together, and fine-tuning the final product demanded more than 80 hours of work. Every student must do their part, and coordination throughout the entire orchestra is key. The leadership of Tri-M (Langley’s orchestra honor society) and the Langley Orchestra Tech Team have taken a central role in organizing this Herculean project, and with their fearless leader, Dr. Scott McCormick, at the helm, students are able to create a spectacle for all to enjoy.

The Langley Orchestra carries a tradition of concert themes, and for the first virtual concert of the year, Dr. McCormick chose “film composers.” During the first quarter, students studied a number of famous film composers throughout film history including Benny Goodman, Hans Zimmer, and John Williams. For Langley Orchestra’s “Film Composers Concert,” each orchestra practiced and performed one famous piece from award-winning film soundtracks.

Beginning the program, the Concert Orchestra, along with soloists Alyssa Kim on the violin, Fay Shuai on the cello, and Alyssa Katahara on the harp, plays the “Theme to Schindler’s List” by John Williams (arr. Longfield). The film’s entire Oscar-winning soundtrack features the traditional Jewish music of central Europe and expresses the sorrow and despair of Jews during the Holocaust.

NEXT, the Symphonic Orchestra performs “The Incredibles” by Michael Giacchino (arr. Moss), with Craig Hunter on drums. “‘The Incredibles’ is one of my favorite movies from my childhood,” says Gabriel Krieger, a senior violinist in the Philharmonic Orchestra. “I wished I could’ve seen it live, but the virtual concert was even better.” Although the soundtrack uses a style of jazz dominated by brass instruments, violins with the melody greatly emphasized their dynamics in order to mimic the resounding sound of trumpets.

To end the program, the Philharmonic Orchestra performs “Cinema Paradiso” by Ennio Morricone (arr. Krogstad). Morricone is famous for writing compositions in a wide range of genres, but he is most well-known for his spaghetti westerns. Morricone’s passing last July inspired Dr. McCormick’s “film composer” theme, and the Philharmonic’s performance is a small tribute to one of the greatest film composers of all time.

With hundreds of views since its premiere on Saturday, Nov. 21, the first virtual concert of the year was an overwhelming success. Viewers at the premiere were even able to make live comments, creating an environment where students could connect with one another while watching safely from home. While students may be apart, making music brings the students of the Langley High School Orchestra together.

Our first concert can be viewed at https://www.langleyorchestra.org/.