Orchestra returns to the big stage 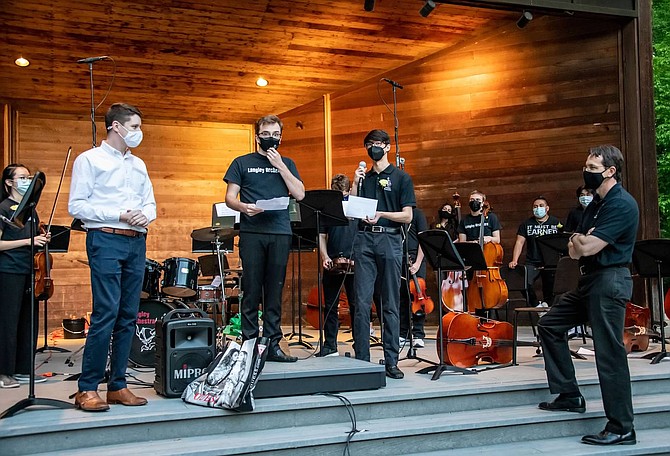 For many Langley High School Orchestra students, adjusting to a year of online rehearsals and virtual concerts has been difficult. In regular years, concerts have been the highlight of the school year, with the culmination of months of practice ending in putting on a performance for the whole community to enjoy, not only as a musical experience but as a social gathering: a chance to connect with friends and family.

With the Wolf Trap National Park for the Performing Arts generously opening its venues to local high schools and with social gathering restrictions lifting, Langley Orchestra was able to perform in front of a live audience for the first time since March of 2020, in a venue where they had never played before.

As one of the first local high schools to resume in-person musical performances, Langley Orchestra aimed to present a meaningful and memorable concert for their audience. The theme of the evening was “Sounds of Hope,” a resounding reminder that even through adversity, music will prevail. With an audience of student family members and former orchestra students, the performance was truly a testament to the unity that music can create, even after a year of separation.

LANGLEY ORCHESTRA had been practicing almost entirely virtually before the performance, meaning that for many students, this was their first time playing the pieces side by side with other Langley Orchestra members. But after a few short rehearsals, the orchestras were able to overcome this barrier and put on memorable performances.

For Langley Orchestra’s director, Dr. Scott McCormick, the performance represented something bigger than a typical concert. “After spending an entire year talking to my students over a computer screen, to actually see them live, to see them interacting with each other and the energy that results, and the improvement from taking just a brief rehearsal, meant the world.”

Keeping with the Langley Orchestra tradition of playing popular music pieces at end-of-school year concerts, the performance exuded a casual and welcoming atmosphere, celebrating the beginning of a return to normalcy.

Opening the performance was Langley’s Concert Orchestra, performing a rendition of “Don’t Stop Believin’” by Journey (arr. Moore). The classic 80s rock hit reflects a message of finding meaning and hope within darkness.

The Symphonic Orchestra then took the stage, performing an orchestral version of the rock ballad “Dream On” by Aerosmith (arr. Ryan). The iconic guitar riffs of the original were replaced by violin playing, giving the piece a melancholy yet intense feel.

Next, the Philharmonic Orchestra performed “Difficult Year” by British rock band Keane (arr. Hunter). While the song was released back in 2019, the lyrics seemed most fitting for the past tumultuous year, with the lyrics of the original song closing off with the words “it’s been a difficult year, I just wish we’d been together to face it.” The orchestral version of the song carried similar tones, with a comforting and uplifting feel.

Afterwards, Langley’s Senior Orchestra performed “I Will Survive” by Gloria Gaynor (arr. Reed). Senior musicians celebrated their determination and perseverance after a year of virtual learning and missing out on typical senior year experiences. It was a bittersweet performance, as it marked both the first and last live concert that seniors would play in for the year. For many seniors however, the concert ended the school year on a high note. “It was great to have the opportunity to perform in person one last time” noted Chris Ross, a senior violist in the Philharmonic Orchestra.

FOLLOWING the Senior Orchestra’s performance, as a surprise for Dr. McCormick, the senior class performed an original piece as part of their senior gift. Composed and arranged by senior cellists Keon Parastaran and Misha Somogyi, the senior class performed “A Tribute to Doc” with the surprise appearance of Mr. Adam Willett, Langley Orchestra’s former Assistant Director, who conducted the piece. For seniors, the piece was both reminiscent and comforting, bringing back fond memories of their time in Langley Orchestra.

The whole slate of performances projected a message of hope, perseverance, and unity.

The performance was a welcome breath of fresh air for student musicians, after being cooped up at home for so long. “It was so much fun to have a concert and see my orchestra friends after the past year of virtual learning,” said Bianca Harris, a junior violinist in the Symphonic Orchestra. “The concert was amazing and it was great to get to play for an actual audience.”

For Langley Orchestra students and audience members alike, the performance was an unforgettable experience, marking the beginning of hopefully many more live performances as normalcy begins to return. As for the graduating seniors of Langley Orchestra, the concert was one last farewell and a sendoff to their bright futures ahead. Ultimately, Langley Orchestra left a resounding message: music truly is the sound of hope.