ArPets: Why Cats Could Be Good for Your Bones
Votes

ArPets: Why Cats Could Be Good for Your Bones 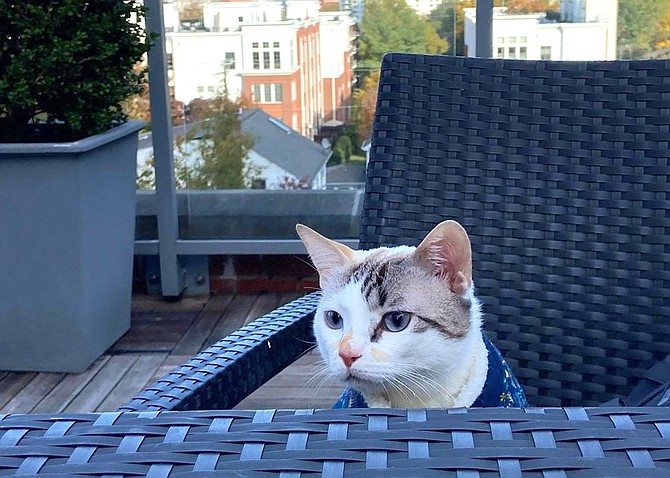 Jennifer Zhuge's parents wouldn't allow pets when she was growing up. And she really, really wanted one. So one of the first things she did when she got her own place was to go on the hunt for a furry companion. She says her cat, Aiko, has been a perfect fit for her lifestyle.

"Cats are fantastic, [they] get a bad rep for not being affectionate, but I've found that cats can be just as affectionate as dogs," she says.

Aiko walks on a leash and enjoys interacting with neighbors and strangers alike, according to Zhuge. She used to have weekly playdates with another feline named Tai. The two cat-moms would trade off hosting and the four-leggeds would spend an afternoon wrestling. Before the pandemic, the moms enjoyed a little socializing on playdate days as well. Unfortunately, Tai and his mom recently moved away and Aiko is really missing her friend.

To be honest, if I didn't know Aiko was a cat, I would have assumed she was a dog. Affectionate, social, cares about others, facilitates human friendships, those are all stereotypical dog attributes.

I've been thinking quite a bit about stereotypes and cats and dogs recently. One of my inner circle, a cat devotee, questioned why it seems ok to malign cats, even expressing hatred toward them. Yet if someone says they hate dogs, he/she is thought to be a sociopath. I haven't been able to get it out of my head. It rings both true and unfair and might even be a metaphor for other things going on in the world today.

If we were talking about bird households at just under 3 percent in the U.S., maybe it could be explained, not justified, as being a minority issue. But according to the AVMA, 38 percent of households have a dog vs. 24 percent with a cat. The difference just doesn't seem significant enough.

My initial dive into the differences between cat and dog "people" revealed that despite the headlines and even the research summaries, the little exploration that has been done on this topic has yielded inconsistent results.

It appears that somewhere along the way, society has created these stereotypes and many have adopted them. And, actually, there may not be much in the way of significant differences between dog and cat lovers. When I consider my own cat-vs dog- friends, that actually tracks.

Dispensing with the pet-related people stereotypes left me with some time on my hands to look for the goodness in cats. I like cats, but I would definitely describe myself as a dog person. Googling "what's great about cats," resulted in a list of lists, most of which focused on things that I'd categorize as practical. Cats are, "not emotional," "low maintenance," "quiet," independent" and "inexpensive (compared to other pets)..."

The same search for dogs got me a completely different flavor of descriptors, dogs "have your back," "are great companions," "make you feel less alone…" And, according to my search results, not only are dogs loyal companions, but they also offer awesome health benefits; Dogs are good for your heart; they decrease stress levels, they help seniors with cognitive function and they encourage their owners to get off their butts.

So the same Google search for each revealed that dogs are awesome and cats, well cats are fine, if that's what you are looking for.

Having just watched “The Social Dilemma” on Netflix, it occured to me that my search results might be colored by Google serving up reinforcement of what "they" have determined I think, instead of feeding my desire to expand my worldview.

So I decided to be more specific and googled "health benefits of cats." Sure enough, there is a veritable treasure trove of health benefits enjoyed by cat owners. Like dogs, cats are good for your heart and can lower stress and anxiety. That does seem logical. But, I had no idea that medical experts think that cats purring may have a positive effect on joint mobility and bone healing, due to its frequency. So the joyful noise made cats may have actual physical healing powers. How completely awesome is that?

More searching and I learned that cats love their human families and are very affectionate. Yes, just like dogs. But, even cooler, cats can also be taught to use a toilet and even to flush! I'd like to see my beagle try that.

Personally, I climbed out of this week's rabbit hole with a much greater appreciation of our feline friends. But, more importantly, it was a good reminder not to believe the hype.

If you want to weigh in on the cat people vs. dog people debate, email Joan at joan@joanbradyphotography.com.

If you are interested in adding a cat, dog or small animal pet to your household, here's a few local rescue organizations who might be able to help you find your perfect match: