Focus on Social Justice at First Baptist Church of Vienna 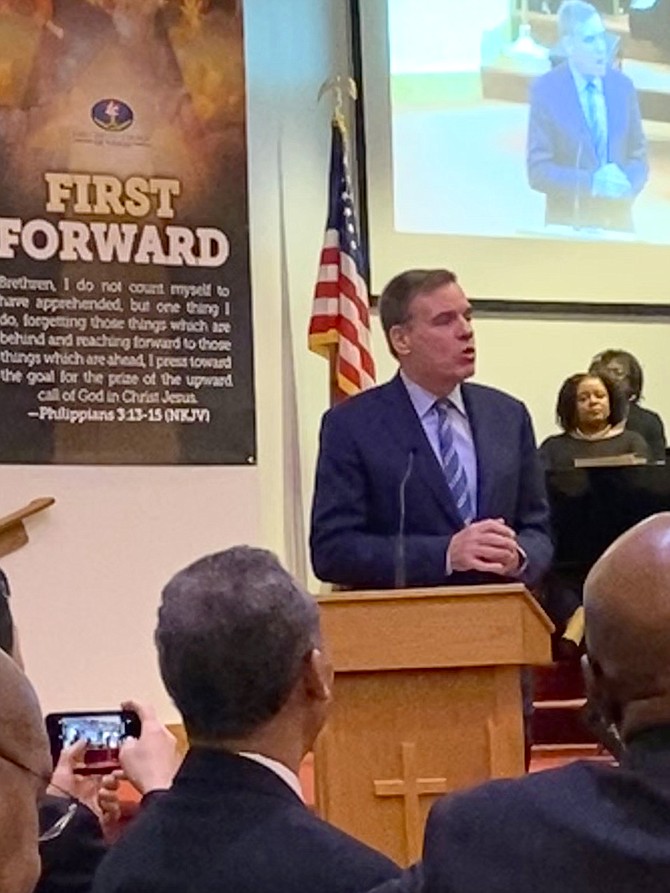 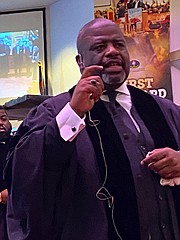 The First Baptist Church of Vienna hosted its 4th annual Justice and Legislative Sunday, Feb. 2, 2020. The congregation opened its doors and invited legislators and members of grassroots organizations to join them for worship services. Afterward, everyone convened in the church's fellowship hall for the "Justice & Legislative Fair," one of the church's signature social justice events. The forum provided the opportunity for the congregation and guests to engage in one-on-one dialogues.

Before the 10 a.m. service started, Frank Bowers of Chantilly and Jim Biggs of Manassas helped set up the fellowship hall and considered what they wanted to ask the legislators. Bower said he planned to ask, "What are you going to do differently in 2020, than the other year of service, 2016, when you dropped the ball, and America got a king to rule over them."

Biggs considered his question. "My beef is I want to know what they are going to do to curb the incarceration rate for minorities. The district attorneys are more interested in closing cases rather than giving individuals fair trails,” he said.

Upstairs In the sanctuary, two deacons waited for the legislators to arrive. They, too, considered what they would ask. Deacon Thomas E Twyman, Sr. said, "Health care is the number one issue. And affordable housing."

"I'd like the political atmosphere to turn back as it was when we had Obama, when people tried to work together to solve problems. Now it seems the new president brings out the worst in some. We need to keep our democracy. That means everybody gives in some for the greater good," said Anthony Weaver of Oak Hill.

Shortly before the service began, the legislative guests arrived. They represented all levels of government. Among them, U.S. Senator Mike Warner (D), who provided remarks during the service.

SEN. WARNER recounted the words Dr. Martin Luther King, Jr. frequently said to remind listeners of the long road ahead of them when committed to progressive politics. "The arc of the moral universe is long, but it bends toward justice," Sen. Warner said. He told the congregation to take these words to heart when they thought about some things in the news. The senator noted that it had been fifty-two years since Rev. Dr. Martin Luther King, Jr. was murdered." So many things that Dr. King spoke about, we still need. There is still way too much of a racial wealth gap. There is still too much of a criminal justice system where my daughter is treated differently than your sons and daughters when they interact with the police," he said.

Sen. Warner added that Dr. King said he hoped there would be a day in America when his children and grandchildren would be judged by the content of their character and not the color of their skin. "And, if there is ever a time when in our nation, we need to be judging our leaders by the content of their character, it is now. The church teaches us to respect each other, to be truthful, to treat people, even if we disagree, with respect. I hope and pray that sometimes the individual who currently lives at 1600 Pennsylvania Avenue might take those words to heart as well. These are challenging times in our nation. I want to thank our Lieutenant Governor and legislators. Even though we may be struggling in Washington, we are moving many things forward in Richmond," said Sen. Warner.

Lieutenant Governor of Virginia, Justin Fairfax (D), Delegate Mark Keam (D-35), Fairfax County Commonwealth's Attorney Stephen Descano (D), Supervisor Walter Alcorn (D-Hunter Mill), Fairfax County School Board At-Large member Rachna Sizemore Heizer and many more attended Justice and Legislative Sunday with Sen. Warner. They listened to the senator and Pastor Dr. Vernon C. Walton, who said in his sermon that in a country that had so much, it was possible for so many to have so little.

"It's hard to believe in a nation where so much food is wasted daily, it would be possible, particularly children, to go to bed hungry at night and have no food...(through the) weekend because school is closed... It's hard to believe that we live amid such great wealth and in a county with such great housing stock, that there would be individuals who literally cannot afford to live among us, even after working 40 plus hours a week... It's hard to believe that we live in a nation where elementary and high school education is free and available to all, but the quality of that education and the quality of the physical building will largely be determined by the zip code of those facilities," Pastor Walton said.

He spoke about school-aged children and those who gather in places of worship but must consider the serious risk and potential of some disturbed individuals who do not respect the laws nor the lives of others. "They cause significant damage to families and even significant damage to entire communities." Before the Justice and Legislative Service began, security guards stood inside the entrance of his church.

PASTOR WALTON added that many individuals were only moved to action when it impacted their lives. However, doing so, they miss the meaning of justice; justice is for all, not for the individual. He said that some individuals were so blessed; so "comfortable" they lost their sensitivity to the persons and individuals who found themselves in the margins.

"If we are not careful enough, …we can forget we are so blessed. We lose our sensitivity to the individuals that need us the most…. Today it is them. But there is the possibility it could be our day and our time tomorrow. Tomorrow, I would want someone to reach down and help pick me up… It's the poor, the marginalized, those that are struggling without health care, those that have no voice to speak for themselves.

After service, all gathered in the fellowship hall where members of the congregation and legislators mingled, asked questions and shared thoughts. As the event wound down, each legislator and school board member stepped to the microphone and gave a snapshot of proposed laws and actions in their purview.

Virginia Senator Jennifer Boysko (D-33): I've worked tirelessly for the past five years on expanding who can have a driver's license in Virginia as well as in-state tuition for our dreamers. I was a sponsor of the paid family medical leave bill that will allow people to deal with their crisis without losing their jobs. Tomorrow I will be presenting the Collective Bargaining for public employees, which will give all of them a seat at the table... I'm going to be working to make sure our judges look like the people in Virginia.

Stephen Descano, Fairfax County Commonwealth's Attorney: The question always comes back; how can we build a more just world...My mandate, as the leader of our criminal justice system is to do justice… That's why minute one of my administration I directed my prosecutors to no longer prosecute simple possession of marijuana, because we know that is way to disproportionately get young African American men and women through the front door of the criminal justice system. And that's not justice.

Supervisor John Foust (D-Dranesville): There will be an additional 5,000 units to serve people earning 30 to 60 percent of the area median income, AMI. It’s a 15-year plan. We are hoping to do more, but that is the base minimum promise to accomplish. To do that, we are adding $25 million more to the budget this year for affordable housing... I've read dozens of Economic Development Plans from across the country, and ours is the only one that I've ever read that has as one of its major goals to include Gaining Economic and Social Equity. In terms of social justice, I'm out there walking the picket lines and attending the rallies and speaking at the rallies for our bus transit workers. They deserve a better deal than they've been getting.

Fairfax County School Board Member Ricardy Anderson (Mason District): I want to be a voice for all of our students. It is our responsibility to move them all forward. That is our duty, and that is my call...while we work on the major issues that are happening right now, which is the CIP (Capital Improvement Plan) in the budget.

Fairfax County School Board Member At-Large Karen Keys-Gamara: We (will) pass the Fairfax County School Budget this week, at least the initial one. There are a number of priorities in there that would impact some communities... We would love to have your support come out and speak at our Thursday meeting to help support the initiatives that are addressing our dropout rate, the achievement gap, special education, and other initiatives.

Fairfax County School Board Member At-Large Rachna Sizemore Heizer: We worked on teacher pay. We are also talking about IA, Instructional Assistant pay... We want to make sure that we're paying them for the work that they do. I am positive that it is a social justice issue. My work has been as a disability social justice advocate. One of my primary focuses is to make sure we look at our special education students.

Del. Marcus Simon (D-53): We are looking at words in our codes; code still matters a lot. We, just this year in 2020 on Friday, took the language out of a code that allowed buses to be segregated....Something I've been working on personally, what can we do about these racial covenants that still exist in our land records.

Del. Ibraheem Samirah (D-86): I had a couple of bills I've been working on, (and others) we will be working on throughout this year... One is to allow accessory dwelling units in your home. What that means is, if you have a cottage, a basement or an attic, you should be able to utilize that to house a family or an individual for anywhere between $400 to $800 a month ...Another way is to allow you to use your home for two families as it is; what we call up-zoning for two family units... These are easy solutions for the affordable housing crisis. They cost $0 on the state; gives you more money for your pocket; allows your grandchildren, your children and anyone you want to live around you (to do so).

Vienna Town Council Member Pasha Majdi: I'm on the council in Vienna, which I don't talk a lot about here on Sundays. It's relevant this year because... I'm running for mayor. The election is May 5. It's a local, independent election. No Republicans, no Democrats. It's just your neighbors running for office.

Del. Mark Keam (D-35): In a different time in Virginia, meaning before last November, the words “justice and legislative” didn't go together very often... Many times, your legislative agenda at the state level and sometimes at the county level, did not necessarily reflect the justice aspirations of that term…Thanks to the many of you who have worked so hard to bring us a few friends to put Delegates Simon and Samirah, Senator Jennifer Boysko and myself in the majority party in the Commonwealth of Virginia. What that means, is whether you're talking about Racial Justice, Gender Justice, Workplace Justice, Workers Rights, Environmental Justice, Social Justice, Medical Healthcare, and even Justice at the federal level, Impeachment Justice, we can now finally do the legislation because that's the way your views are expressed in the democratic process.