“This is no time for small ideas.” 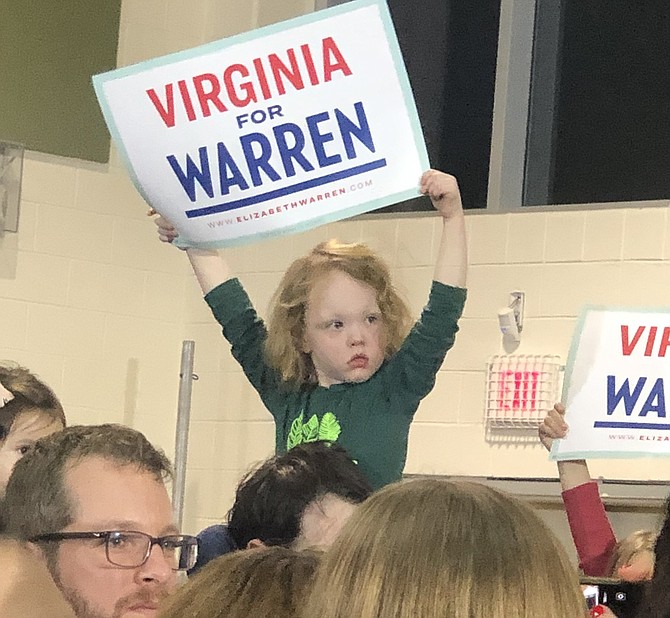 The crowd at Wakefield High School on Feb. 13. Photo by Holly Hazard

Elizabeth Warren on stage at an Arlington high school on Thursday evening.

Sen. Elizabeth Warren pumped up a large crowd in the gymnasium of Wakefield High School in Arlington on Feb. 13 with an energetic delivery of her stump speech excoriating the role of big money in government and urging “hope over fear.”

Warren claimed, “We have an America for rich people who don’t want to pay taxes… A government that works [only] for rich people and multinational corporations is the result of money … corruption, pure and simple.”

Warren returned often to the theme of money in politics in her 45-minutes speech. “We can make government work, not just for the rich and powerful but for everyone,” she said, adding that the rich are free to own more things — shoes, cars, houses — but “rich people shouldn’t own a greater share of our democracy.”

Warren pointed out the stagnation in middle class incomes over decades. “Why is that people who work every bit as hard as my parents find the path [today] so much rockier?”

The answer, she said, is that the economy and public policy are manipulated in favor of the rich and powerful.

Warren cited her plans to restore a more just and equitable democracy, including:

a rise in the minimum wage

an end to gerrymandering and voter suppression

more legal immigration and a path to citizenship for undocumented residents

and of course her signature “two cents” wealth tax proposal.

Slowing her delivery for dramatic effect, Warren also told the audience, “I’m going to say something controversial in Congress … [pause] I believe in science.”

To rousing cheers, she went on to make a commitment to $1 trillion in “environmental justice,” including the Green New Deal.

Warren finished by proclaiming, “This is no time for small ideas.” What is needed are “big structural changes.” Then she added a personal note. “I’m running this campaign from the heart,” she said, “because I believe in you.”