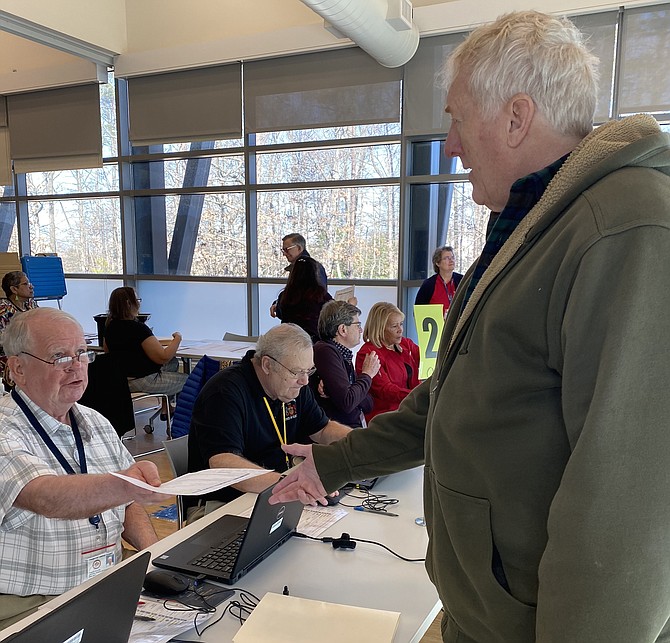 Anna Neuman of Reston said she wanted a strong candidate who could beat President Trump. "I'm here to vote against Mr. Trump because he is destroying our democracy, the climate, animals and people in need," Neuman said. Mary Jane Cochrane of Vienna agreed. Cochrane wanted "a strong candidate to oppose Donald Trump," she said.

At 10:30 that morning, Joe Gofus, Co-supervisor for the North County Absentee Satellite Voting, Fairfax County Office of Elections, checked the number of registered voters who cast their ballots by in-person absentee voting. "Twenty, during the first hour and a half, from 9-10:30 a.m.," he said.

Beckie Day staffed the application table set up in the hallway leading to the voting area. She explained the process to citizens as they arrived. "To vote, you fill out the (Virginia Absentee Ballot) Application Form. Some parts are prefilled, such as the Date of Election. The Reason Codes are on the back. No Social Security number is required. Then take it to Table 2 with the election officials, and they will verify the information. At Table 3, they give out the ballot and send you to marking tables, which is Station 4. The most important part? Put the ballot in the scanner," Day said.

Individuals who voted absentee in-person were subject to the same rules that applied to individuals who would vote at the polls on March 3. When the voting location closed at 5 p.m., Gofus reported, "We had a total of 110 voters vote at the North County Absentee Satellite office today." Absentee ballots are counted on election night, Tuesday, March 3 in the Central Absentee Precinct (CIP) and the votes are included with the absentee reported results according to fairfaxcounty.gov/elections/absentee.

The 2020 Virginia Democratic primary in the presidential nominating process will take place on "Super Tuesday," March 3. On that date, Virginia is one of the fourteen states as well as American Samoa, and Democrats Abroad that are holding a Democratic primary or caucuses.

Jim Schlett of Reston: We will be away on March 3. At this time, I'm voting for Pete. He offers a great alternative to Mr. Trump, especially in thoughtfulness.

Gail Schlett of Reston: Ditto to what Jim said. Pete offers a new perspective with his youth and vitality.

Marina Klusas of Oak Hill, with daughter Sedona, 4½: I'm going to be out of town Primary Day. Voting is always important, but now more than ever. It's especially important to have my daughter with me to see and experience the voting process. She's come with me every time and voted the first female President with me. I'm voting for Elizabeth Warren.

Beth Williams of Reston: I'm trying to get it done because I'm worried I won't have time due to work on March 3. I feel it is my civic duty to show him (my son, Adam, 16) the importance of voting.

Adam Williams, 16, of Reston: I'll just miss (voting in) the mid-term elections in 2022. I'm looking forward to it (voting) because I feel it is important to make my vote count in an election.

Sharon Canner of Reston: I'll be voting absentee and casting my ballot for Biden. He leads in the national polls in the swing states. This is important that my vote goes to Biden because of the importance of the swing states' impact. I'm also here sharing information about phone banks and efforts to support Biden.

Anna Neumann of Reston: I'm here to vote against Mr. Trump because he is destroying our democracy, the climate, animals and people in need.

Mary Jane Cochrane of Vienna: I'll be out of town on the day of the primary and I'm here early. From the Democratic list, I am hopefully optimistic that we will settle out of this big group on a strong candidate to oppose Donald Trump.