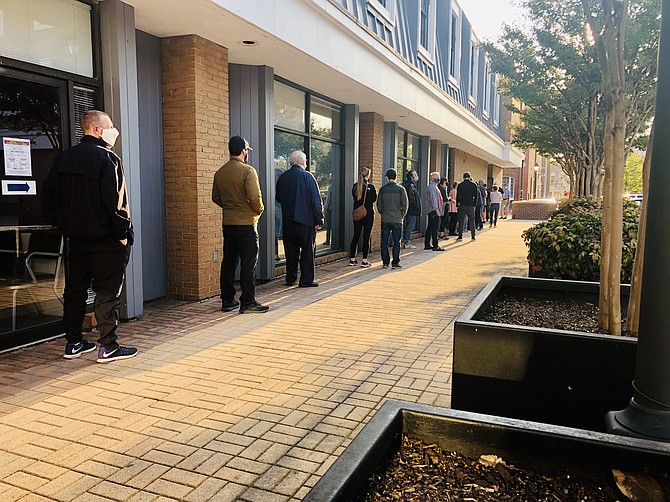 Eight out of ten voters in Alexandria cast an absentee ballot in the election last year. None of those votes were recorded in the precinct where those voters live. Photo by Michael Lee Pope.

On election night, Democrats were shocked by how well Donald Trump was performing in Alexandria. As returns were posted online, concerns were rising among supporters of Joe Biden as the incumbent was outperforming expectations at precinct after precinct. Trump was within striking distance of winning George Mason and Lyles Crouch. Ladrey Senior Building was tied. The Republican vote share at City Hall broke a new record of 59 percent. Trump got a higher percentage of the vote in 2020 at City Hall than Ronald Reagan did in 1980 or 1984.

"As the precinct totals started coming in, I was just getting these panicked texts from people. And I said, 'People, chill out. Calm down,'" said Alexandria Mayor Justin Wilson. "All these months we've been saying that election night totals would be different from the overall totals because of absentee voting, and sure enough here we are. People are freaking out and there's still two thirds of the vote that we don't know yet."

Meanwhile, 250 miles away in Roanoke, Sen. David Suetterlein (R-19) was having similar conversations with his constituents who were thrilled at the unexpectedly strong performance of the Republican candidate. Trump was winning precincts that were usually Democratic strongholds across his southwest Senate district. He warned his supporters that the numbers would shift when the absentee precincts reported, and then he says they were perplexed when it happened. That's why he introduced a bill that would require election officials to record absentee ballots in the precincts where voters live instead of separately in an absentee precinct.

“There's lots of things that we can do to restore confidence in elections," said Suetterlein. "But this, more than anything else, we can do so folks can clearly see the election results reflect the reality of the votes being cast in their community and in other communities across the commonwealth."

AS ABSENTEE VOTING has gained popularity in recent years, the value of precinct returns has declined. That trend took a dramatic scale this year as 80 percent of Alexandria voters cast an absentee ballot. That means the vast majority of votes were not recorded in the home precincts of voters where they live, rendering the precinct returns almost meaningless.

"Data breeds confidence, and so as voters see and understand how trends happen it helps build confidence in the system."

The bill introduced by Suetterlein to require election officials count absentee ballots in the precincts where voters live passed the Senate last week with an overwhelming bipartisan majority. Alexandria Registrar Angela Maniglia Turner says making that happen would require her office to have 30 different ballots available at her office for each precinct at her office for the 45 day period voters can cast an early ballot.

"It could potentially slow down the process because we'd have to check you in as a City Hall voter and then go to the City Hall pile and get your ballot," said Turner. "There's also print-on-demand technology that would alleviate the need to make projections based on how many voters we think are coming from each of our 30 precincts to vote absentee, however those machines come at a cost and it's not a cheap cost."

Only one senator voted against the bill: Sen. Adam Ebbin (D-30). He says he supports the concept in theory. But, he says, he's concerned about voters waiting in line while election officials print ballots, which might smear when they print.

"We heard about the goal of the bill, but we didn't hear about the implementation of how it gets done to my satisfaction," said Ebbin. "If it can be done I'm all for it. But Fairfax County expressed some hesitation."

AS THE LARGEST jurisdiction in Virginia, Fairfax County presents a complex challenge for election officials. If Suetterlein's bill is approved by the House and signed by the governor, the Fairfax registrar would need to figure out a way to present in-person absentee voters with 240 different ballot styles this fall. When the bill was considered in the Senate Privileges and Elections Committee, Fairfax legislative director James Heo asked lawmakers to oppose the bill because it would substantially increase the workload for election officials and present thorny logistical challenges.

"If Albemarle County can do it, why can't Fairfax County do it?" asked Sen. Creigh Deeds (D-25), chairman of the Senate Privileges and Elections Committee.

Fairfax County is the home of the Speaker of the House and the largest delegation of House members. So Suetterlein's bill is likely to get a grilling in the House Privileges and Elections Committee, where lawmakers are signaling they are not sure how the new mandate would work. One of the complicating factors for implementing the new requirement this year is the confusion that could be created by the once-in-a-decade redistricting process, which will create new political boundaries for the House of Delegates and state Senate seats.

"I fear catastrophe in order to get us a little more information," said Del. Mark Levine (D-45). "We had a really seamless and well-run election. I would hate to ruin that in the hope of getting some more information."

DATA ABOUT ELECTIONS is vital to elected officials, and even lawmakers who are critical of Suetterlein's timeline say they support implementing the requirement eventually. They share the goal of reporting absentee votes in a way that reveals a more complete picture of political geography. And they say posting election night returns in a way that does not dramatically shift when at-large precincts are included will avoid confusion and frustration.

"Data breeds confidence, and so as voters see and understand how trends happen it helps build confidence in the system," said Wilson, who has long been an advocate of including absentee votes in precinct returns. "When you get to a point where a locality as big as Fairfax County's election returns become a complete black box and it's just one super precinct, it does raise some concerns about transparency."