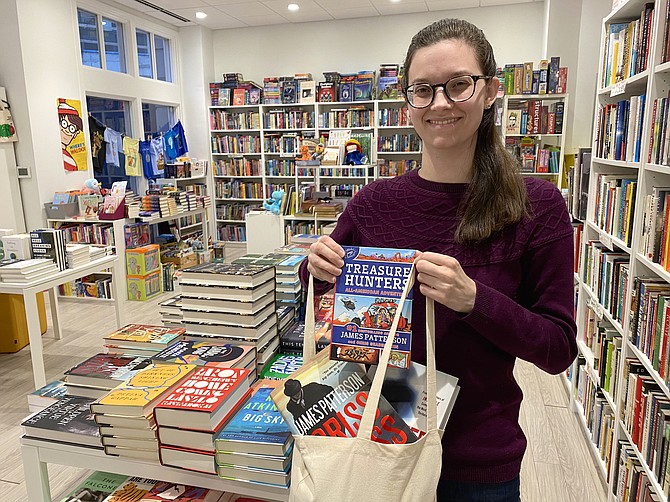 Emma Baum, a bookseller at Scrawl Books in Reston, received a holiday cash bonus from best-selling author James Patterson known for his support of independent bookstores and booksellers. Partnering with the national not-for-profit trade organization, American Booksellers Association to distribute the funds for his 2019 Holiday Bookstore Bonus Program, Patterson granted bonuses of $500 to 500 individual booksellers totaling $250,000. Baum received her bonus in recognition of outstanding work after being nominated by Molly McMahon, Scrawl Books manager. The grant application asked one question: Why does this bookseller deserve a holiday bonus?

"Emma is the person who has her hand on every moving part of operating the bookstore. Even if it's not in her purview, she jumps right in," said Mahon. "I nominated Emma for many good reasons but primarily because of her attention to detail and her willingness to spend any amount of time and effort to help customers find the right book. She makes a difference," said Mahon.

According to Patterson, his writing career "is characterized by a single mission: to prove that there is no such thing as a person who doesn't like to read, only people who haven't found the right book."

"Patterson has demonstrated again and again just how strong his support is for the independent booksellers who introduce readers of all ages to the authors and titles that are most likely to spark and deepen their joy of reading,” said American Booksellers Association CEO Oren Teicher. "For the past several years, indie bookstores in the United States have benefitted from the largesse of one individual who has quite literally put his money where his mouth is... Since 2014, James Patterson has contributed $2.35 million to indie bookstores and indie booksellers," he said.

Baum, who is a 2009 South Lakes High School Reston alumna, said that she did not know about the nomination until she received an email announcing she was a winner. "I was really excited to tell Molly and pleased for Scrawl Books. I love this little bookstore, and I want people to come to find us. We're right across from Balducci's," Baum said.