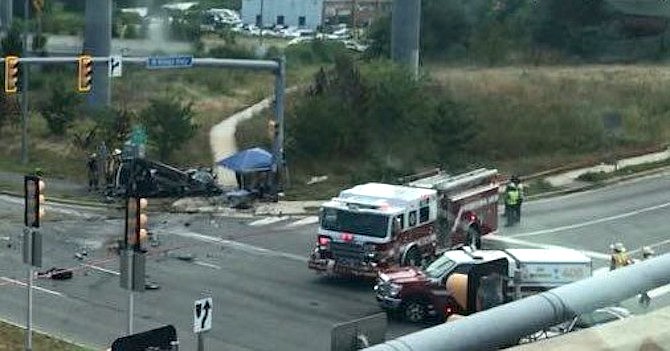 Emergency vehicles on the scene at the intersection of North Kings Highway and Telegraph Road following the crash that killed Robert Bloom. Photo by @soypanaa via Twitter 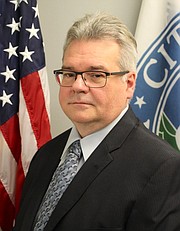 City employee Robert Bloom was killed in a fatal car crash the morning of July 20. He was 61.

Robert Bloom, the Public Safety Systems Administrator in the Department of Emergency and Customer Communications (DECC) for the City of Alexandria, died July 20 after his SUV struck a traffic pole at the intersection of North Kings Highway and Telegraph Road in the Huntington section of Fairfax County. He was 61 years old.

According to police, the crash occurred around 9:24 a.m. when a 2018 Honda CRV driven by Bloom struck the pole while traveling westbound on North Kings Highway. Bloom, the sole occupant of the vehicle, was pronounced dead at the scene.

Debris from the crash caused damage to a second vehicle but the driver was not injured. The intersection remained closed for several hours as police investigated.

Bloom joined the city in 2016, following previous roles with the Metropolitan Washington Airports Authority, the City of Baltimore and telecommunications vendors. After beginning his career in a small county 911 center in Pennsylvania, Bloom helped implement nearly every advancement in 911 technology over the next three decades.

The city’s website said it was “devastated by the loss” of Bloom.

“Bob was an extremely dedicated and talented professional, whose 30-year career in public safety demonstrated a deep commitment to saving lives and serving people,” read the statement. “His technical expertise, industry knowledge and practical experience helped protect first responders and the communities they serve.”

Bloom earned several of the top certifications in his field and was regarded as a national leader in public safety telecommunications. He chaired the 2019 international convention of APCO International (the global organization of public safety communications professionals) and served on APCO's cybersecurity committee.

In 2020, Bloom led Alexandria to become the first city in the United States to enable staff to answer 911 and 311 calls from home. This helped DECC reduce the risk to staff from COVID-19 and ensure continuity of service to the community.

The cause of the crash remains under investigation. Anyone with information is asked to call 703-280-0543.