‘A Passion for Video Production and Film’ at Fairfax Academy
Votes

‘A Passion for Video Production and Film’ at Fairfax Academy 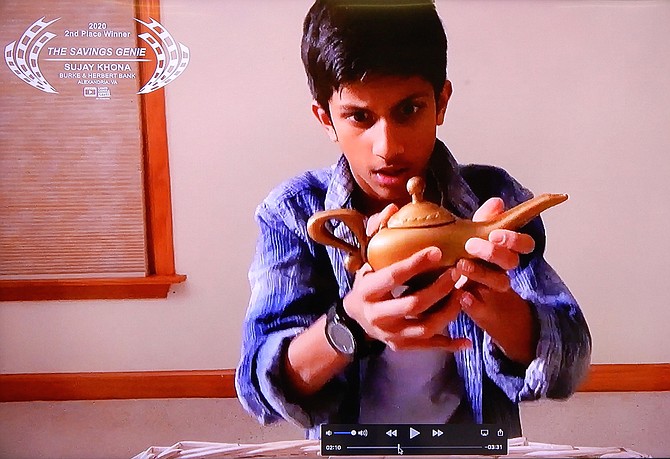 A scene from Sujay Khona’s video with his award listed at top left corner. Photo by Bonnie Hobbs. 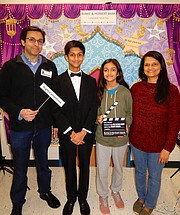 Sujay Khona loves creating videos, so it was only fitting that he found out he won a national award via video. He did so last Wednesday, Feb. 26, during his Television and Media Production class at The Fairfax Academy.

The video he made, “The Savings Genie,” recently won first place in the Burke & Herbert Bank regional contest for the American Bankers Association Foundation “Lights, Camera, Save!” video contest. Each 90-second entry had to illustrate to teens the importance of saving and using money wisely and were judged on their quality, message, content and overall appeal.

Then, as the top video in Northern Virginia, Khona’s entry advanced to the next level of competition, representing Burke & Herbert Bank on the national stage. In it, a genie gives Khona advice on why and how to save money. Voting on social media determined the winners. Just three were selected, and Khona ultimately captured second place and a check for $2,500.

His and the other two winning videos are now on YouTube and will become part of a national campaign to make sound money-management relevant to teens. And in celebration of Khona’s accomplishment, Burke & Herbert Bank representatives threw him a party last week, during class, in front of his classmates and family.

“Everything in this class has been very helpful and useful,” said Khona, 16. “I’m very excited and I thank all the judges. It’s a great opportunity.”

WITH A NOD to his video, the bankers brought in a cake decorated with a genie’s lamp atop. But before it was cut and shared with his classmates, Khona’s teacher, Matthew Balthrop, and the bankers addressed the students. Then the top three videos were shown – and that’s when Khona learned that his was second in the nation.

Balthrop praised both him and classmate Josabeth Hailu, whose video came in third in the regional contest. “When you start a project, there are always going to be obstacles that get in the way,” said Balthrop. “But I’ve learned that all you have to do is ask or try. There’s no problem in failing, because failure teaches us.

“So, Josabeth and Sujay, I’m glad you both entered the competition and succeeded,” he continued. “In the film industry, you’ll hear more ‘No’s’ than ‘Yes’s’ – but it doesn’t mean you should stop trying. And today, I want all you students to celebrate their success with them because you influenced them.”

Jane Petty, a Burke & Herbert vice president, said she was delighted that, this year, Fairfax County had finalists in the competition. “This is super-exciting; congratulations,” another Burke & Herbert vice president, Sandra Vasquez, told the students. “This is a great program and an opportunity to showcase what you can do. Our focus is helping prepare the future leaders of our community. We’re here to support you, and I know Jane and her team worked hard on this program.”

Balthrop said he teaches his students the entire film-making process, from production to creation. As for Khona, he said, “I think Sujay has done a great job in taking a subject that could potentially be dry for his age range and making a unique and engaging video that encourages teens to save money. I’m really happy for him.”

So what’s Khona going to do with his prize money? Save it, of course – for college. “My dream college is USC [University of Southern California],” he said. “I want to major in film and video production, and that’s what this class and the bank has helped me do. In class, we learned framing and lighting techniques and how to write a script and plan.”

Eventually, he hopes to become a film director, editor or producer. “Being a director would be cool,” said Khona. “I like action and more dramatic things, but I also enjoy making short videos like this one.”

HIS SISTER, Bhavika, an eighth-grader at Franklin Middle School, played the flute in the background of her brother’s video. And she and their parents were pleased to be at the celebration in his class at The Fairfax Academy.

“He loves making videos, and this contest gave him an opportunity to use his skills to motivate teenagers to save money,” said Khona’s mother, Deepti Khona. “And all aspects of the video – the writing, directing, filming and editing – were done by him.”

“Sujay always had a passion for video production and film – it’s something he enjoys creating,” said his dad, Dhiren Khona. “We’re proud of him. And his teacher is really good and helped us better understand this new field.”