‘We Will Never Forget’ in Alexandria
Votes 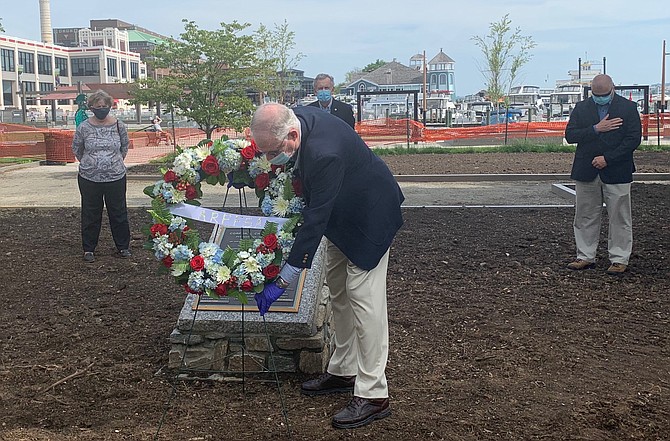 Members of the Alexandria Police Department Honor Guard open a ceremony honoring slain officers May 15 at the Fallen Officers Memorial at APD headquarters.

A tribute to Alexandria’s fallen law enforcement officers was held May 15 at Waterfront Park and Alexandria Police Department headquarters as part of a scaled down National Police Week due to COVID-19 restrictions.

“Despite the current situation across the country, it’s important that we take a moment to remember those individuals who gave their lives and made the ultimate sacrifice in terms of public safety,” said Police Chief Michael Brown as a wreath was placed at the Fallen Officers Memorial in Waterfront Park. “The sheriff’s deputies and police officers who came before us – we will never forget.”

Traditionally, National Police Week sees tens of thousands converge on the Washington, D.C. area to participate in events honoring fallen local, state and federal law enforcement officers from across the country. Amid travel and gathering restrictions due to the COVID-19 pandemic, national events were canceled or streamed online.

Locally, two smaller events were held honoring the city’s fallen sheriff’s deputies and police officers. At Waterfront Park, a wreath was placed at a memorial inscribed with 16 names, dating back to Constable Elijah Chenault, who was the first reported officer killed in the city in 1823.

“It’s important that we remember those individuals who gave their life and made the ultimate sacrifice. We will never forget.”

“It’s a sobering moment,” said retired police captain Ken Howard at the Waterfront Park ceremony. “I was personally involved with two of the names on that plaque. People need to remember, and this is what we are here for.”

At police headquarters, the APD Honor Guard opened a scaled back ceremony at the Fallen Officers Memorial with Brown delivering his remarks before red carnations were placed at the markers of the slain officers.

“This is an important memorial,” said Willem Polack of the Alexandria Police Foundation, the organization that funded the memorial. “This represents our fallen officers, those who selflessly gave their lives on behalf of the citizens of Alexandria.”