Remembering the Fallen of Alexandria
Votes

Remembering the Fallen of Alexandria

Honoring the sacrifice of local veterans. 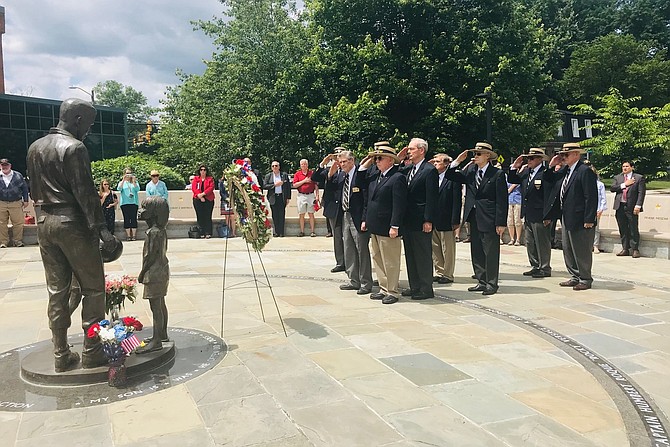 Members of the United States Military Academy class of 1959 salute after placing a wreath at the statue of classmate Humbert “Rocky” Versace during the Memorial Day Ceremony May 27 at the Captain Rocky Versace Plaza and Vietnam Veterans Memorial in Del Ray. Photo by Janet Barnett/Gazette Packet 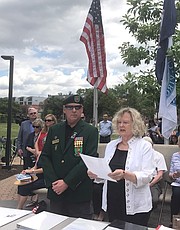 Susan Harvey reads the name of her brother, 1st Lieutenant Lawrence E Lilly, who was reported missing in action in 1971, during the May 27 Memorial Day ceremony in Del Ray. His is the 68th name engraved at the Rocky Versace Plaza honoring Alexandria’s fallen Vietnam Veterans. With her is David Jackson, vice president of Special Forces Association Chapter 11. 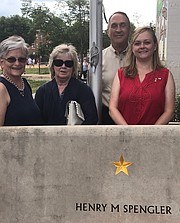 Bette Spengler Meuleners stands behind her deceased husband’s name, Alexandrian Henry M. Spengler, with sister-in-law Pat Spengler, brother-in-law Jim Spengler and daughter Melissa Spengler-Hendrickson at the May 27 Memorial Day ceremony in Del Ray. Bette was pregnant with Melissa when her husband was taken captive in Vietnam in 1972. 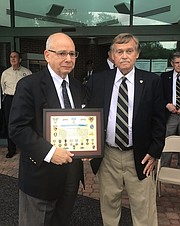 Former City Councilman David Speck, left, is presented a certificate of appreciation May 27 by Friends of Rocky Versace representative Mike Faber for his efforts and support of the plaza in Del Ray honoring Alexandria’s fallen Vietnam veterans.

Family and friends gathered May 27 at the Captain Rocky Versace Plaza and Vietnam Veterans Memorial to pay tribute and honor the service of Alexandria’s fallen Vietnam veterans on Memorial Day.

Each of the 68 names of Alexandria’s fallen or missing in action Vietnam veterans was read aloud as part of the ceremony. West Point class of 1959 classmates of Humbert “Rocky” Versace placed a wreath at the statue of Versace, who was captured in 1963 less than two weeks before the end of his second tour of duty.

Versace was reported killed by his captors in 1965 and posthumously awarded the Medal of Honor for his heroics during his captivity. His remains have never been found.

Surviving family members of Alexandria’s fallen in attendance included Bette Spengler Meuleners, whose husband Henry Spengler was taken captive in Vietnam in 1972 while she was pregnant with their daughter Melissa, who was also in attendance.

Susan Harvey, sister of 1st Lieutenant Lawrence Lilly, read aloud the name of her brother as part of the ceremony. Lilly’s name was recently chiseled in the granite memorial, marking the 68th name to be added to the list of Alexandria’s fallen from Vietnam.

After reading a history of the Rocky Versace Plaza, former City Councilman David Speck was visibly moved when presented a certificate of appreciation for his support in establishing Alexandria’s Vietnam Veterans Memorial.

Also participating in the ceremony was the Saint Rita’s American Heritage Girls Troop 1381, who led the crowd in the Pledge of Allegiance, and Miss Northern Virginia Abigail Farley, who sang the National Anthem and God Bless America.

Mike Faber, representative of the nonprofit Friends of Rocky Versace organization, presented Jim Spengler, director of Parks, Recreation and Cultural Activities and brother to Henry Spengler, a ceremonial check for $16,715.44, representing the cost of maintenance and repairs to the plaza.