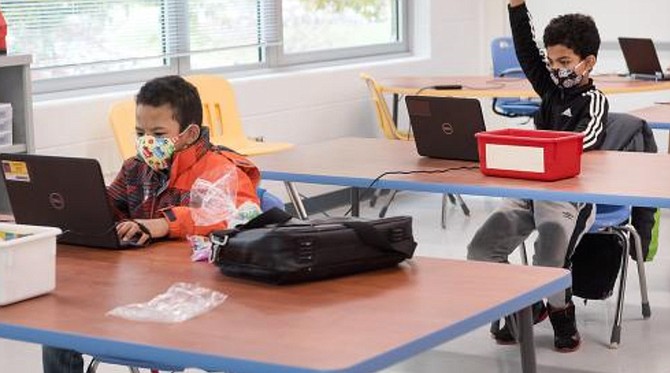 (Click on "Download .JPG" to see large chart.) The right-hand side of the bar graph shows the net migration trend at FCPS for SY 2020-21.

Fall membership as of Sept. 30, 2020 at Fairfax County Public Schools declined by 8,859 students dipping to 180,151 compared to data recorded last year at the same time, according to Assistant Superintendent of Facilities and Transportation Services Jeff Platenberg. That could be a problem if the trend continues.

The Membership Trends Report, SY 2020-21, presented by Platenberg to the School Board on Nov. 4 found that division-wide total membership dropped 5 percent for SY 2020-21. Platenberg said changes in membership occurred at all school levels with the most significant decline in happening at the elementary level, -7,729. The information was part of the Virginia Department of Education Student Record Collection 2020-21 that is collected four times a year, Fall, Spring (through March 31), End-of-Year and Summer.

The student attendance counts are known as “average daily membership.” The drop could potentially put millions of dollars in basic aid funding by the state as well as County funding in jeopardy. Virginia's public schools are financed through a combination of state, local and federal funds. The apportionment of state funds for public education is the responsibility of the Virginia General Assembly, through the Appropriations Act. General fund appropriations serve as partial state support augmented by retail sales and use tax revenues, state lottery proceeds, and other sources.

Elaine Tholen, Fairfax County School Board, Dranesville District, chaired the Nov. 4 work session. According to Tholen, understanding the County's membership trends would be the initial driver and basis for the board's considerations as it began its Capital Improvement Program (CIP) season that ran through February 2021. School capacity, program locations, capital planning and construction projects hinged on enrollment data. Tholen said, "This is for informational purposes."

According to Membership Trends Report, SY 2020-21, three factors affected the change in total student membership. They were the birth to kindergarten ratio, net migration, which is the total of new students entering the school division added to those leaving the division, and the number of transfers within the division. Referencing a PowerPoint, Platenberg said he found the kindergarten membership decrease for a total of -2,208 students "most interesting." "It resulted in a birth to kindergarten ratio from 87 percent to 75 percent and that's a significant decline worthy of note,” he said.

NET MIGRATION changed from 1,725 students in SY 2019-20 to a drop of -4,953 students in SY 2020-21. In other words, 6,678 more students withdrew from the division than entered. Whether or not the downward trend was temporary would depend on many factors, including the future course of the pandemic and economic conditions, according to the Trends Report.

Student withdrawals over the summer, those students who were reported active in the Student Record Collection from the previous school year and did not return by Sept. 30, contributed to a negative net migration for SY 2020-21. Summer withdrawals increased to 12,317 from 8,893 students in SY 2019-20. Whereas the top three withdrawals reasons in 2019-20 were to attend other schools, in SY 2020-21, home schooling skyrocketed to reason number three, increasing from 152 students to 1,584. Platenberg said, “This withdrawal information is particularly interesting given the pandemic."

During discussion, Laura Jane Cohen, Springfield District School Board Member, said principals told her that families who had pulled their kindergarteners out of the county school system would come back to school on Nov. 16. They were "going to throw them (their kindergarteners) into the mix.” “Then...I'm hearing from folks who decided to delay enrolling their kindergarteners, and we'll have them enrolled next year, which would cause massive fluctuations," she said.

Platenberg said when the school system had “outliers,” it was best to proceed with caution and not make any drastic changes. "We have staffing at the levels that were provided from the prior year...What we have seen (enrollment decrease) is an aberration," he said.

Megan McLaughlin, Braddock District School Board Member, said the decrease in student enrollment, 8,859, was “incredibly concerning” to her. "We’re talking not just about CIP impact but if my calculations are correct, that could be as much as $132M or more in estimated expenses and funding. What’s going to happen to our budget?” Brabrand said he did not think the numbers at the elementary school level were going to stay that low. “Most of those people I believe will come back to FCPS.” Trying to head off potential future budget losses at the state level as well as the county level if enrollment did not increase, McLaughlin asked Leigh Burden, Assistant Superintendent Department of Financial Services, “Are we just going to wait till next March to find out what the state might do?” McLaughlin called attention to possible public comment to lower County funding if Schools “usually get more money when there are more kids...the inverse would be then the expectation.”

IN AN INTERVIEW days after the session, State Sen. Jennifer Boysko (D-33) said, “There are no further education related amendments from the Governor that will be considered by the General Assembly this year…(Nov. 9) the Senate will be going back into session to consider other amendments to the budget and to the legislation passed in the Special Session. In Special Legislative Session, the General Assembly made a number of policy changes to provide more flexibility and support our local public schools. For example, understanding the drastic changes in the school attendance due to the COVID-19 pandemic, the General Assembly has delayed the mid-year adjustment to state payments based on ADM projections until after the final March 31 ADM is calculated.”

In the Meantime, on Nov. 6, Fairfax County Federation of Teachers reported that Fairfax County’s COVID positivity rate was at 5.3 percent and questioned if the numbers were safe, posting: “Why is @FCPSSupt forcing staff back into schools right as our numbers worsen? @BostonSchools closed when they surpassed 4%.” Earlier that week, Arlington County Schools announced it was delaying plans for in-person learning, “a safety risk” wrote Superintendent Francisco Durán. Anne Arundel County Public Schools followed suit.

FCPS retweeted it was hiring classroom monitors to assist students in the classroom while their teachers work virtually. “Earn $15.42 per hour. High school diploma or equivalent experience required.” Work was hourly with no benefits.

FCPS continued its plans for early Head Start, PreK and Kindergarten, students with intensives support need and deaf/hard of hearing to return on Nov. 16 and students in grades 1-2 and those at specialized career centers to return on Nov. 30.