The Other Alexandria: A Teacher Made A Difference – Joseph (Joe) Lovelace
Votes

The Other Alexandria: A Teacher Made A Difference – Joseph (Joe) Lovelace 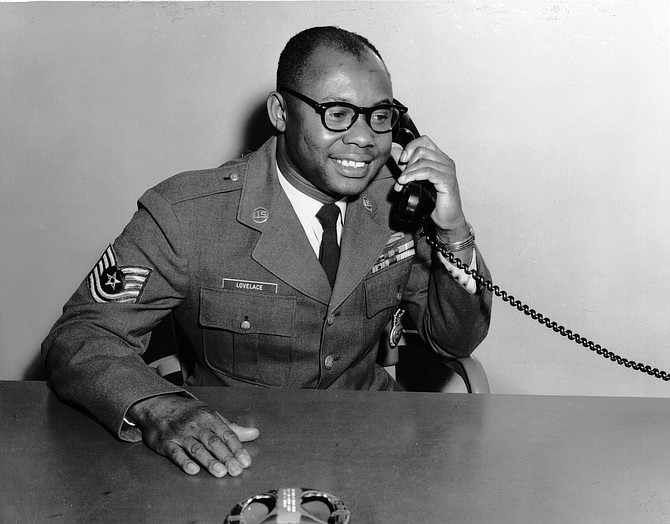 Joseph Lovelace in Germany in 1963.

Andrew came to Alexandria to visit his boys but he was really looking for a better life. They found him a job as a laborer. Unfortunately, Andrew was not aware that he had a heart problem. At the age of sixty, he began working as a laborer. The hard work affected his heart. Eventually he passed away and his body was returned to Halifax, Va where his wife, Ludora and his youngest son, Joseph Lovelace lived. After the funeral, his widow and youngest son, Joseph came to Alexandria. The mother and son moved in with her older son, John Henry Lovelace at 611 North West Street.

The move to Alexandria was the beginning of Joseph’s lifelong career. He enrolled in Parker-Gray School in September 1942. With his bubbly personality, he made many friends.

He became the clown in his class. His teacher, Mrs. Edith Williams-Casey, a firm educator, did not buy into all that foolishness. She had a serious talk with Joseph that helped him get his act together.

Joe graduated from Parker-Gray in 1948 and joined the Army. He always remembered Mrs. Casey’s comments. He excelled in everything he did.

Mr. Lovelace had 30 years of combined service in the Army and the Air Force. His military career took him to foreign countries like Germany, Korea, England, France and Japan. He lived in Germany, Virginia, Maryland, New Jersey, Pennsylvania and Utah, and finally settled in Denver, Colorado.

After retiring from the military, Joe worked with the United States Postal Service (USPS) and earned his undergraduate degree in Criminal Justice in three years. He retired from USPS with 15 years of service. After retiring from the Postal Service, he worked for the police department as a counselor. At the age of 82, he volunteered at the Police Department in Colorado.

Joseph B. Lovelace was born in Halifax, Va. on Dec. 22, 1929 to Andrew Lovelace and Ludora Hawkins.

His parents had twelve children including him. The parents were sharecroppers in Halifax. Their migration to the northern cities improved their lives. Most of Joseph’s siblings migrated to Philadelphia, but one of his brothers, William stayed in Alexandria with his wife and children. His sister-in-law, Alberta and her children also stayed in Alexandria. Today, John, William and Alice Lovelace’s children, grandchildren and great-grandchildren are living in the Northern Virginia and the Maryland areas. They are all the beneficiaries of the four brothers who migrated to Alexandria over eighty years ago.

Joseph B. Lovelace, soon to be 91 years old on Dec. 22, made a good life for himself because a caring and loving teacher told him the truth about life, and not to spend his time in class as a jester.

Mr. Lovelace is now living in Aurora, Colorado with his family.