The Other Alexandria: The Other History of Fishtown – Dogan Family
Votes

The Other Alexandria: The Other History of Fishtown – Dogan Family 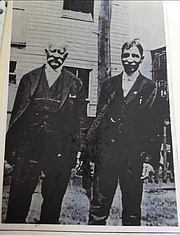 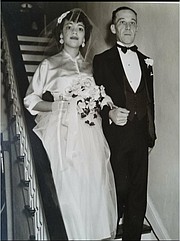 Betty Dogan with her father, William S. Dogan II, on her wedding day.

The weather in May of 1861 was cooler than usual and that affected many of the outside businesses in Alexandria; this was especially true with the Fish Wharf. Lower May temperatures also caused fewer fishing activities. The Civil War also had begun and many Union Army troops were in Alexandria, and their large presence in the City curtailed outside activities for the residents.

In his claims’ folder, he described the destruction of their enterprise by the Union. The Union used the lumber from his business for fuel. He said he ran his business during the fishing season, and once the fishing season was over, he stored the oaks and hay in the buildings. In the claim’s folder, he also said that he shared one-third of his mother’s property with his siblings, Governor Dogan and Susannah Dogan Carter. After listing all the losses, he came up with an amount of $500.

As he was awaiting payment from the government in 1874, Robert became a barkeeper on Union Street near Oronoco Street. In 1878, the Federal government only awarded him $90 for all his losses.

The Dogans in Alexandria were free people of color. They had been free as far back as the 1700s. They were skilled laborers, entrepreneurs, firemen and politicians. They lived in Alexandria during the time when Alexandria was part of Washington, D.C. They witnessed the Civil War, Reconstruction and Jim Crow eras.

Unknown to this generation of Dogans, their family had a front row seat at historical events going back to the 1700s. The history of Alexandria is their history. The Dogans should be proud to know that the new waterfront in Alexandria (the section of Old Fishtown), was the area their family settled when it was a thriving fish wharf. It is now a tourist attraction with restaurants and hotels.

Mrs. Betty Dogan Roberts Nicholas and her nephew, Christian Bentley, shared their family pictures and stories for this article.