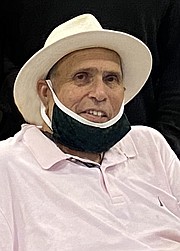 Lester (Les) Zidel, 74, of Herndon died on Oct. 9, 2020. Born in Reading, Calif., he was educated in Malden, Mass., and later attended Boston University. Transferring to Wisconsin University, Les became active in politics and student government. In 1968, he received his degree in Political Science from Wisconsin.

Les is survived by his brother Howard Zidel of Salem, N. H., his sister-in-law Linda Crowe-Zidel, niece and kindred spirit Leia Jane Mellott of Methuen, Mass., and her husband, Peter Mellott. Les also leaves behind his closest and dearest friend, Jason Finklestein, who resides in N. Y. They were friends for over 60 years and grew up together in Malden.

According to his brother Howie, Les loved so many things, his Boston hometown sports teams – Celtics, Patriots and Red Sox, the ocean and memories of family vacations on Cape Cod and the seashore of Maine. He loved the theater, music and the arts but the things he loved most outside of family and friends were politics and a lively discussion. “He was a master of critical thinking and loved to learn and self-educate,” said Howie.

Fellow Rotarian and long-time friend, Richard Downer said Les was brilliant. “The ultimate Renaissance Man. He read everything and was always kind and gentle, unless he was angry about politics.” Les also thought about his adopted “home” town of Herndon. With unwavering and selfless acts, Les served to make the Town the best it could be.

HIGHLIGHTING the many recognitions for his remarkable achievements, Les received the following awards: Rotarian of the Year 1987, Herndon Chamber of Commerce Business Citizen of the Year 1992, Town of Herndon Distinguished Volunteer 2010, and Herndon Community Cultural Arts Center Citizens' Advisory.

Les received multiple proclamations, among them the Town of Herndon Proclamation 2016, for his essential service on the Herndon Festival Executive Committee and Festival's development, execution, and growth. The Festival's expansion and success would not have occurred without his dedication and involvement. Les ushered Festival from a small two-day event to one that ran four days earning awards and statewide recognition.

Les also served on the Town's Planning Commission from 1986-1995. With unwavering and dedicated service, he challenged the Town to reach toward the future by asserting innovative planning ideas and applying them to decision making. Former Chair of the Planning Committee, Charlie Allen called Les an extraordinary man. “I served with Les on the Town’s Planning Commission where he was a leader, thinking about Herndon’s future and development. More than anything, he was an intelligent, warm and close friend.”

Fellow Councilmember Cesar del Aguila added that not only was Les a good friend, they became friends because Les was patient, understanding, forgiving and loved diversity in people and thoughts. “He always saw the diversity in people and places…(and) found something special in Herndon and its people. I think he saw our potential. We were lucky to have him here helping us to improve as a town and as better people,” said del Aguila,

Les co-authored the "Think Village" concept for the Downtown, which contributed to the Town's Village Streets Policy. Mayor Lisa Merkel said Les was one of the smartest, most compassionate, big thinkers she ever knew. “Much of what I know about municipal financing, the arts and creating community spaces I learned from Les… I will always treasure our marathon conversations and that the last words he ever said to me were, ‘I love you, my dear.’ I will miss him every day,” said Merkel.

According to Downer, Les was the driving force for the Arts in Herndon. They meant the world to him. Les founded Elden Street Players in 1988, later known as NextStop Theatre Company. He also co-founded Herndon Foundation for the Cultural Arts in 2003, which merged to form Arts Herndon. Les served as an executive board member for each nonprofit organization and volunteered thousands of hours between the two. Downer said, “If we ever get that art center, The Zidel Theater for the Performing Arts would be such an appropriate way to honor Les.”

FRIEND AND VICE MAYOR Sheila Olem said, “I lost my friend Les Zidel Friday. For the past 20 years when Les and I would talk late at night, he would say ‘Bed Check, little sister’ as he was calling to see if I was safe at home. I will miss my friend and mentor every day.”

Les loved everyone he met, and his rich, deep voice, hearty laugh, and even those marathon phone calls will be missed.

Arrangements for a Celebration of Les’s Life will be announced when all can safely gather.

In the meantime, if you are so inclined, the family arranged for memorial gifts in Les Zidel's memory be made to Arts Herndon, a 501(c)3 nonprofit organization, EIN 52-1432391. Visit https://artsherndon.org/donate-arts-herndon to learn more.