‘We Hear Things We Never Want to Hear’ in Sully District 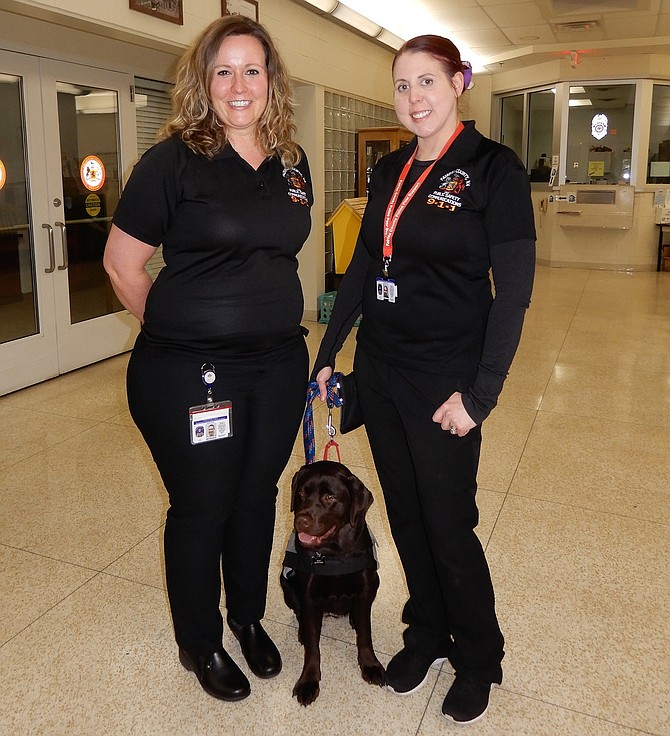 In times of crisis, dispatchers are a lifeline between callers needing help and the first responders who can provide it. And two Fairfax County dispatchers – Public Safety Communicators Marie Keith and Jennifer Heflin – recently explained their jobs to the Sully District Police Station’s Citizens Advisory Committee.

“Everyone starts out as a call-taker,” said Keith. “And as they get better, they can ask to be trained as a fire or police dispatcher. Our motto is, ‘Call if you can; but if you can’t talk and need to stay quiet, then text us.’ But know your location.”

This summer, the call center transitioned to AT&T’s Next Generation 911, an easily adaptable, advanced 911 platform resulting in more-accurate call routing and reduced response times. And eventually, it’ll be able to receive callers’ streaming media and photos, too.

“We answer 95 percent of our calls within 10 seconds,” said Keith. “The only time there’s a delay is when there’s a really big event – such as when a tractor-trailer and five cars were on fire after a crash on I-66 – and everyone is calling us at once. Several of our people are bilingual, and we can get interpreters. But these calls also take longer.”

Keith said landlines provide the best information, although cell phones are improving. But, she said, “We still rely on callers to give us their address. Just because we’re asking questions doesn’t mean we’re not sending you help. We need your information, especially in a medical situation.”

Besides, said Heflin, “If you call from a cell phone – not from your home – and just say, ‘Help,’ and hang up, we have no idea where you are. And you can’t send pictures or video to 911, but we’re working on that technology.” The county’s new system will enable it to receive information from Smartwatches, fire and burglar alarms and car sensors, as well.

Meanwhile, she said, “If you’re in a high-rise building, we can’t tell what floor you’re on, unless you tell us. But we’re trained to hear things in the background and understand your tone of voice [to know if you’re in danger].”

“As long as you can communicate and let us know you have an emergency, we can try to help you,” added Keith. “You can even call and say you’re ordering a pizza. And when we tell you you’ve reached 911, you can repeat what you said – and we’ll understand you’re in trouble and can’t talk.”

THE COUNTY has 157 dispatcher positions on four squads – two day and two night – working two days and off three days, in 12-1/2-hour shifts. “We’re always there, including weekends, holidays and snow days,” said Keith. About 40 people are working at a time, including 11 call takers, plus other staffers. They each receive 12 weeks’ classroom training and six to 12 weeks’ on-the-job training. They must also be able to multitask, prioritize and make quick decisions about who needs to respond and where.

Dispatchers answer calls via their headsets and then direct them via keypad to the best entity to help the caller. “Our shifts are split between being on the phone and on the police radio or fire dispatch,” said Keith. “Supervisors make sure we’re doing our job right. And with more training, dispatchers can become call-taker trainers and hostage and crisis negotiators.”

She and Heflin handle calls involving both the Fair Oaks and Sully police districts, plus county police headquarters and the police helicopter. So it’s critical that they’re able to prioritize things, especially during life-and-death emergencies.

They’re also trained and certified in Emergency Medical Dispatch. For example, said Keith, “I can instruct you in stopping bleeding, giving CPR or doing the Heimlich maneuver before the ambulance gets there. And we’re doing screening for coronavirus to keep our first responders safe, as well.”

Heflin said they even have a script to read for specific situations, such as childbirth. And keeping the caller calm helps everyone.

“Dispatchers deal with a lot of calls and can’t mentally prepare for them in advance,” added Keith. “We hear things we never want to hear – and we sometimes hear the last words someone speaks.”

As a result, Heflin helped establish a new, peer-support team for the dispatchers. “In August 2018, I took a call from a 15-year-old girl shot twice in the chest by her mother – and her 5-year-old sister was dead in the other room,” said Heflin. “So I had some serious issues to work with after that, and I wanted others dealing with these things to be able to get help.”

She then rebuilt the peer-support team, including K9 Sully, who stays with her. “I work with all four squads for interaction and training with Sully,” explained Heflin. “So we have several initiatives to make sure we’re all OK. I’m getting closure with this program, and Marie and I created a team that everyone can go to when they need help.

“The peer-support team has been really great,” said Keith. So besides coming to the aid of callers in need, she said, “We can help other dispatchers after particularly tough calls.”

THE 911 call center is in the McConnell Public Safety and Transportation Operations Center on West Ox Road in Fairfax. For more information – including how to become a dispatcher – go to https://www.fairfaxcounty.gov/911/.