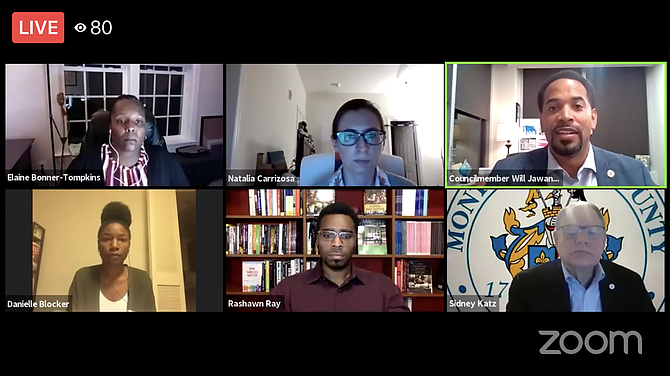 “I can tell you some of the officers that are advanced in mental health training from Montgomery County are some of the best that I’ve seen,” said Ray, professor of sociology at the University of Maryland. “That is something that needs to be replicated throughout the department, the county and region, and throughout the country.”

“This data is crucial,” said at-large Councilmember Will Jawando, who held a Town Hall on Reimagining Public Safety on Sept. 10, 2020; more than 3,500 people have seen the recording.

“I saw disparities here, and that’s in every arena.”

“I became a civil rights lawyer because I saw disparities here, and that’s in every arena, whether it was education, in health care, in our transportation infrastructure, and certainly as a young black man in policing and the criminal justice system,” said Jawando, who grew up in Montgomery County. “People have disparate experiences with law enforcement.”

While the Office of Legislative Oversight tracks important data, there are many categories not being tracked that have a corrosive effect on entire communities and how they view policing, Jawando said.

“If you’re a white person in Bethesda, you have a different experience of policing than if you’re a black person in Briggs Chaney,” Jawando said.

WHITE BOARDS hang in most police stations across the country.

“We’re not unique in this way. This is a federal, state and local problem where you have a white board in a police station, and at the top, you have the officer with the most arrests and stops, and at the bottom, you have the officer with the least arrests and stops,” Jawando said. “There’s an implicit and explicit expectation that you go and get those numbers. When you have that type of structure, where are you going to go? You’re going to go where your biases are, where you think there is crime, where you’re deployed in communities that are already disproportionately interacting with police.”

Danielle Blocker, president for Young People for Progress, asked how we are going to decrease the number of negative interactions between police and black motoritists. She suggested moving traffic enforcement to the Department of Transportation.

IN THE PROCESS of “reimagining public safety,” we ask questions such as these:

What if all Montgomery County officers are trained in mental health diversions and deescalation?

What if officers are paid to be trained not for the 24 weeks Montgomery County offers, better than most jurisdictions, but for three years like officers in Europe?

What if School Resource Officers were replaced with school counselors and nurses to permit a ratio of adults to students that enables all students to have trusted adults they can access and talk to in schools?

What if officers are paid salaries that permit them to live in the parts of the county they serve? What if we had a diverse police force, matching the population?

“There are people watching across the country to see what Montgomery County is doing,” said Ray.

AT ITS LAST session before the summer break, the Council unanimously passed Expedited Bill 27-20, Police-Regulations-Use of Force Policy on Wednesday, July 29. The new policy requires the Montgomery County police chief to adopt a Use of Force Policy aimed at safeguarding all community members from excessive use of force by police.

The action establishes a Use of Force Policy that prohibits a police officer from using deadly force except when absolutely necessary, as a last resort, when no other alternatives are available.

The legislation requires police officers to stop or attempt to stop the use of excessive force or the commission of a crime by another officer. Police officers who intervene to de-escalate the excessive use of force must not be retaliated against or disciplined for taking action.

The action makes the use of deadly force the choice of last resort to protect one's life or the life of another or against serious bodily injury, and there must be no other alternative for less lethal force existing at the time of the police action.

Prohibited are neck or carotid restraint and striking a restrained individual.

The action limits police from using deadly force against a fleeing person and limits no-knock warrants.

The action prohibits shooting at moving vehicles, unless the vehicle is being used as a weapon and the circumstances would authorize the use of deadly force.

“You all are definitely ahead of the curve,” said Ray.