Trailblazer broke the color barrier of the NBA 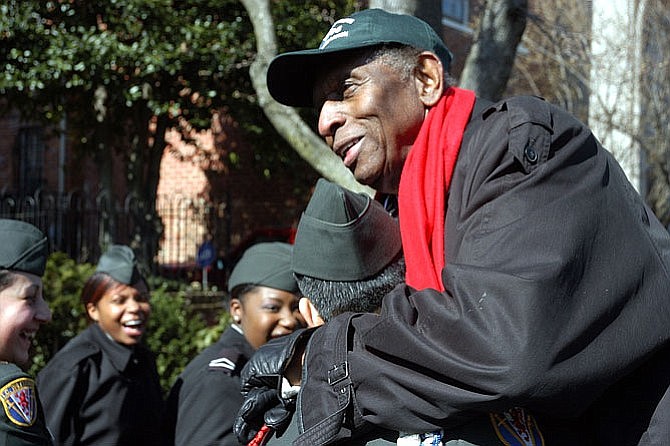 Earl Lloyd, serving as the 2006 George Washington Birthday Parade grand marshal, talks with members of the T.C. Williams JROTC program before the start of the parade. Photo by Louise Krafft. 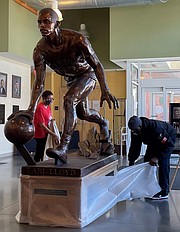 Karen Lloyd and Cornelius Lloyd, the niece and nephew of Earl Lloyd, unveil the statue of their uncle at the April 3 dedication at the Charles Houston Recreation Center. Earl Lloyd was the first African American to play in the NBA, breaking the color barrier in 1950. 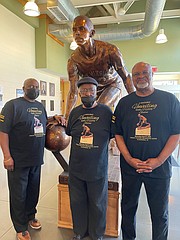 Playing for the Syracuse Nationals, Earl Lloyd (11), battles Fort Wayne’s Mel Hutchins (9) for a rebound during an NBA championship game on April 5, 1955. With the series victory, Lloyd and teammate Jim Tucker became the first African Americans to become NBA champions. 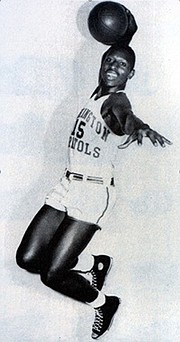 Earl Lloyd made history as the first African American to play in the NBA when he took to the court for the Washington Capitols on Oct. 31, 1950, in Rochester, N.Y.

Under the glare of a national spotlight, Jackie Robinson broke the color barrier for Major League Baseball in 1947. Three years later, on a snowy evening in 1950, a similar but quieter revolution took place when a black man stepped onto a court in Rochester, N.Y., marking the first time an African American played for an NBA team.

That man was Earl Lloyd, and on April 3, what would have been Lloyd’s 93rd birthday, a statue of the basketball trailblazer was unveiled at a virtual dedication ceremony at the Charles Houston Recreation Center.

“Earl Lloyd’s legacy goes much deeper than his success as a player on the court or coaching on the sidelines,” said Ted Leonsis, owner of the Washington Wizards and Washington Mystics professional basketball teams. “Earl’s perseverance paved the way for countless young African American men and women across the country to see for the first time that they, too, could play professionally. This statue will help ensure that all of his life lessons will never be forgotten and those who see it will be reminded of what they can accomplish.”

Lloyd’s NBA debut passed without fanfare. The Rochester Democrat and Chronicle didn't mention Lloyd, playing for the Washington Capitols, in its game story of the Caps’ 78-70 loss to the Rochester Royals. But it was a watershed moment in American history.

Just four years earlier, in 1946, the Alexandria native had graduated from the segregated Parker-Gray High School, now the site of the Charles Houston Rec Center, where athletic teams had to travel to cities such as Roanoke, Charlottesville or Petersburg in an open-bed canvas truck filled with hay because there were no hotels or eating establishments available to African Americans.

Nicknamed “Big Cat,” Lloyd would go on to become the first African American to play on an NBA championship team when his Syracuse Nationals defeated the Fort Wayne Pistons in 1955. In 1960, the Detroit Pistons took him on as the NBA's first black assistant coach and, later, he would be hired as the league's first African American bench coach. In 1971, he became the NBA's fourth black head coach.

Tony Dungy, the first African American head coach to win a Super Bowl, grew up in the Detroit area when Lloyd was named head coach of the Pistons.

“Earl was a pioneer and a trailblazer and had an impact on so many lives, including mine,” Dungy said. “When Earl became head coach of the Pistons, that was a landmark occasion that told me as a young athlete I could strive not only to be a player but someday to be a coach. And as I sat there in Super Bowl 41 as the first African American coach to win a Super Bowl, I thought back to Earl Lloyd and what he did to blaze the trail for us.”

In 1958, Lloyd moved to Detroit, where he played two seasons with the Pistons before retiring as a player and moving into coaching. In 2003, he was enshrined in the Basketball Hall of Fame. Lloyd was inducted into the Virginia Sports Hall of Fame in 1993 and the CIAA Hall of fame in 1998. In 2001, Alexandria celebrated Earl Lloyd Day and in 2007, the new basketball court at T.C. Williams High School was named in his honor.

Dr. Frank Enty was a teammate of Lloyd’s in college.

“This means more than just a statue,” Enty said. “It shows that someone coming from humble beginnings, from a segregated school in Alexandria, could rise and become a notable figure in the history of athletics. It means that any youngster who has the ambition, the determination, the stick-to-itiveness can also rise to great heights. That is what the statue really represents.”

The 8-foot statue of Lloyd, who died in 2015, was crafted by Brian Hanlon, the official sculptor for the NBA’s Naismith Memorial Basketball Hall of Fame. It is on display as part of the Alexandria African American Hall of Fame located at the Charles Houston Recreation Center.

Said NBA Commissioner Silver: “More than 70 years after his debut, Earl Lloyd’s impact is still being felt around the league.”