Police and Comradery Filled the Street on National Night Out
Votes

Police and Comradery Filled the Street on National Night Out 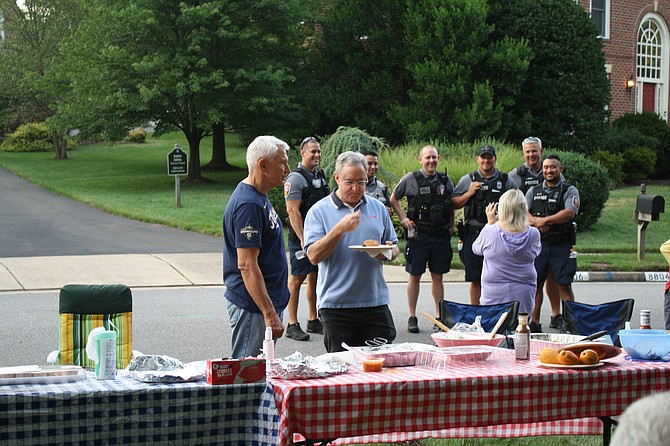 National Night Out in Mount Vernon Photo by Mike Salmon.

At 1 a.m. the night before, Mount Vernon resident Todd Cary threw three pork shoulders on his kamado grill that “looks like a big green egg,” Cary

said. The grill that has made him famous on his block where they gathered for National Night Out, and this year he had a secret ingredient too. “Something I read online said to add Dr. Pepper,” he said, and it seemed to do the trick as the whole block came out for this annual gathering, joined by Fairfax County Police officers from the Mount Vernon District.

“He’s been waiting a year for this,” said Todd’s wife Nancy Suska.

The barbecue feast at the Surrey at the Potomac neighborhood was one of several gatherings around the Mount Vernon area for this annual event that brings the police officers into the neighborhoods to share some good will on all sides. Police bring the patrol truck, police badge stickers and even let the children turn on the flashing lights.

Last year, this event was cancelled because of the pandemic. With the nice weather on Tuesday, it was outdoors and some folks wore masks.

Over in Mount Vernon Manor, Dasha Leary organized their event, and it was highlighted by two big dogs running around with the children and the parents.

“This is a street we just about shut down and break out the barbecues,” her husband said. 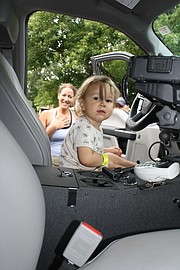 Looking at the party from behind the wheel of a police vehicle in Mount Vernon.

National Night Out began in 1984 when Matt Peskin, founder and executive director of National Association of Town Watch, introduced it in Philadelphia as a way to break down the boundaries between law enforcement and the community. Peskin started promoting the sense of community with a newsletter, and as he met with community leaders, the first gathering was born to replace the newsletter. The first annual National Night Out involved 2.5 million neighbors across 400 communities in 23 states.

This year, it was described this year as ”America's Night Out Against Crime,” it said on the FCPD website. It was designated as an annual neighborhood-based crime and drug prevention event and an opportunity to show neighborhood spirit and strengthen partnerships with local police.