Plus storm drains are portals for pet waste and excess fertilizer. 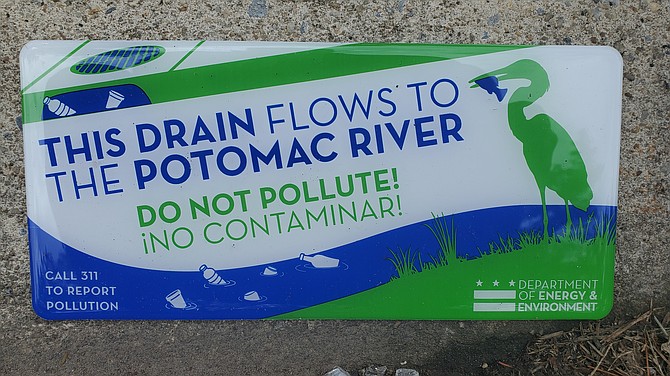 The key is to prevent trash and plastics from entering the waters of the Potomac River.

There’s a gorilla in the room for the Mount Vernon environmentalists, and this gorilla is the Potomac River. This river is a treasure to many in the watersports crowd, but it’s also a carrier of garbage from points north, and that’s where Dean Naujoks, the area’s Potomac Riverkeeper focuses his efforts.

Trash collects along the banks of the Potomac River.

poses a very serious problem and is a growing source of pollution for the Potomac River, the Bay and our Oceans,” said Naujoks. He cited a Scientific and Technical Advisory Committee report “the Chesapeake Bay watershed contains numerous urban and suburban areas that, via storm drains, are sources of plastic waste” to the Potomac River and bay ecosystems.

Over fertilizing and improperly disposed pet waste are on his radar too.

He works out of a DC office with Brent Walls, the Upper Potomac Riverkeeper and Mark Frondorf, the Shenandoah Riverkeeper. The mission of the three riverkeepers is to protect the public’s right to clean water in the Potomac and Shenandoah Rivers and their tributaries. They try to stop pollution to enhance the safety of drinking water, protect healthy river habitats, and enhance public use and enjoyment, their description says. They have an office on M Street in Washington, D.C. but spend much time in the field and on the water.

Potomac Riverkeeper Network, a nonprofit organization, operates entirely from membership dues, donations from individuals, corporate sponsorships, and grants from government agencies and NGOs. It also has, and encourages, a robust number of volunteers for the work of

Alexandria registration begins at 8:30 am at the foot of Madison St. in Oronoco Bay Park.

protecting and defending the watersheds of the Potomac and Shenandoah rivers.

Last April, Supervisor Dan Storck’s (D-Mount Vernon) did work with Clean Fairfax to organize a clean-up on Little Hunting Creek and there was a good turnout, said Christine Morin, Chief of Staff in Storck’s office. “We have a lot of environmental activists,” she said. Storck also sponsors an annual Environmental Expo that highlights pollution issues and many other things.

There are a few things residents of Mount Vernon can do to improve things in the river, and it begins with not letting things get in the storm drains,

Gloves, bags and grabbers/trash pickers will be provided.

“People need to avoid overfertilizing their yards, pick up pet waste and any litter they see because much of it ends up in the river and is literally causing low dissolved oxygen levels, algae blooms down river and threatening the entire Chesapeake Bay Restoration,” he said. Examples of single use plastics are plastic bags, straws, coffee stirrers, soda and water bottles and most food packaging.