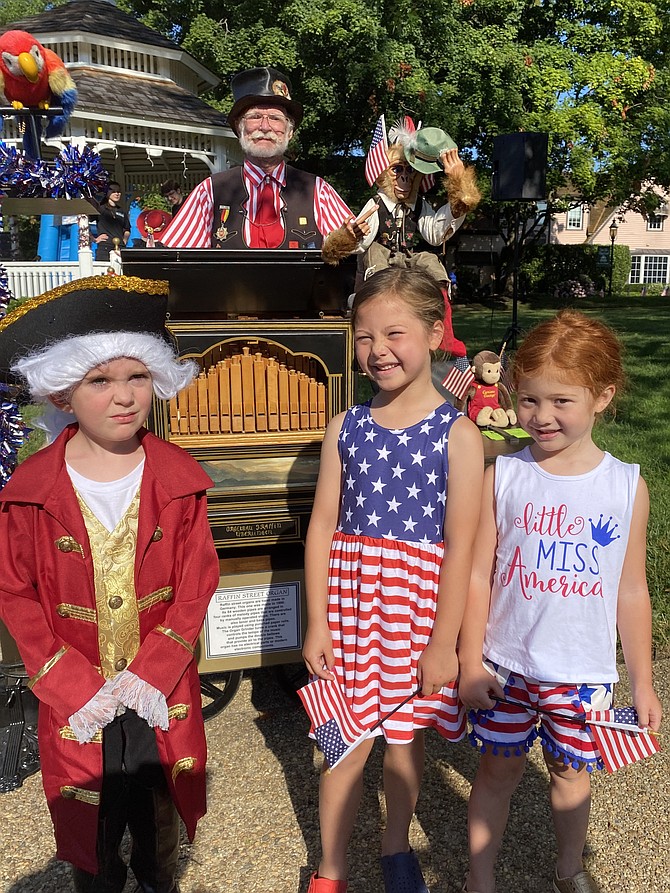 John Maloney, 5, of Great Falls, joins Ella DeTrani, 6, of McLean and her sister, Lia, 5, after listening to Terry Bender of Great Falls explain how the organ grinder plays music. Photo by Mercia Hobson. 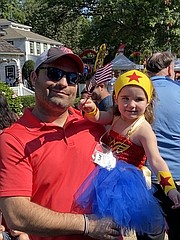 Emerson Smyers, 3, of Great Falls, is awarded “Most Entertaining 2021” at the Little Patriot Parade held on the Village Centre Green at the Gazebo. She is pictured with her father. 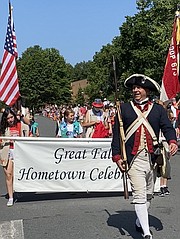 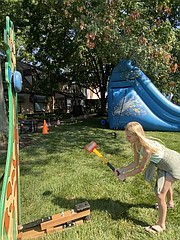 Storey Summers, 10, of Great Falls, tries her strength at a high striker, ringing the bell every time. 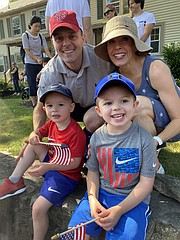 The Spagna family of McLean, James, 3, Brayden, 5, Chris, and Kasey are decked out in red, white, and blue for their first 4th of July Parade in Great Falls. Having finished the games on the common, Chris said they are excited to see the trucks, dogs, horses, and fire engines. “If we’re good,” he said, looking at his sons, “we’ll get some ice cream at the Creamery.”

Great Falls traditions returned to the Village Centre Green for the 4th of July 2021. Presented by Celebrate Great Falls, the welcoming atmosphere and organization drew families from the community and surrounding areas to the shaded, grassy common.

Before the younger children paraded around the perimeter of the interior common, dressed in their finest patriotic displays in the Little Patriot Parade, the older children, like Michael Picard, 7, and his sister Caitlyn, 10, provided service hours.

“I’m helping in the pizza booth,” said Caitlyn. For Michael, volunteering took on a special meaning. “I’m looking forward to a snow cone,” Michael said, eyeing the machine. “I don’t remember having one before.”

Organ grinder Terry Bender of Great Falls and his wife Jan brought a festive historical aspect to the event. He situated himself along the interior pathway with his newest street organ, handmade for him in 2018. As children and parents walked by, they gathered for a short time around Terry. He showed how the organ played music using punched paper rolls with tunes arranged especially for this type of street organ.

Charlotte Klesh, 3, of Vienna wandered with her dad around the common. “We came a few years ago. We love the old town, Americana feel,” he said.

Story Summers, 10, of Great Falls, said while she loved the fireworks best, those would be later in the evening at Turner Farm, “I’m glad we don’t have to be stuck inside like last year, and we don’t have to wear any masks.”

Shortly after 9:15 that morning, the Patriot Parade began, followed by the Main Parade at 10 and food and festivities until 12:30 p.m.

Best Decorated Wagon – Harlow Grindler, 3, and Every, 6, of Great Falls