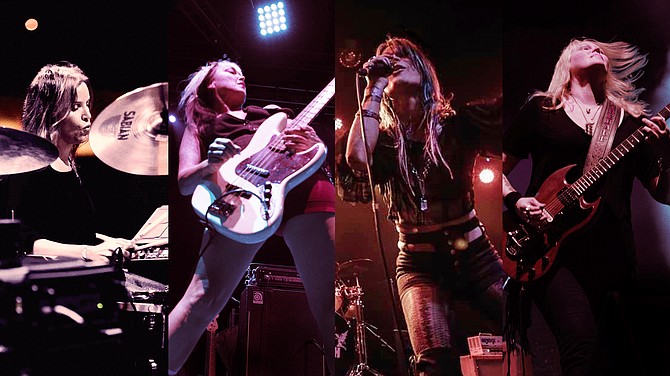 The faces of Black Sabbitch.

The black leather, boots and heavy metal personas dominate the stage when the women of Black Sabbitch start cranking up the Black Sabbath 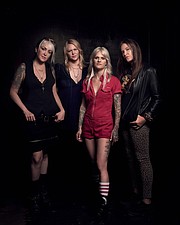 tunes. It’s all about the music for these women rockers who are playing at the Birchmere in late July.

“We use our musicianship to get inside this music, capture the spirit and energy Black Sabbath did in the early seventies,” said band founder Angie Scarpa who plays the drums along with Melanie Makaiwi on bass, Emily Burton on guitar and Alice Austin on vocals. “I don’t think there’s another band of all-women doing it,” she added.

They are redefining the concept of cover band, but fall short of being called a tribute band, and are not decked out in wigs and costumes. “The way we look on stage is the way we look walking down the block,” Scarpa said.

Black Sabbath was a British rock band formed in Birmingham in 1968 by guitarist Tony Iommi, drummer Bill Ward, bassist Geezer Butler and vocalist Ozzy Osbourne. With the religious connotations surrounding their name and the satanic rumors that arose from the leader Osbourne, it's a label that just sort of stuck. Supposedly Osbourne bit the head off a real bat during one show, so this added to the craziness.

Scarpa knows about the rumors, and calls it a misconception. Sabbath was really more part of the hippy scene she said. “The vast majority is not like that,” she said.

After their show at the Birchmere, the band is headed to Annapolis, then Pennsylvania and New York before going back to the west coast. In October, they go overseas to eight shows in the United Kingdom. Black Sabbitch was hand-picked by Sharon and Ozzy Osbourne to open the inaugural Ozzfiesta.

After Europe, they are playing in the "Psycho Las Vegas," festival with The Flaming Lips, Danzig, Ty Segal, and Mercyful Fate.

When talking about the upcoming schedule, Scarpa said it was tough to look ahead with the pandemic impacting everything. “It’s a difficult time to be planning things,” Scarpa said, but also noted that they are one of the live shows out there as the pandemic is fading.

No one seems to be offended by the name but every once in a while, a social media platform will say it’s profanity and a web service will kick them off, but this is just a computer program. The name is part of their vibe. Scarpa said they do see their tee shirt sales remain consistent, and Scarpa is not surprised. “They just like what it says,” she said.