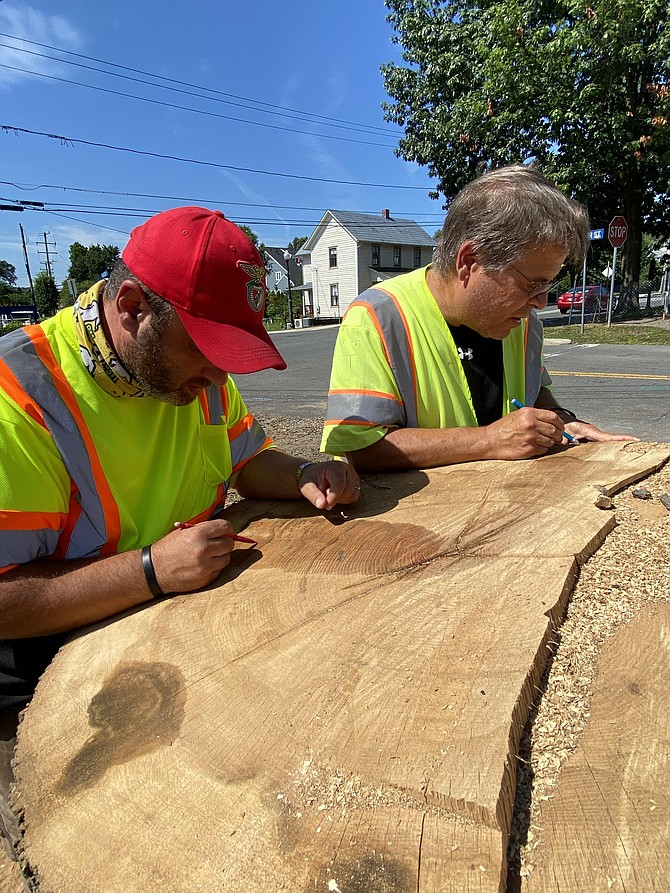 Professional arborists use a bucket truck to fell the nearly 200-year-old Overcup Oak tree. It is probably the oldest witness tree of its kind, telling the town's development from a handful of people in 1823 to a town poised for the Silver Line of the Washington Metro system. 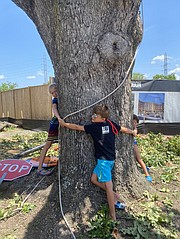 Felling is generally reserved for trees that cannot recover. During a pause in the process, the arborists allowed three children, (from left) Ashton Kooy, 9, with siblings Grant, 7, and Eve, 4, to hug the witness tree and give perspective to its girth, measured by the town forester at 10 feet 3 inches.

In 1823, an acorn from an Overcup Oak tree sent up a shoot at what is now the corner of Elden and Center Streets in the Town of Herndon. In Washington, D.C., James Monroe, the 5th President of the United States, declared the "Monroe Doctrine," opposing European colonialism in the Americas. Overseas, classical composer Ludwig van Beethoven turned 52 years old. The sapling grew. More than likely, the handful of residents living in the area did not take notice.

On Monday, July 12, 2021, a professional crew felled the oak tree well-known for its harvest gold color in the fall for part of the $1,830,000 Elden-Center Streets Intersection Improvements project. This project supports the reconstruction and signalization of the Elden Street/Center Street intersection and other improvements. The estimated completion date is 2023. Some residents in the town took notice and voiced immediate outcry to local officials.

THE OVERCUP OAK TREE had stood as a witness to the town's history, from an unnamed village to its rise with a steam sawmill in the 1850s and the coming of the railroad and depot. The tree lived as cars replaced horses plodding on Elden Street and when a sign for the future redevelopment of the downtown was installed feet from its branches in 2020.

"I know there was a lot of surprise to see the tree…be taken down as part of this larger improvement project," said Town Manager Bill Ashton at the scheduled Town Council Meeting the day after the tree was removed. "It is sad to lose a tree that has been there for that long period."

According to Ashton, early in 2015, the Town Council was presented with roadway design options to correct sight distance issues at the four-legged intersection. Following a public meeting and public hearing in October of 2015, Council adopted the design option. It would remove the obstructing tree in the approach sight triangle quadrant. Additional designs included signalization and other improvements to enhance vehicular, pedestrian, and bicycling safety.

According to arborday.org, the Overcup Oak tree is a native found in the swampland of the Atlantic coast. It is so named for its acorn cap that covers almost the entire fruit. Being a bottomland species, the Overcup Oak sapling did well near the spring that ran through the area, and it tolerated flooding and soil conditions.

The day after the tree fell, its stump and two trunk slices remained. John Dudzinsky, the town's Community Forester, stood on-site with Elden-Center Street Project Manager Victor Lopes. Looking at a cross-section of the tree trunk, Dudzinsky said that the oak had been declining in health. "It was just struggling," he said.

"You can see signs of disease inside the trunk; there's the discoloration," said Dudzinsky. Asked if the tree had posed a safety hazard, he said no. "There weren't any major branches that had come down. It was just starting to die back, and there were dead limbs in it." Dudzinsky said he had measured the tree's girth at 10 feet 3 inches.

Dudzinsky and Lopes prepared to date the tree by studying the annual growth increments of tree rings on the stump. Each year a tree adds to its growth a new tree ring. The oldest rings, the sapling rings, were very narrow and near the center of the trunk, according to Dudzinsky. They would be challenging to count being so close and tightly packed. He added that arborists generally count those as a total of ten.

THE YEARLY RINGS radiating outward proved somewhat easier to spot. Tree growth leading from spring to summer showed as the wide part with its distinct light color. As the summer progressed and it got drier, an adjacent darker band ring occurred as the tree's growth slowed. The combined two-colored set of each ring reconstructed peculiarities in the tree's annual life and the local climate history. The rings interpreted insect and bacteria attacks, droughts, and floods and could accurately determine the tree's health and age.

Dudzinsky and Lopes spayed water on the tree trunk to darken the wood and make counting the rings easier. Using the lead tip of mechanical pencils as place counters, they inched them slowly outward, lips moving in the silent count. Minutes passed, a brief discussion, and Dudzinsky announced, "One hundred and ninety-eight years old [1823-2021]. Dudzinsky said that the tree was probably the oldest and largest Overcup Oak in the town.

According to Dudzinsky, the two trunk sections left on the ground were going to the town shop on Sterling Road. While it was not in his purview to decide what to do with them, Dudzinsky said staff could consider making a couple of tables out of the cuts, or wafers as they are called.

Lopes said it took about five hours to take down the tree due to challenges with the electric wires and traffic. "The job was a little tricky. That's the reason we had a bucket truck... We had to stop traffic for it [the aerial platform] to go under the wires and go around. You have to be very careful so as not to hit the wires with either the chainsaw or falling limbs."

Lopes said that homeowners should not attempt to take down trees this size. "It's very, very dangerous," he said. Several things could go wrong, from electrocution to the tree or a branch falling on someone or property. "For all the right reasons, you should always seek a professional to take a tree this big down."