Three decades of stories to tell 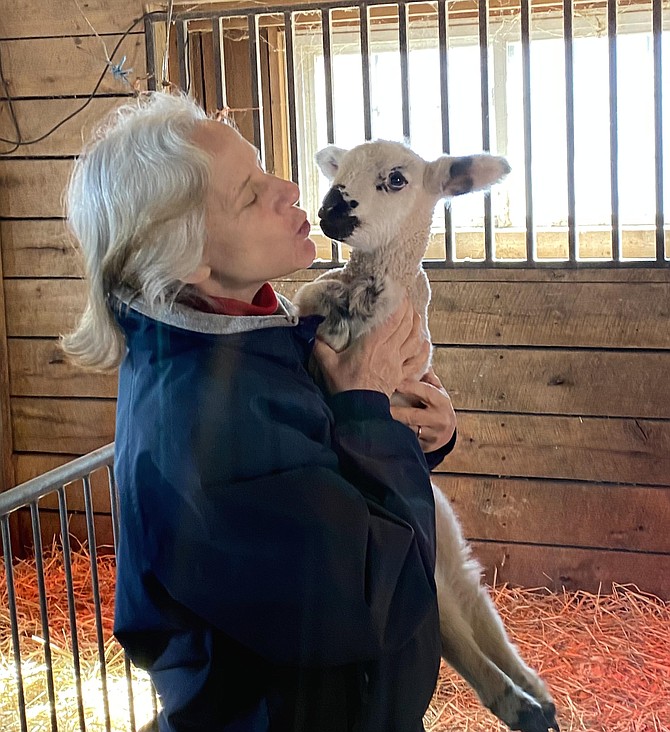 For Yvonne Johnson, former Manager of Frying Pan Farm Park, retirement means she has all the time in the world to volunteer at the park and play with the animals. Photo by Mercia Hobson.

On Tuesday, March 2, and after more than 31 years of public service, Yvonne Johnson, Manager of Frying Pan Farm Park, had only a few hours left to tie up loose ends before retiring, and something was bothering her. “I’m concerned about what I forget to do or get done, or hand off, that kind of stuff.” Asked what the worst that could happen was, Johnson said, “A customer is disappointed with the service the park is delivering.”

During Johnson’s tenure, many changes occurred at Frying Pan Farm, causing it to label “a premier park.” Located in Herndon, amenities include a1930s working farm, wedding/rental venue, equestrian facility, pre-school, and natural and cultural resources.“We are preserving an agricultural process…the actual work of running a farm. That is why people love to come here,” Johnson said. The 135-acre site attracts more than 700,000 visits annually.

JOHNSON served as part of a dynamic trifecta-team. Fairfax County Government and Fairfax Park Authority partnered under a Memorandum of Understanding, and Friends of Frying Pan Farm Park owned the animals. “All the land that the Park Authority owns has their protection,” she said. According to Johnson, Fairfax County provided significant financial support, covering almost all staff costs. However, it was unrealistic for a working farm to go through the multi-month formal Fairfax County procurement processes, so the Friends take care of that. ”We can’t wait three months … if we need a new cow,” she said.

As part of Johnson’s position, she worked behind the scenes assigning projects and staff schedules. She developed and maintained community and cooperative partnerships and served as a contact for donations and fundraising activities while optimizing revenue production and customer satisfaction. Johnson described herself as a duck sitting on the top of the pond, peaceful and quiet. “What you don’t realize is underneath there is paddling like crazy,” she said.

Johnson’s idea of wagon rides proved to be her “best give,” a viable revenue source for the park. “If we don’t earn revenue, we can’t deliver our mission…to preserve and interpret... And by doing things like wagon rides and then later the carousel …(Those things ) give us the ability to keep the farm open for free.”

The wagon rides also provided a means to showcase the park’s nature, history, agriculture, and farming stories. Before then, people would come and only walk around Kidwell Farm located within the park. They’d meet the chickens, rabbits, goats, and sheep; see the farmhouse, outbuildings, barns, and machine shed and think that was it. But with the wagon rides, park volunteers and staff could tell the bigger story of farming of the 1930s. People could ride out a quarter of a mile and see the cattle grazing in the pastures and the 15-acre crop fields and the woods where nature abounds.

As a bonus, the wagon rides delivered different experiences to different ages simultaneously. The rides entertain the children, and the moms get to talk and be grownups. “Everybody’s happy getting what they need,” said Johnson.

Asked about her saddest day at the park, Johnson did not hesitate. It was 9-11—no cars in the lot, and everything dead silent. “The only thing I saw was a fighter plane going across the sky,” The next day, when Johnson returned, she said there were so many people, but it was so quiet, everyone speaking in soft voices. Johnson took out a chicken, held it, and let people pet it. ”I think they wanted a place to come, to know it would be okay. For 9-11, (we) supplied that…Now we’re doing that again during COVID. We’re the place you come to, to know it will be okay.”

LOOKING BACK on her 31 years at the park, Johnson said she was blessed to serve as the manager and have the opportunity for the County to buy the 4.5 acres to add to the park and open a visitors center with spaces for indoor gatherings and a museum exhibit. She felt fortunate to work with the group that did the Floris Historic District that encompasses Frying Pan.

Johnson is also pleased the park remains a place where families build memories. She told the story of her favorite moment captured only in her mind when the carousel was riding. Johnson said it was like watching little vignettes of families. An elderly gentleman and young girl, both with very dark skin, sat on the bench looking at each other being very happy. A mom and dad with their children on separate horses chit-chatted, having fun. Another mom held her tiny baby going up and down on a carousel horse.

“Just watching that, the snippets of those people going by over and over again, how much they were enjoying it and that memory they were building,” Johnson said.