Exploring the Connections Between Human Beings at Westfield High
Votes

Exploring the Connections Between Human Beings at Westfield High 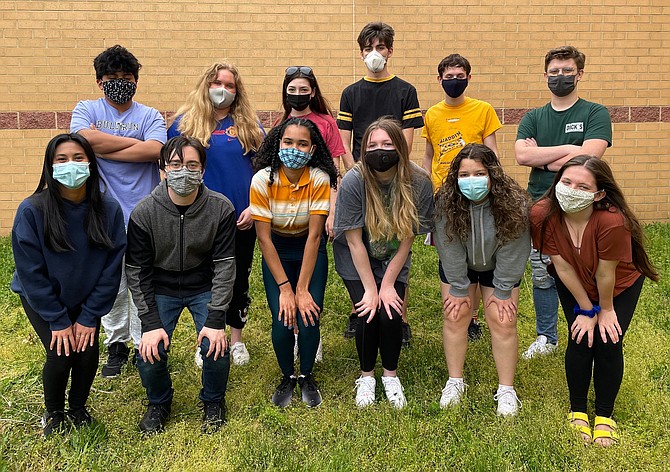 Examining how people are linked through life’s shared experiences, Westfield High presents the musical, “The Theory of Relativity.” It’ll be performed outdoors at the school, and also livestreamed, Friday-Saturday, May 21-22, at 8 p.m.

Tickets are $15 in person, and $10 livestreamed. Both are available at https://www.westfieldtheatre.com/. The cast and crew of 32 had to adapt to performing outside, with masks, but were delighted to be acting together again.

“They’re working hard and are excited to be able to react to an actual person, instead of a camera,” said Director Enza Giannone-Hosig. “We have a wonderful music director, Matt Arnett, and the students learned their music and choreography quickly. They’re so talented and willing to step outside their comfort zones.”

She said audiences will enjoy this show about “how individuals can connect in this fast-paced world. And after months of being away from people, they can experience live theater. We’ve produced shows, all year, and proved nothing can stop us from doing what we love most.”

THIS SHOW has some dialogue, but is mainly songs, plus choreography by senior Ashley Andre. It follows different characters and their perspectives on life, with the ensemble bringing their stories and relationships all together. The actors portray college students on campus.

Senior Alison Brown plays Mira, a nursing major. “She’s hardworking and feels pressured to do well,” said Brown. “But she’s friendly and happy and doesn’t let anything bring her down. It’s fun playing a complex person exploring why she’s so positive in her outlook on life, despite the rough patches she’s been through.”

“Her mom made her promise to remain positive and remember that her life’s a miracle – and no matter what happens – she should stay hopeful and hardworking,” explained Brown. “Her mom said she shouldn’t waste a single day because, before she knows it, they’ll all fade away. Mira’s song, ‘Promise Me This,’ goes through her whole life. And although it’s sad, it ends on an uplifting note, telling people every day’s a blessing, so make the most of it.”

Brown said audiences will learn the importance of “having empathy for everyone in every situation. And the show’s deeper meanings can lead people to re-examine their own lives.”

Portraying student Catherine is junior Chloe Jornales. “She’s OCD and likes everything in order,” said Jornales. “She’s an organizer and a perfectionist with high expectations of herself and others. When her boyfriend bakes her a cake, she’s concerned he’s moving too fast, because she likes being in control. Her immigrant family wants her to graduate college and have a high-paying career, and she wonders what’ll happen if she doesn’t exceed or meet their expectations – or, worse, fail altogether.”

Jornales connects with Caherine’s high expectations. “I first thought she was over the top; but playing her led me to be more chill and accept that my best is good enough,” she said. “I learned making mistakes isn’t failing; they actually put you on the path to success.”

Singing “Great Expectations,” Jornales explains that Catherine’s parents had different plans for her than she did. So, she said, “I tell both her story and mine, so anyone in the audience feeling that way – following a path they can’t reach – will know they’re not alone.”

“This show relates to everyone, in a way – whether it’s expectations, relationships or personal problems,” she continued. “It’s upbeat, and audiences will also like its contemporary music and uplifting message.”

Sophomore Kayla Gadley plays Amy, an art major. “She’s stressed about dating a new person and tells how different relationships throughout her life have affected her,” said Gadley. “Amy’s sweet and cares about others. She’s kind of lost, but she’s trying to figure out how to move forward with her dating life and take a risk – even though some past dates haven’t worked out.”

Enjoying her role, Gadley said, “It’s been work, getting back into the groove of memorizing lines and interacting with other cast members. We’d been in class online, but this was our first time with each other in person.”

HER FAVORITE SONG is “Relativity,” a large, group number at the show’s start. “We’re all singing together,” said Gadley. “And it’s powerful because it sets the stage for the story to unfold.” As for the play, she said, “Seeing us all together is a dynamic that people have missed. And they’ll be able to see themselves in this story about love, connections and perseverance.”

Portraying Julie, a recently engaged college student, is junior Elli Vlattas. “She has a bunch of cats and doesn’t know her fiancé’s allergic,” said Vlattas. “She thinks he’s just super sensitive. Julie’s peppy, always looks on the bright side and puts others, and her cats, before herself. She’s also a little shy and doesn’t interact with many people.”

Vlattas loves playing her because “She’s funny and similar to me, and I like having lots of energy onstage. In the number, ‘Julie’s Song,’ I hint at the song’s real subject, but don’t reveal it until the end. The piano follows my voice, and I can control the tempo – which is freeing. The show’s well-rounded, with different subjects ranging from sad to funny. And audiences will feel like the actors are real college students.”

Junior Anna Moritz plays biology major Sara. “She’s figuring out her friendships and what she wants to do with her life,” explained Moritz. “She’s nerdy, is fascinated with horses and has a great sense of humor, but others can bring out her sarcasm. It’s cool having a role with lots of comedic elements and learning comedic timing. And it’s nice working with Micaela [Luster] who plays Sara’s friend Jenny.”

Their duet, “The End of the Line,” chronicles their entire friendship. “In it, Sara transforms from nerd to popular girl, so it’s interesting portraying that dynamic with Micaela, who also changes completely,” said Moritz. “Overall, audiences will enjoy the connectivity between all the characters. And at the end, they’ll see how the monologues and songs are related, too. And that’s the point – that humans are connected with each other, even if they don’t realize it.”