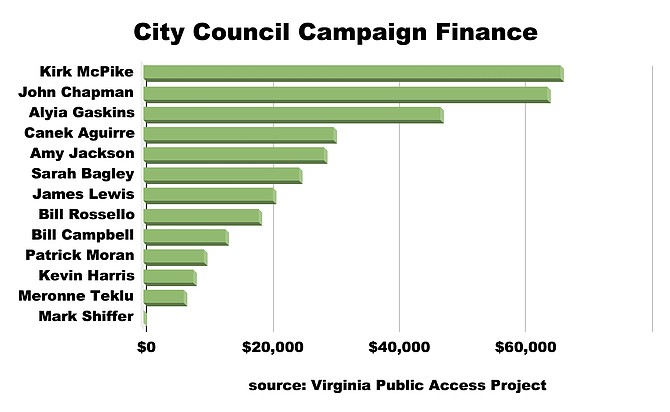 Former Mayor Bill Euille says one of the first things he did in his first campaign for City Council in 1994 was grab a copy of the student directory from Quinnipiac University, where he graduated in 1972. He started reaching out to old friends, relatives, classmates, professors, doctors, dentists — anyone and everyone he could think of who might be willing to write a check to help him get elected. In the popular imagination, the people who finance City Council campaigns might be fat-cat developers or people with interest at City Hall — and certainly there have been examples of that. But a review of campaign finance records from the Democratic primary shows most of the high-dollar donors are people with personal relationships to the candidates.

"I always tell folks to call on your family members and personal friends first," said Euille. "Other donors are going to look at your list, and if they see it's broad-based they'll donate to you. But if they see it's limited they're going to be skeptical about your chances of winning."

"I know this sounds like hearts and flowers, but most of the people who give to these campaigns are truly people who care about the city."

Running a campaign for the Alexandria City Council isn't cheap. Euille says he often advises potential candidates they'll need to raise $20,000 to $30,000 just to get through the primary and then twice that for the general election. Raising that kind of money takes personal and professional connections, a Rolodex full of names and a stack of business cards. Sometimes candidates finance their own campaigns. Other times they have wealthy relatives. Most of the time they depend on a network of people who are friends and associates.

"I know this sounds like hearts and flowers, but most of the people who give to these campaigns are truly people who care about the city," said Susan Kellom, former chairwoman of the Alexandria Democratic Committee. "It's not that they're looking for something to advance themselves personally, most of the time these are personal friends who really want the person to get elected."

The candidate who raised the most money is Kirk McPike, who has more than a decade of fundraising experience working on campaigns across the country. He's perhaps best known in Alexandria for running the successful primary campaign of Sen. Adam Ebbin (D-30) in 2011, a fiercely competitive race against then-Councilman Rob Krupicka and then-Arlington School Board Chairwoman Libby Garvey. McPike has also run campaigns for Congress in California and sheriff in Texas, so he had a professional advantage over first-time candidates who were learning about this for the first time.

"Political fundraising is a large part of my career and has been ever since I graduated from college," said McPike. "A lot of my friends and my professional contacts are people who understand the importance of early contributions to political campaigns, which was certainly an advantage when I was telling my friends and former colleagues that I was running."

$1,000 from Anne Bigay Ridenhour of Alexandria

$680 from Searles Bagley of Chesapeake

$500 from Sherry Fardie of Wolcott, Colo.

$1,000 from Anne Bigay Ridenhour of Alexandria

$500 from Zena Ayalew, Department of Health and Human Services

$500 from Alexander Teklu of Springfield