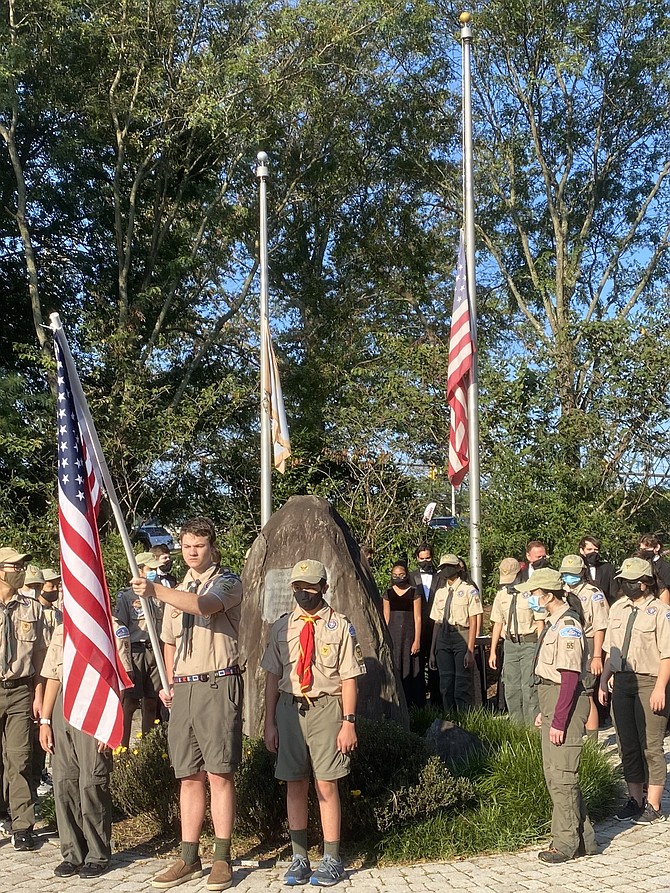 Scout Troop 55, supported by its chartering organization St. Francis Episcopal Church in Great Falls, presents the colors during the program, and leads the Pledge of Allegiance.

On the benchmark day of the 20th anniversary of remembering 9/11, the people of Great Falls gather. They hear what has become a heartbreaking 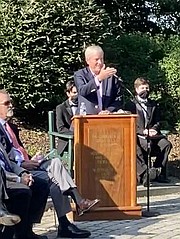 tradition, sounds of twenty years ago. An audio clip of several different recordings plays over the loudspeakers. "To bring back the memory," says Andy Wilson, president of the Friends of the Great Falls Freedom Memorial.

The voices of multiple traffic controllers are heard. Mostly staying clear and calm, they transmit the final calls to assist aircraft in crisis. Sliced into the mix are the sounds of jet engines developing thrust. Cries in the cabins, words of fear, and words of hope play. "You are not going to die." Messages left on answering machines by passengers and crew, private comments to family members say, "I love you." The word hope is heard.

“United we stand, divided we fall.”

Pastor Dave Zucuchelli (Ret.), Smith Chapel United Methodist Church in Great Falls, gives the Invocation. Like so many other invocations heard at the Great Falls Freedom Memorial, it carries the same message but in other eloquent words. "Those who have died…will be those whose memories keep us moving forward. We pray for strength, and above all, we pray for love."

WOOD’S DAUGHTER called him at the Pentagon, concerned about his safety after learning planes struck the North and South Towers of the World Trade Center in New York City. He says, "With a father's patience and reassurance, I calmed her with mock bravado. ‘Keep your head down,’ I said. As I hung up the phone, American flight 77 crushed my office." Black smoke filled his office and lungs; bright orange flames lapped at the windows, and his office door was jammed shut. With help, he gets out, and teamwork and training kicks in.

They rush out through old bus tunnels under the Pentagon to escape a possible second strike from a reported inbound airplane that was United flight 93.

"Little did we know, America's longest war had begun," he says.

Wood tells of a draft document, a strategic plan for the army called the Department of Defense Quadrennial Defense Review. "It's a report to Congress that compares the defense strategy with resourcing needs, a scorecard, and a game plan for defending our nation,” he says. 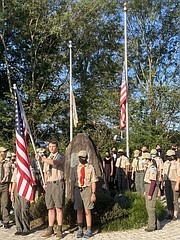 Scout Troop 55, supported by its chartering organization St. Francis Episcopal Church in Great Falls, presents the colors during the program, and leads the Pledge of Allegiance.

"My two staff members who died in 9/11, it was their professional work, and the analysis I was reviewing was to be published 30 September, just several weeks after that. And in that draft document, it contained virtually nothing about the threat of terrorism to the homeland. A hasty fix was ordered," Wood says. "Peace demands strength, but it also demands unity," Wood says. "It's apparent our forefathers had it right. United we stand, divided we fall."