Anyone for Bike Riding?
Votes

Anyone for Bike Riding? 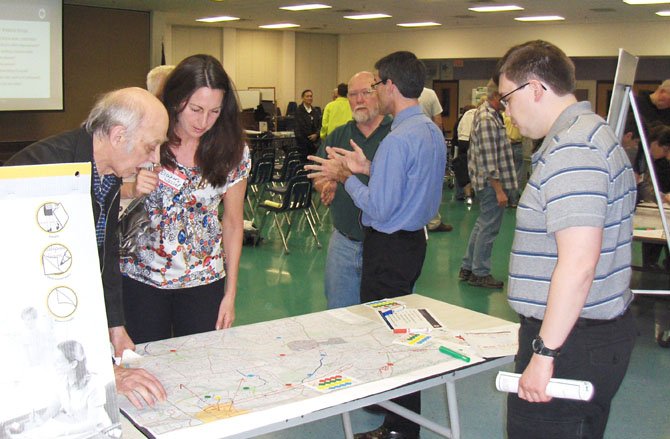 Residents discuss potential bike paths while looking at a map of the local area. Photo by Bonnie Hobbs. 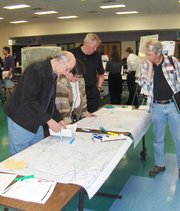 The goal is to create a system of on- and off-road bike lanes to serve as a bicycle-transportation network. Included will be specific improvements needed to accommodate and encourage bicycling within and between county activity and population centers, and to and from neighboring jurisdictions.

"About five years ago, the county decided to create a bike program," said Charlie Strunk, bicycle coordinator for the county DOT. "The first step was making a map of the existing bike trails, and now we need a plan. We started with Tysons first because it was moving a warp speed, and now we’re doing the rest of the county."

He and Dan Goodman spoke to local residents last Thursday night, March 29, at Daniels Run Elementary. Goodman is a senior planner with Toole Design Group of Silver Spring, Md. His company and Cambridge Systematics of Bethesda are working together with the county to develop its bicycle master plan. 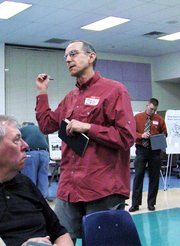 Bruce Wright with FABB talks about the need to fund implementation of the bike plan.

Toward that end, they’ve held several meetings in various parts of the county to garner input from residents in each area. Also instrumental in developing the plan will be members of the county’s Bicycle Advisory Committee, plus the group Fairfax Advocates for Better Bicycling (FABB).

"We started working on this last June and we’re almost done," said Goodman. "We broke the county into eight quadrants since it’s such a large, geographical area."

The Daniels Run meeting dealt with the Central Fairfax area. "This is our eighth of eight community-outreach meetings," said Strunk. "The City of Fairfax isn’t a part of it, but it’s integral to it."

Goodman said they’ll then have two, countywide meetings summarizing the eight meetings, plus all their fieldwork. Next, they’ll make specific recommendations to the county Planning Commission and Board of Supervisors. The finished product may then be incorporated into the county’s Comprehensive Plan and into the City of Fairfax’s plan.

"We’re trying to create a linear bike network to make biking a feasible, transportation option in Fairfax County," he said. "We want to have biking be part of the culture of this county. We’ve already had meetings with the Bicycle Advisory Committee and, in April and May, we’ll meet with representatives from law enforcement, public health and schools for their input."

VDOT has a statewide bike policy and, said Goodman, "We’re trying to implement it on a local level." He said it will contain information about items such as safe bicycle routes to schools and developer contributions. That’s why the county is seeking comments from a wide variety of individuals and entities.

"We want to build broad support for the plan and enlarge and diversify the community of bicyclists," he said. "We also want to hear from you tonight and will then spend the next few weeks examining your suggestions."

Over the last six months or so, said Goodman, Toole employees have reviewed the major and minor roadways. "We’re measuring road widths to see where we can get bike lanes within roads as they’re routinely resurfaced, rather than widening them – which is more expensive," he said. "We’re also looking at dangerous ramps and intersections."

Ways of marking bike paths include:

*Placing shared-lane emblems on the road showing that bikes and cars share a lane when there’s not enough room for a separate bike lane; and

*Having a cycle track – a bicycling space physically separated from both the roadway and the sidewalk by a buffer. Sometimes, even parked cars can be used to separate bicyclists from vehicles passing by.

According to 2010 U.S. census statistics, nearly 13,000 daily trips to work made by Central Fairfax residents are 3 miles or less. The number of daily trips of 3 miles or less for just schools, shopping and other reasons was a whopping 110,124. So, said Goodman, "If we could take some of them off the roads, they could have an impact on traffic congestion."

It’s understandable therefore why FABB wants more bike lanes and neighborhood connections established here. It would like residents to have better opportunities to bike to their jobs and other destinations in their everyday lives. It also wants children to be able to bicycle safety to school and other activities.

The census further revealed that, for workers living in this county: 72.1 percent drove alone to work; 10.2 percent carpooled; 8.8 percent took public transportation to their jobs; 2.3 percent walked to work and .3 percent bicycled to work. Another 5 percent worked from home and the rest traveled via other means, such as motorcycle or taxi.

But to make the area more bike-friendly, said Goodman, "We need to deal with the barriers of I-66, Routes 50 and 29, the Beltway and Braddock Road. So we’re looking at the long-term visions for these roads so we can find a way to get across and/or around them."

At the meeting, several maps were displayed showing possible bike routes within the Central Fairfax area and from there to destinations elsewhere. Residents used them to help decide what physical improvements are necessary to make viable bike trails here.

"GMU did a good job mapping out routes between the university and Metro," said Goodman. "We also want to reflect Fairfax City’s trails on our countywide bike map. And we want a mechanism to facilitate better coordination between GMU, NOVA, Tysons, the City of Fairfax, Vienna, Oakton, Mantua, Burke, Braddock, Kings Park and Merrifield and also to other parts of the county."

So, he told the meeting attendees to check out the bike routes and maps GMU is developing – including its signage recommendations – so they’d see what’s possible. "We’ll put the comments into our GIS and will look at all of them," he said. "Tell us where the bike-route gaps are, which intersections need bike-safety improvements and what streets should have bicycle lanes, cycle tracks, etc."

Goodman urged residents to also tell them where the important, existing connector trails are and where more are needed; which destinations should be served; what major barriers should be addressed; what good bike routes are currently working; and what should be done to improve routes to other parts of the county.

Once all the information is gathered and incorporated into the bike plan, he said, "We’ll update the county’s bike maps – not just to show where the infrastructure is – but to actually tell people where to ride."