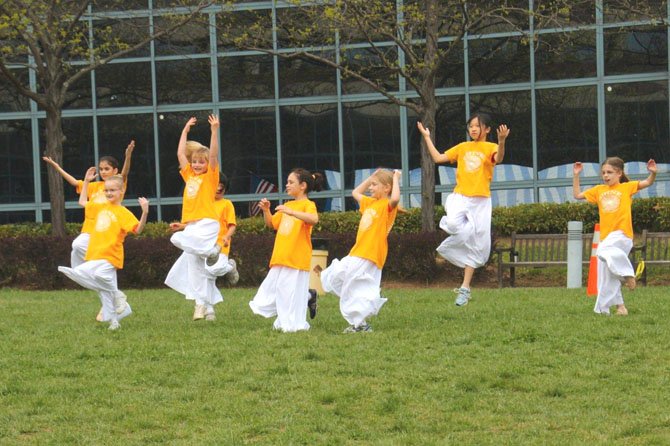 Bringing in some light: The Fairfax-based Children of the Light dance ensemble performed to the song Highly Exalted at the Jubilee Christian Center-sponsored 2012 "Eggstravaganza" on Saturday, March 31, at the Fairfax County Government Center. Formed in 1991, the Christian dance and drama group of children and youth ages 3-18, under the guidance of Director Jeannine Lacquement, are trained in creative dance, mime and choreography. Photo by Victoria Ross. 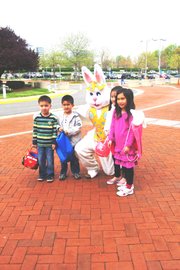 Ever since Dolly Madison, wife of the fourth American president, organized an egg roll down the hilly lawn of the Capitol building in 1810, egg rolls have become an Easter tradition.

On Saturday, March 31, more than 1,000 children had the chance to roll wooden eggs down 40 lanes during Jubilee Christian Center’s annual Eggstravaganza, held at the Fairfax County Government Center. Older children could compete during the egg-rolling contest, while children younger than 5-years-old had their own lanes, where they could roll at their leisure. Each child who participated received a ticket for a goody bag filled with candy.

"There is something for everyone here," said Terry Leonard of JCC, the event’s organizer, "we have water bottles, chips, Vocelli’s pizza and goody bags for 2,000 people. There’s finger-painting, face-painting, dance performances, you name it. We even have several Easter Bunnies to meet and greet all the children." 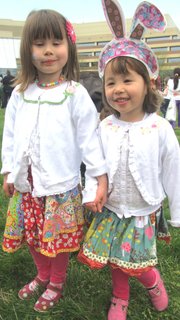 Wearing their Easter Best: Katie Sherry, 3, holds hands with big sister Lilly Sherry, 5, as they wait to get tattoos during Jubilee Christian Center’s 2012 "Eggstravaganza" held at the Fairfax County Government Center on Saturday, March 31. Their mom, Tracy Sherry, of Fairfax Station, said the girls loved dressing up for the event.

Sebrena Greene, who brought her family from Reston, said she was surprised by all the activities. "This is pretty cool. It’s a nice family event, and a beautiful day to be outside."

Jubilee Christian Center places a strong emphasis on the arts and adds creativity to its worship services, which feature contemporary Christian music, according to Leonard. For more information on JCC, go to www.jccag.org.