But Warhawks bounce back with Liberty win over Fairfax. 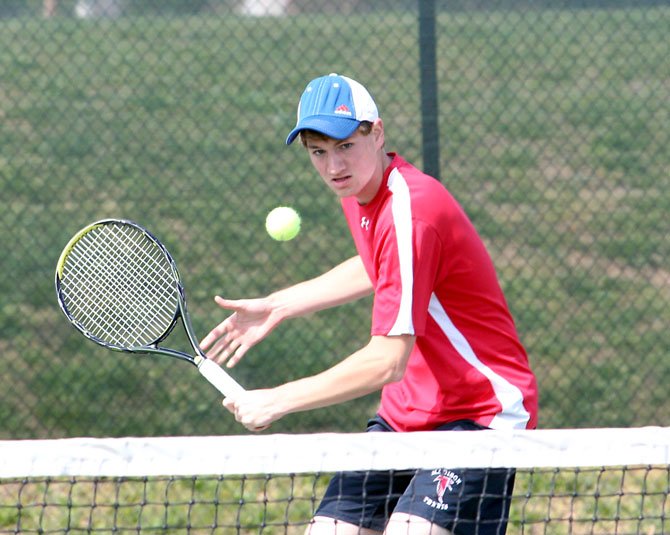 This past Friday, Madison High boys’ tennis player Alec Ostapovicz, shown here during an earlier season match this spring, won his No. 3 singles outing over a Fairfax High opponent and was also part of a victory at No. 2 doubles play, where he teamed with John Nothaft.

Vienna — On Wednesday April 11, at Madison High School, the undefeated McLean High boys’ tennis team defeated Madison 8-1. Madison was competitive in all three doubles matches and three of the singles matches against a deep and impressive Highlander team.

Two days later, Madison defeated Fairfax High, 9-0, on Friday, April 13 at Madison. The Warhawks were missing their No. 4 and 5 singles players, while Fairfax was missing its No. 1 and 4 singles players. Whereas Madison simply moved singles players up in its lineup in the No. 4 though No. 6 singles slots, Fairfax had substitutes play in its No. 1 singles and doubles positions.

Madison won all six singles matches. Those individual singles winners for the Warhawks were: No. 1 senior John Adam, who defeated Sai Chindapalli; No. 2 senior John Nothaft, who won over Jisoo Kim; No. 3 Alec Ostapovicz, who defeated Tyler Zane; No. 4 Alex Russell, who won over Mike Rayder; No. 5 Aaron Plymack, a victor over Shiv Shah; and No. 6 Ben Haines, who was a tie-breaker winner over Andrew Arnold.

Madison’s doubles winners were: John Adam and Gunnar Baskin at No. 1; John Nothaft and Alec Ostapovicz at No. 2; and Aaron Plymack and Alex Dondershine at No. 3.

Madison, with the team win, improved to 4-3 on the season.