Sports Notes From Around the Region
Votes

Sports Notes From Around the Region 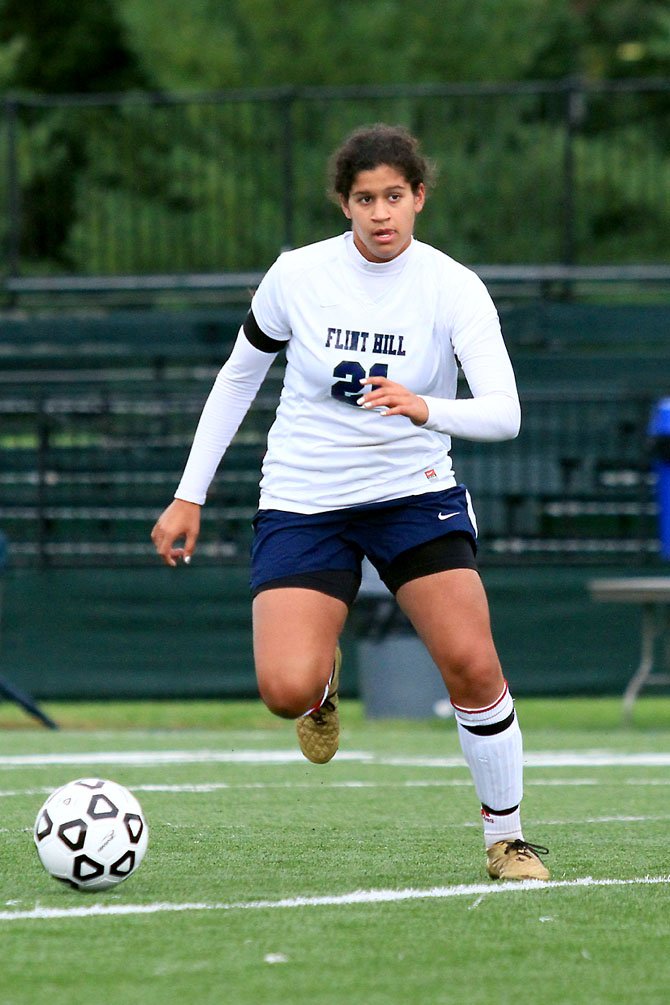 Vienna Sports NotesMarlo Sweatman, a junior midfielder standout for the Flint Hill School girls’ soccer team, has made a commitment to attend Florida State University on a soccer scholarship. Although just an 11th grader, Sweatman has attracted attention from top college soccer programs such as the University of Tennessee and the University of Maryland. But following a recent official visit toTallahassee, Sweatman decided to become a Seminole.

On Wednesday April 11, at Madison High School, the undefeated McLean High boys’ tennis team defeated Madison 8-1. Madison was competitive in all three doubles matches and three of the singles matches against a deep and impressive Highlander team.

Two days later, Madison defeated Fairfax High, 9-0, on Friday, April 13 at Madison. The Warhawks were missing their No. 4 and 5 singles players, while Fairfax was missing its No. 1 and 4 singles players. Whereas Madison simply moved singles players up in its lineup in the No. 4 though No. 6 singles slots, Fairfax had substitutes play in its No. 1 singles and doubles positions.

Madison won all six singles matches. Those individual singles winners for the Warhawks were: No. 1 senior John Adam, who defeated Sai Chindapalli; No. 2 senior John Nothaft, who won over Jisoo Kim; No. 3 Alec Ostapovicz, who defeated Tyler Zane; No. 4 Alex Russell, who won over Mike Rayder; No. 5 Aaron Plymack, a victor over Shiv Shah; and No. 6 Ben Haines, who was a tie-breaker winner over Andrew Arnold.

Madison’s doubles winners were: John Adam and Gunnar Baskin at No. 1; John Nothaft and Alec Ostapovicz at No. 2; and Aaron Plymack and Alex Dondershine at No. 3.

Madison, with the team win, improved to 4-3 on the season.

The Madison High girls’ softball team, following spring break week, traveled to Langley High to take on the Saxons in an important Liberty District matchup last Tuesday, April 10. The Warhawks, who won the hard-fought contest 5-4, found themselves in an early hole, trailing 4-1 after three innings of play. The defense, during those early innings, committed three errors and gave up two unearned runs before settling down. Madison fought from behind and ultimately won the game in nine innings.

Madison’s Kelsey Ross started on the mound for the Warhawks and, over five innings of work, gave up four hits and two earned runs while striking out three. She also intentionally walked a batter. Elizabeth Fallas came on to pitch the final four innings for the win, giving up three hits, striking out two, and issuing one walk.

Tori Lipnicky was the offensive star of the game for Madison, going 3-for-5 with three RBIs. Ross (2-for-5, RBI) and Fallas (2-for-3, walk) each contributed two hits with Ross driving in the go-ahead run in the ninth inning. Kat Olson (1-for-3, walk) and Brittany Powers (1-for-3, walk) added Madison's other hits on the night.

Reston, Herndon Sports NotesHerndon High Sports Update: Girls’ lacrosse just completed a successful spring break road trip with a victory over Laney High in Wilmington, N.C. The Hornets were scheduled to begin their competition within the tough Concorde District this week. …The boys’ varsity soccer team (4-0-2) is off to a good start. ESPN has the Hornets ranked 10th in the nation and second in Virginia. …The varsity baseball team was 3-0 over spring break in Myrtle Beach. Their record is now 6-0 on the season. The Hornets had a tough schedule ahead with home games versus Oakton and Loudoun Valley, and a road game at Centreville. …The boys’ lacrosse team, after dropping their first game of the season, has won seven straight to give them a record of 7-1. Quality wins have come over Lake Braddock, Bishop Ireton and Yorktown.

The 39th Annual Capital Classic high school basketball event is set to take place this Saturday, April 21. The event will consist of a full day of All Star hoops games at T.C. Williams High in Alexandria.

The day’s first game, a girls’ contest, will be at noon time between the Virginia All Stars versus the Maryland All Stars. The local Virginia squad will be under the direction of head coach Fred Priester, who led the Cougars to the Virginia State AAA crown a few weeks ago. At 2 p.m., another girls’ game, between the Prep/Private School All Stars versus the Inner High Stars will be played.

In the evening, there will be a boys’ All Star double-header, beginning at 6 with a preliminary contest between the Suburban All Stars versus the D.C. All Stars. The Suburban All Stars will include Northern Region players such as Westfield’s Zach Elcano (American University), Langley’s Daniel Dixon, Yorktown’s Jack Earley, and Edison’s Matt Murphy. The District All Star team will include Paul VI High (Fairfax City) players Patrick Holloway (George Mason recruit), Tilman Dunbar (Navy), and Coleman Johnson (Fairfield); Episcopal’s Kethan Savage, a former Chantilly High player who will play at George Washington; and Potomac School (McLean) player Cullen Hamilton.

After the first evening game, the main event Capital Classic Showcase, scheduled for around 8, will take place between the US All Stars versus the Capital All Stars. The US All Stars team will consist of five University of Maryland recruits along with recruits from North Carolina, Virginia, Clemson, Virginia Tech, and men’s NCAA tournament runner-up Kansas. The Capital All Stars, meanwhile, will include recruits from Wake Forest, George Mason, George Washington, and Navy.

For more information on all the day’s basketball action, go to www.TheCapitalClassic.com.

The Dominion team is under the direction of co-coaches Jimmy Jang and Choi Kwang-Bok, who have trained world class Olympians and World Class champions.

One member of the team, Maame Biney of Reston, is a sixth grader at Terraset Elementary. In Green Bay, she won all of her races and was awarded the overall winner for her age group (Midget Ladies). She also broke a record in the 500 meters event.

His twin sister, Siobhan Lim, won all her races and was a short track National

Over 240 skaters, from Alaska to Florida and points in between, traveled to Green Bay to close the season.

Chantilly, Centreville Sports NotesCoaches Top 10 Baseball Poll (Week 5): Lake Braddock, Madison High, and Oakton High are the top three teams, respectively. No. 4 this week is defending region champion South County, while Westfield and McLean are fifth and sixth. Tied at the No. 7 position are Concorde District teams Herndon and Centreville. Another team from the Concorde, Chantilly, is No. 8. Rounding out the Top 10 are Liberty District teams Stone Bridge and Marshall. Other teams receiving votes: Yorktown, W.T. Woodson, and Robinson.

i9 Sports is conducting an indoor youth flag football camp in partnership with nZONE Sportsplex in Chantilly the week of Aug. 13 through 17 from 9 a.m. to noon. Camp is open to all youngsters ages 5 through 13 and will feature experienced adult coaching, visits by Redskins/former Redskins players, and certified speed, agility and quickness training - all while having excitement in a week long fun and safe program. For more information, visit www.i9sports.com.

Wildcat Classic: General Dynamics and the Wildcat golf team invite the community to the 8th Annual Wildcat Classic on Monday, April 30 at 1:30 p.m. at Westfields Golf Club in Clifton. The registration fee for this year’s event is $400 per foursome and $100 per individual. Registration includes greens fees, cart, range balls, on-course challenges, a tournament goodie bag, and admission to the awards reception and tournament banquet.

The tournament format will be a four-player scramble. Gross and net prizes will be given to the top teams with the number of awards determined by the size of the field. The highlight of the on-course challenges will include a $10,000 hole-in-one, longest-drive, closest-to-the-pin, and beat-the-pro. Before play, individuals can purchase mulligans and raffle tickets, have their swings analyzed by the pros at the Golf Fitting Studios, and have a chance at $2,500 by winning the putting contest. Other events will include a silent auction, raffle, and door prizes for all. Please visit the tournament website at www.cvhsgolf.org or send an e-mail for more information at geordie.bigus@fcps.edu.

The Girls Basketball Summer Camps, sponsored by the Westfield High Athletic Booster Club, will hold sessions on the following dates: June 19-June 22 (Session 1, noon time to 4 p.m. for rising seventh through 12th graders); July 2 through July 6 (Session 2, 9 a.m. to 3 p.m. for girls ages 8 to 15); and July 16-20 (Session 3, also 9 a.m. to 3 p.m. for girls ages 8 to 15). Please note there will be no camp session on the Fourth of July. The Girls Basketball Summer Camps, which draw youngsters from the Centreville, Chantilly, Burke, and Fairfax areas, will be run by former Westfield High girls’ basketball coach Pat Deegan and assistant Alice Andersen. Current college and high school players will also serve as camp workers. For more information or applications, please contact Pat Deegan at: Pgdeegan@fcps.edu, or by phone at 703-488-6363, ext. 7201.

The undefeated McLean High boys’ tennis team, last Wednesday April 11, defeated Madison High, 8-1, in Vienna. Madison was competitive in all three doubles matches and three of the singles matches against a deep and impressive Highlander team.

Stuart High School in Falls Church will host its annual sports camps this summer. The girls’ combination Volleyball-Basketball camp will be held July 16-19 for grades kindergarten through fifth. Also, a girls’ Volleyball-Basketball camp for youngsters sixth through 10th grades will take place July 23-26. The boys’ basketball Camp will be held June 25 through June 29. For more information and to get registration forms, go to raidersports.org.