Living Life in ‘The Dream Land’ 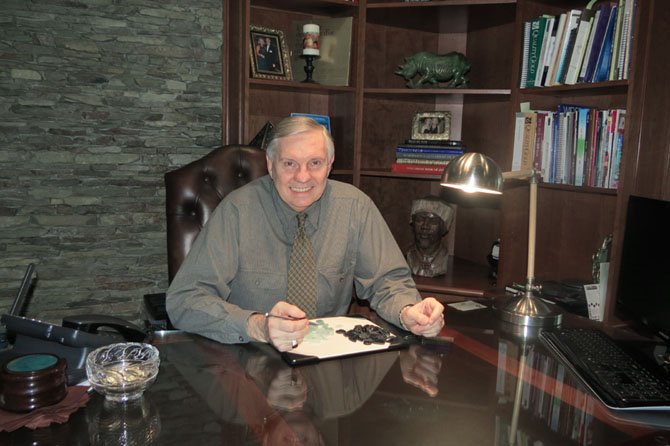 Jorge Adeler, master designer at Adeler Jewelers, has been a part of the Great Falls community for more than 30 years. Pictured above, he sits at his desk preparing designs. Photo by Jennifer Benitz

The American Dream has been shared for generations—some call it an idea; others call it a reality. Many people come leaving behind former lives in search for better ones, not only for themselves but also for their children.

Jorge Adeler is one of those people. Businessman, optimist, entrepreneur and enthusiast are just a few ways to describe the Argentine immigrant.

“I learned to look for ways to make a living by using my imagination,” said Adeler. “That helped me envision opportunities as they crossed in front of me.”

At 27 years old, in 1975, Adeler moved to the United States with his wife and two young daughters after visualizing the direction Argentina was heading in as a nation and not liking what he saw. With only $450 in his pocket and unable to speak English, he faced a rough transition but took on the challenge with fierce and hopeful drive. Now a successful, internationally recognized jeweler, he has a story unlike any other.

“The price was high, but it was the best decision I’ve ever made,” he said. “I’m delighted here.”

Jorge Adeler stands between his daughters, Valentina Adeler Armour (left) and Wendy Adeler Hall (right), both of whom work in the family business. Valentina is the appraiser and apprentice designer while Wendy is the vice president of marketing and philanthropy for Adeler Jewelers.

THE ROAD TO SUCCESS was a difficult one for the self-taught master designer, but neither the challenge nor the fear of failure stopped him. Growing up in Mar del Plata, Argentina, Adeler helped his parents run their hotel and restaurant business. Consequently, he came to the U.S. with the intentions of continuing in the same business, but soon found it wasn’t for him.

Instead, Adeler decided to pursue his own business in the form of trade. He took out a credit line worth $1,000 with Woolworth to buy basic necessities, such as pocket knives, fishing hooks and light coats, before traveling to Argentina and setting up camp in a small village in the mountains of Córdoba to trade for stones. Upon return from his trades, he carved the stones into various types of shelving ornaments—or “something attractive,” as he described them, such as book ends and figurines. He then went around to local boutiques and stores offering his shelving ornaments for display in return for payments as they were sold.

“I had to make sure I made the money back before it came time to pay the credit back,” Adeler said.

Word spread quickly back in Argentina and after five years and 19 trips, Adeler had a loyal group of traders and craftsmen to do business with which allowed him to eventually afford his first gem. As he went following the “line of less resistance,” as he called it, he slowly made the transition from stones to jewelry.

It wasn’t long before Adeler opened his first jewelry store, selling mostly pendants and other small items in Ocean City, Md. As his business expanded, so did the number of stores. Within a few years, he had five jewelry stores in Ocean City under his operation.

His success came with his drive to go against the mainstream of popular demands. While most jewelry stores were selling turquoise stones, something Adeler couldn’t yet afford, he sold other gems that often caught the attention of those looking for something different. One of those out-of-the-ordinary stones was rhodochrosite, the pink national Argentine gemstone.

“When you have something you’re selling that would be much more different because it is something people aren’t looking for, I realized it has its virtues,” Adeler said. “You’ll always have customers searching for something original or different. I began my career doing something different than the rest of the industry.”

FROM THEN ON, Adeler focused on what no one else was selling, forcing him to be more creative and look into new ideas. With an overall goal to do what no one else was doing and present it in a way that would attract the minority of customers looking for something different, he stopped carrying designer pieces in his stores and began making all of his own.

“I placed goals for myself, from challenge to challenge,” Adeler said. “I make mistakes and I learn from them. I don’t have much fear of failure.”

By 1980, Adeler decided to combine his family-run businesses under one roof. Great Falls was the place he chose to call home for his business and family. “Great Falls ended up being one of the most fantastic communities I’ve ever lived in,” Adeler said.

Adeler Jewelry has provided services to 3,500 of the 7,000 households in Great Falls since it opened its doors over 30 years ago and continues to grow each year. Recently, Adeler won the 2012-2013 International Pearl Design Competition Designers Award as well as placing in the top competitors at the JCK “Jewelers Choice Awards.”

In recent months, the internationally recognized jeweler has received requests from various magazines to showcase his designs to Hollywood stylists and celebrities asking to wear his designs, including Sally Fields in the movie Lincoln this year.

Adeler is so appreciative of the opportunities he has been given to succeed in the country he calls “the dream land,” that he makes it a point to give back to the community as much as he can through various donations and volunteer work.

“We believe that if you don’t give back to the community, you break the rules in how society should be.”

His long list of community partnerships include everything from the Red Cross to various organizations benefiting diabetes, veterans and Inova Hospital, and he continues to reach out.