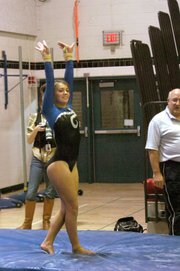 Mary Lynn Clark and the Washington-Lee gymnastics team defeated McLean, Marshall, Lee and Wakefield in a meet on Dec. 10 at McLean High School.

McLean — In a rematch from February’s Northern Region championship meet, the Washington-Lee Generals again defeated the McLean Highlanders in a girls’ gymnastics meet on Monday, Nov. 10 at McLean High School.

About 10 months ago, the Highlanders and the Generals battled each other down to the wire with a region championship on the line. W-L was able to squeak past McLean by less than four-tenths of a point (145.191-144.851) to take home the title. Although it was not as close on Monday night (139.55 to 131.35), it was still a thrilling competition.

“I’m getting used to this over the last three years or so,” Washington-Lee head coach Joe D’Emidio said. “This is our fourth year going undefeated. So, the team I have is great and I’m savoring the moment. It seems like we’re always very close with McLean. I’m enjoying the ride because things will change next year.”

Most of the girls are seniors on the team, and D’Emidio is referring to the notion that much of the team will be headed off to college; he will have almost an entirely new squad on the mats come next winter.

Senior Kylie Auble finished second individually in the all-around with a score of 36.5, two points behind the winner, senior Morgan Stahl of Marshall High School.

“I think we did really well as a team out there tonight,” Auble said. “We’ve practiced really hard and put everything together. There wasn’t that much pressure on us. It’s more of something fun to do. I wanted to enjoy myself, but at the same time win. “

Monday was the second meet of the season for the Generals, so although they won the meet, there are still aspects of their game they need to improve upon before heading to Mount Vernon on Thursday afternoon.

“It’s the beginning of the season, so we’re trying to get all the cobwebs out,” D’Emidio said. “We’re trying to get their routines worked out after the long summer and break. We are moving in the right direction and they are enjoying themselves. For a lot of these kids, we need to get them back into it and get them rolling into the season.”

Although the Highlanders were not able to win on their home turf, it was a strong start to the season.

“The girls were a little nervous this evening because it was their first meet of the season and it was at home,” McLean head coach Courtney Lesson said. “We didn’t care too much about the competition. We mainly just wanted to focus on hitting our routines and doing what we have been practicing. We need to continue to grow and work as a team.”

McLean and Washington-Lee could end up having another showdown at regionals.

“Washington-Lee was definitely our biggest competition coming into the meet tonight,” McLean sophomore Madi Schuman said. “Although they are not in our division, we are looking forward to competing with them at regionals and this gives us something to work on throughout the season.”

Lesson was very pleased with the outcome and she has an idea of what the team needs to work on in order to improve for the next meet.

“We are definitely going to go through the score sheets and check out the bonuses to see what we need to work on specifically,” Lesson said. “We’re going to focus on another strong lineup next time out.”

Although the battle between the Highlanders and the Generals was the meet’s main focus, Stahl stole the show in her own respect.

The Marshall gymnast scored 38.55 points by winning each of the four events during the meet (vault, bars, beam and floors). Although she performed well, it was not enough to help Marshall push past Mclean as the Statesmen finished the meet in third place with 122.9 points.

Both Robert E. Lee High School and Wakefield High School failed to break 100 points. The Lee Lancers finished in fourth place with a score of 96.5, edging the Warriors, who collected 95.5 points to round out the event in fifth place.