‘Making a Difference in the Lives of Others’
Votes

‘Making a Difference in the Lives of Others’ 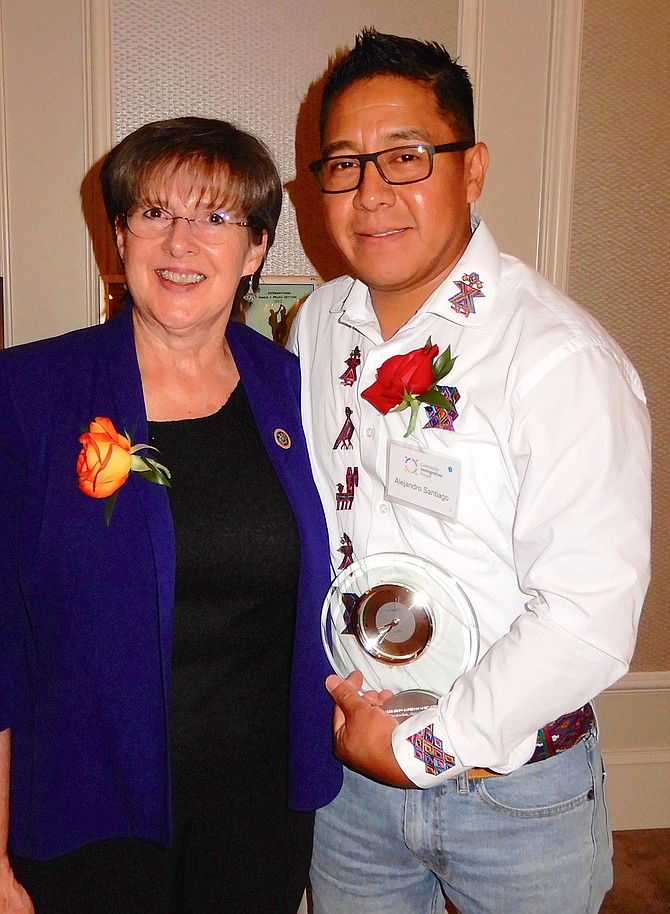 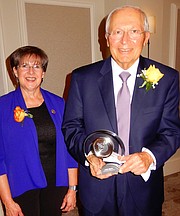 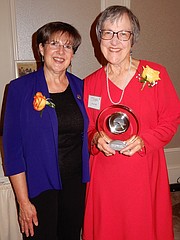 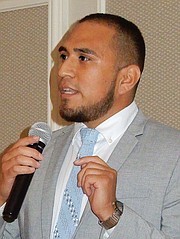 Alice Foltz, A.J. Dwoskin and Alejandro Santiago helped establish the Centreville Labor Resource Center (CLRC) – a place where day laborers seek employment in a safe, welcoming environment. It’s run by the Centreville Immigration Forum (CIF), and this nonprofit honored all three of them at its annual dinner.

The event attracted members of the General Assembly and Fairfax County’s Board of Supervisors and School Board, but the honorees were definitely the stars. After all, said CIF Executive Director Terry Angelotti, “Tonight is a celebration of the people whose work made the CIF what it is today.”

The dinner was held Sept.20 at the International Country Club in Fair Oaks with the theme, “Celebrating Our Global Community: Inspiration, Action, Change.” Emceeing was 2018 awardee Rodrigo Velasquez. “To those involved with the CIF, the work you do and the impact you have on the immigrants and their families is everything – now, more than ever,” he said. “And we’re going to celebrate the progress we’ve made creating a world that’s more just for immigrants.”

“The news we hear can be disheartening,” continued Velasquez. “But there’s hope because the CIF is doing whatever it can to help. Some of you knew me when I was totally undocumented and didn’t know what to do. And, thanks to organizations like the CIF, next year I’m applying to be a citizen of the United States. So, CIF, when it’s hard to get up and continue the fight, know that you’re making a big difference in the lives of others.”

COMMUNITY ORGANIZER John Cano, manages the CIF’s Centreville Commission for Labor Justice (CCLJ), advocating for immigrants at county, state and federal levels. For example, wage theft is sometimes still a problem. It’s when a worker performs the job he’s hired to do, but the employer refuses to pay him. So the CCLJ then fights to obtain the worker’s pay.

Telling how he tried to help a particular worker get the wages he’s owed, Cano said the man “understood he might not receive his money, but he wants to make sure this doesn’t happen to others.”

Next came the awards. Juanita Cabrera Lopez, president of the International Mayan League, introduced Santiago. “People coming here from Guatemala, like him, are fleeing many years of Civil War,” she explained. “Alejandro stepped up to help others have dignity and justice. And at the center, he’s also provided English to Spanish to English translation and interprets for speakers of Ixil, a Mayan language spoken by many of the workers.”

He was also key to organizing the workers and gaining their support for the center. And his willingness to donate his time to establish the center’s procedures and serve on the CIF’s original Board of Directors helped make it a success. Since many of the workers were at the dinner, Santiago addressed the crowd in Spanish, with Velasquez translating.

Receiving his award from Supervisor Kathy Smith (D-Sully), Santiago called it an honor. “This is a dream come true for us, the workers, to be here today,” he said. “Fifteen years ago, I came to this country with a dream for a better life and more opportunities. But on my first day here, I was a victim of violence and discrimination.

“A week later, I was also a wage-theft victim and didn’t know who to talk to about it, except my mom. She told me, ‘Let it go, son; there are better opportunities waiting for you.’ I was afraid to go to work because I wouldn’t get my wages. But within a few years, I got to know some people, including Alice and Jerry Foltz, Edgar Aranda-Yanoc, Stephen Vandivere, Bill Threlkeld and others.

“They had a dream to help the community and create a space where workers could find justice. This is what I was looking for when I was going through wage theft, so I decided to get involved because I believed in hope, opportunity, equality, justice and friendship.

“Now there’s a safe space where my brothers and sisters can work with dignity. United, we are stronger. And because of everyone who’s here today – and for all the workers who do the best they can, day in and day out, I say thank you, with all my heart. My God bless you today and always.”

Former Sully Supervisor Michael Frey introduced Dwoskin, saying he was pleased Dwoskin was getting this recognition. Owner of the Centreville Square Shopping Center, Dwoskin supported the creation of a labor center from the start and continues donating the space where it operates – which is critical to the CIF’s financial stability.

“We were starting to have problems with day laborers gathering on the streets by the library and Al’s shopping center,” recalled Frey. “His tenants asked him what could be done, and I was getting pressure from the community. And at the same time, Alice was holding meetings about this. I knew Al would do what’s right and best for his tenants and the community. And with Alice and other members of the religious community, we began thinking of solutions.”

Frey said Dwoskin proposed having a spot where the workers could get out of the cold and rain and away from the streets. “We knew no public money could be involved, and he offered a space, so it was an easy decision,” said Frey. “And it’s so much beyond just a labor center; it holds language, financial and contracting-skills classes, and there are women, not just men. We couldn’t have imagined in our wildest dreams how well this has worked. Al, thank you and congratulations.”

DWOSKIN, however, called Frey “the real hero” for standing up and being counted. “It’s the kind of political courage we rarely see anywhere. I donated the space, but Alice Foltz was the catalyst for the center. She brought together the community, and the amount of services provided are far beyond what we discussed. Without question, that was the true miracle – it was just amazing.”

Dwoskin’s parents were Eastern European immigrants and asylum seekers who settled in Omaha, Neb. “My father was a spectacularly unsuccessful businessman, but my mother worked in a department store to put food on the table,” said Dwoskin. “After moving to Washington, D.C., in 1964, I eventually found success.” He said Centreville “has so much going for it, and the labor center is the best example of people working together to solve a problem, not just criticizing.”

Before the final honoree, Alice Foltz, was introduced, Velasquez said she “lights up a room and is irreplaceable. She’s worked tirelessly to support, champion and advocate for the Centreville immigrant community.”

Edgar Aranda-Yanoc, senior lead organizer of the Legal Aid Justice Center, told her, “We really love you and appreciate what you’ve done for our community. You’ve been kind and stable and have given us guidance and inspiration.” Likewise, worker Jose Luis thanked Foltz for what she’s done for Centreville’s immigrants and asked God to bless her and her husband Jerry.

A longtime teacher and college professor – and eight-year CIF president – Alice Foltz became an activist in the 1960s. However, she said, “Many decades later, the hateful attitudes and language are still here, so there’s still a lot of work to do. In one early meeting in the library, the room was packed with 100 workers from the corner. They said, ‘We don’t want to cause trouble; we just want to work.’”

It took awhile before the CLRC became a reality. In the meantime, said Foltz, CIF board member O.G. Harper taught English on the corner to the workers waiting there for employers to come by. People taught ESL classes in churches, and GMU students learned the workers’ stories.

At another meeting, an angry resident said immigrants were going to change Centreville. And, said Foltz, “She eventually saw that immigrants are making this community stronger.” From the beginning, the workers helped make the center’s rules, so they’d feel invested in its success, and it paid off. “Jose Luis said no one in his country ever asked his opinion on how to do things,” said Foltz.

Worker Brayan Brito won prestigious college scholarships and now helps others in the community. And other immigrants from the center started their own businesses and now return to the CLRC to hire others.

Although anti-immigrant policies are currently prevalent in the U.S., said Foltz, “We need to thank immigrants for all the work they do in every field. We need more buses to serve our community and wage-theft laws passed. We need to build more day labor centers, and we need affordable housing so those who work in our community can also live there.

“Sharing with others is not a threat – it makes us stronger,” she continued. “This community made this center strong. Starting now, we are a nation that welcomes everyone. Sí, se puede [yes, we can].”

At the Centreville Immigration Forum’s (CIF) annual dinner, Geronimo Martinez told why he came to the U.S. from Guatemala and what the Centreville Labor Resource Center (CLRC) means to him.

“I’ve been fighting for social justice for 15 years,” he said. “My parents survived a war that’s been going on for 37 years. Our only sin was to be Ixil – Mayans. I left my country and my family. And in this country, I was trafficked and hidden in Ohio. I was at risk because I was fighting for human rights.”

Martinez said he faced discrimination because of his language and the color of his skin. “So I came to Virginia and found a place I could call home,” he said. “I experienced wage theft and then found the CLRC. Now my community sees this center as a home for us.”

“Thank you for the support, energy and all you do,” he told the dinner attendees. “Thank you for thinking of our community. All we want to do is work and have liberty. We are not criminals; we are humans. Tonight, I hope and ask with all my heart that everyone stand up to remember everyone who’s died in Mexico and beyond, and the children dying at the border.”

CIF President Hubert Graves said Martinez’s speech illustrates why there’s a CIF and a CLRC. He also noted that the dinner’s three honorees’ commitment, courage and caring “are reflective of what they did for our community. The vision of the CIF is to serve as a forum to unite, and that unity makes us better people.”

Agreeing, emcee Rodrigo Velasquez added, “We still have that hope, that fight and that will to be here. And at the end of the day, immigrants are what makes this country stronger.”