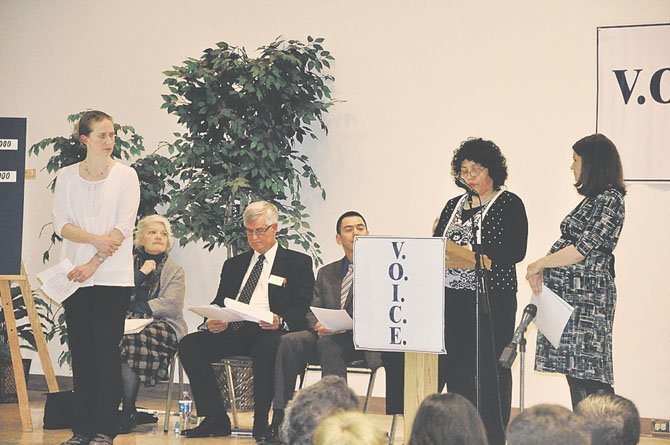 Reston — As a dentist practicing for 11 year, Kristin Donohue says she has seen plenty of lives that have been transformed by access to dental care. As a volunteer at a dental clinic that offers free care in Bailey’s Crossroads she has also seen her fair share of people who don’t have that access.

"Once I treated a young man who had delayed his dental care with another dentist because he needed to have his car repaired," she said. "He simply couldn’t afford not to work, and in his case, a life-threatening dental infection just became a lower priority."

It was stories like these that brought more than 300 people to St. John Neumann Catholic Church Sunday to support free dental care for those in need. Virginians Organized for Interfaith Community Engagement (VOICE) is campaigning to open a dental care clinic in Sterling, which will provide affordable care. Services at the clinic cost around $40, to help with running expenses.

VOICE already advocates for funding for a a dental clinic at Baileys Crossroads, and the Sterling clinic would allow them to serve clients in the western part of Fairfax County. The clinic is run by the Northern Virginia Dental Clinic, which has been operated by the Northern Virginia Dental Society since 1994. They are seeking to raise $200,000 in private contributions to add a full time dentist to work at the clinic Sterling.

More than 300 people gather at St. John Neumann Catholic Church Sunday, Jan. 29 to hear about the people in need of free dental care.

Lori McLean, a member of St. John Neumann’s health ministry and a nurse practitioner, spoke to the importance of dental care.

"I see every day people whose lives are affected by poor dental care. People with diabetes, heart disease and infections from abscesses not treated early," she said. "I know that many of these people have difficulty obtaining decent jobs, because they have smiles that show poorly cared for teeth and bad breath. This affects the ability to feed their families and find housing."

REV. REBECCA MESSMAN of the Trinity Presbyterian Church in Herndon told several stories about church members who have suffered from lack of dental care. She recalled one man who had to remove four teeth by himself, because he couldn’t stand the pain anymore. Another has lost almost all her teeth due to diabetes.

"If people need medical care, we know how to respond. If they have financial struggles there are so many ways that we as a community of faith can come alongside them," she said. "But when it comes to dental pain, we have very little that we can do."

As a dentist who volunteers at the Bailey’s Crossroads clinic, Kristin Donohue said she has seen "countless" lives improved by access to care in her 11 years as a dentist.

"I’ve seen the Bailey’s Crossroads clinic in action, and I can tell you it’s great," she said. "There’s a dedicated staff there, wonderful people who can deliver great dental care to many people."

McLean said she has also seen the other side, when patients are finally able to get the dental care they need.

"I have seen the transformation that good dental care can bring to an individual self esteem when their newly-restored smile allows them to eat food, smile broadly and land that job," she said.

State Sen. Janet Howell (D-32) and Fairfax County Board of Supervisors Chair Sharon Bulova were engaged by VOICE in December of last year to help with fundraising, and both spoke at the event on the results of their efforts. 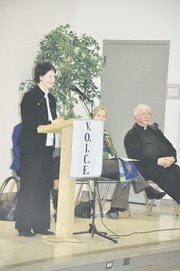 "I was so moved by what they had to say that I did pledge to become personally involved in trying to raise some money for this project," Howell said. "So far, I’ve contacted Reston Hospital Center, and they’re thinking about it. I’ve talked to Northern Virginia Family Services, and they’re thinking about it. I also asked INOVA, and so did Sharon Bulova, and they were able to commit an additional $10,000."

While $50,000 still needs to be raised, both Howell and Bulova said they would remain committed to VOICE until the rest of the money is raised.

Bulova said that she and Supervisor Cathy Hudgins (D-Hunter Mill) approached the county executive last year to get funding put into the program.

"The county executive has not yet released his budget for Fiscal Year 2013, that will come in February, but you can rest assured that we will both be watching for that commitment once again," she said. "My job is not finished, so you can be sure that I will continue to work to find the additional funds."