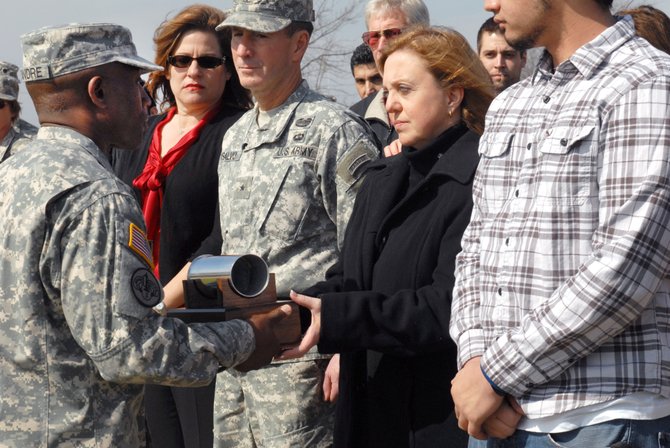 Hildner, 49, was the highest ranking officer to die in Afghanistan, according to Defense Department officials.

Soldiers with the 2nd Battalion, 20th Field Artillery Regiment, fired 11 rounds in one-minute intervals. The cannon salute is a traditional courtesy bestowed upon a general officer following his or her death, and the number of rounds fired is associated with rank, according to a statement released by Fort Hood.

A memorial service for the general will be held at 11 a.m. Feb. 18 at the Spirit of Fort Hood Warrior and Family Chapel. The funeral is scheduled for 8:45 a.m. Feb. 29 at the Memorial Chapel at Arlington National Cemetery.

"This is a tragic loss for the Army, III Corps and for our Central Texas community," said Lt. Gen. Don Campbell Jr., III Corps and Fort Hood commanding general. "Our thoughts and prayers are with his Family and friends. The command will remain focused on assisting the Family through this difficult time."

Hildner served as commander of the 13th Expeditionary Sustainment Command (ESC) at Fort Hood in Texas until his deployment to Afghanistan in December to support the NATO training mission. According to its website, the ESC performs a number of support functions, including maintenance on equipment and distribution of ammunition and clothing. The ESC includes the 1st Medical Brigade, which provides combat medical services and health care.

"The unfortunate and untimely death of Brigadier General Hildner was a shock to our unit and families," Col. Knowles Atchison, 13th ESC rear commander, said in a statement released by Fort Hood on Saturday. "Both forward deployed elements and we at home station are deeply saddened by this loss. We will all pull together through this difficult period and care for one another."

IN 2003, Hildner assumed command of the 13th Corps Support Command's Special Troops Battalion at Fort Hood. During nearly three years in command, his battalion was deployed twice - first to Iraq, supporting Operation Iraqi Freedom by providing logistical support to units around Joint Base Balad, as well as the Abu Gharib prison complex. The second deployment came in the wake of Hurricane Katrina, providing both military and humanitarian support. The 13th ESC led by Hildner supports other units. Hildner served in Iraq during both Operation Desert Storm and the 2003 U.S.-led war. He also served in Kuwait and was part of the last U.S. patrol along the East-West German border before reunification of Germany.

A native of New Haven, Conn., Hildner began his career with the 3rd Armored Cavalry Regiment at Fort Bliss after graduating from the University of Notre Dame in 1984. In 1988, he was reassigned to Germany, where he commanded a ground cavalry troop. During his company command, Hildner's troop deployed to Kuwait and Iraq during Operation Desert Storm, as well as conducting the last U.S. patrol along the East-West German border before reunification.

Returning from Germany, the general served in several assignments at Fort Hood to include 2nd Armored Division comptroller and aide-de-camp to the 4th Infantry Division commanding general.

"This is a tragic loss for the Army, III Corps and for our Central Texas community," said Lt. Gen. Don Campbell Jr., Fort Hood commanding general, in the Feb. 5 statement. "Our thoughts and prayers are with his family and friends."

An investigation into the death is pending, according to Christopher Haug, chief of media relations at Fort Hood.

"All deaths in the combat zone are investigated," said Haug, adding that Hildner did not die in combat.