House on a Hill
Votes

House on a Hill 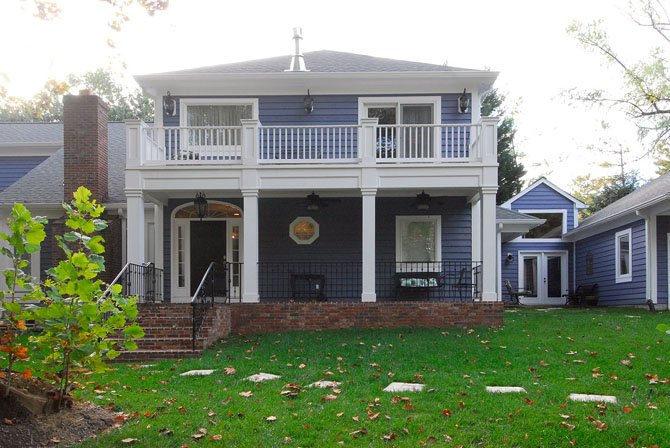 By John Byrd/Special to the Connection

Hunstville, Ala. is a pretty small town-- yet it has three historic districts and more homes in the national register than most places twice its size. Growing up in such a community, Gina Jones is understandably attracted to welcoming porches and grand foyers--hallmarks of the antebellum style.

Alas, when Jones, an Internet publisher, relocated to Northern Virginia ten years ago, the place that came closest to suiting her family's needs was an Oakton contemporary-- one of four on a private drive at the top of a hill.

Jones adapted to her new setting just fine. But after occupying the house for a few years, certain shortcomings became apparent. 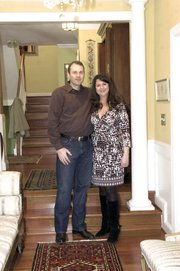 Dennis Parker and his wife Gina Jones in their remodeled Oakton home.

"I was looking for a larger master bedroom, a guest room… and I really wanted a front porch and a foyer," Jones recalls. "The foyer was important in my childhood home. It's where the house begins"

The practical problem with the last part of the vision, however, was the steeply sloping grade immediately outside the existing front door. The more Jones learned about her home's inherent site problems, in fact, the more the search for new square footage became concentrated on the rear elevation.

"We wanted to stick to our budget," Jones recalls "so the remodeling proposals we received were all focused on the back of the house."

It was at this juncture that Jones met Sonny Nazemian, president of Michael Nash Kitchens and Homes.

"Sonny plan's not only made our new façade feasible-- but actually created more square footage than we'd thought we could afford," Jones explains. "Naturally, we were thrilled with that."

The existing front patio served as a 14-foot by 26-foot template for a two-level enclosure.

The lower level now accommodates a spacious foyer with ten foot ceilings, a first level guest room and a full bath. On the second level, the project co-opted one of three existing bedrooms to form a substantially larger master bedroom suite.

Best yet, the new site plan permits a top item on the wish list: a 25-foot-long, two level front porch that, Jones says, evokes the graciously welcoming facade of her childhood home.

Before Exterior Front elevation - Jones purchased an Oakton contemporary with a deeply sloping front yard that seemingly made it impossible to add on to the front elevation.

Beginning with an Adam-style front door bordered by sidelights and a Palladium window, the foyer is embellished in hardwood flooring, crown molding and embossed knee high panels. Two Doric columns on either side of a stair accessing the main living area are both decorative and structural.

Adjacent to the foyer, the new first level addition provides for a home office that doubles as a guest suite with a private entrance. The suite includes a full bath finished in Brazilian slate-tile, granite countertops and cherry cabinetry.

Upstairs, the new front-facing master bedroom is more than double the size of its predecessor.

The master suite opens out onto the upstairs porch with a stunning view of wooded acreage abutting the property. 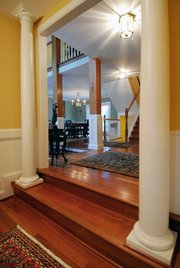 Two Doric columns on either side of a stair accessing the main living area are both decorative and structural. The new floors are Brazilian cherry wood.

In a corner of the master suite, Nazemian installed a gas fireplace, elevating it for visibility from the bed.

"It's a Bed and Breakfast fireplace," Jones said, "and it's also an effective heat source."

"It's the details that make the whole house so cohesive," Jones said.

To give the eclectic architecture a unifying cast, the exterior elevations are clad in cedar shake and painted a vivid Wedgwood blue.

"It just works beautifully," Jones said. "And it feels like home."