Honoring Grads Who Choose to Serve 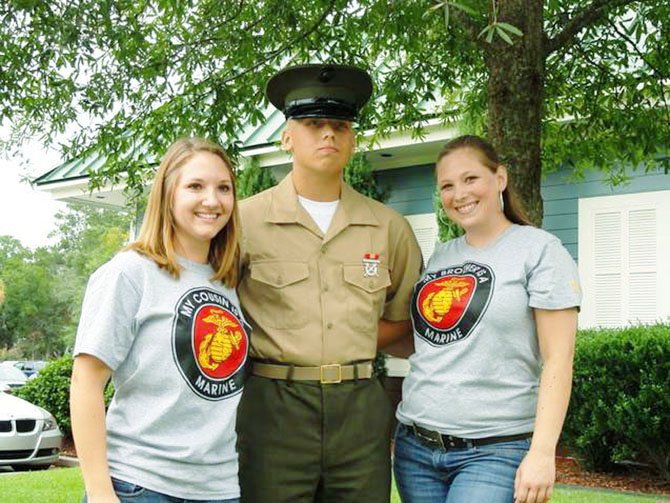 PFC Daniel Kellam on graduation day from boot camp on Parris Island, S. C. on Sept. 16. He is standing with his cousin, Heather Gillespie (left) and sister, Kristen Kellam (right).

When Carolyn Kellam’s 17-year-old son, Danny, asked for permission to enlist in the U.S. Marine Corps last year, she said "the mom in me was scared to death, but the citizen in me was very proud."

Christine Zinser remembers the exact day her son, Philipp, asked to enlist. It was Valentine’s Day, 2011. Instead of flowers or chocolate, her son stunned her by declaring his intent to become a U.S. Marine.

"I thought I would be finalizing college selection and admission paperwork," Zinser said. "At a time when our nation was at war, my son was choosing a military career and because of his age, needed my permission."

Both Burke moms struggled with questions. Would they be sending their sons into harm’s way? What would their sons do if they just said no. Their fear eventually gave way to a sense of pride, and they allowed their sons, then seniors at Robinson Secondary School, to enlist.

But another obstacle was around the corner.

"As it was nearing the end of his senior year, and having been the parent of other students who were recognized for their academic or athletic achievements at graduation functions, I just assumed that the young men and women who were making the same decision as my son would receive recognition at their graduation ceremonies," Zinser said.

She was wrong. Frustrated by repeated attempts to get enlistees recognized during Robinson’s graduation ceremony, Zinser decided to take action. In three weeks, she organized a separate ceremony with the help of Kellam, Braddock Supervisor John Cook, and an organization called Our Community Salutes. The ceremony for all Robinson military enlistees, held at the Braddock District Hall last June 9, was standing room only.

"I think it’s a great idea," said Cook. "We ought to be recognizing these students for their commitment and sacrifice. I’m glad to see the school board talking about it."

Although their sons completed boot camp after graduation, the lack of formal recognition by FCPS still rankles both moms.

FOR THE PAST FEW MONTHS, they have been lobbying members of the Fairfax County School Board to ensure that any student who chooses to serve is recognized during high school graduation ceremonies.

Several school board members said they supported a uniform policy for 2012 graduation ceremonies.

"There is so much to be gained in honoring these students, and nothing to be lost," said school board member Elizabeth Schultz (Springfield). As the daughter of a Navy Captain and mother of four sons, she said she feels strongly that all FCPS graduations should include recognizing enlistees by allowing them to wear honor cords at their graduation ceremonies.

"I want it done for this year. I’m not about kicking the can down the road," Schultz said. "I see this as a policy issue that, rather than being left up to the discretion of each individual school principal or cluster, we should do consistently across our student body."

Schultz made sure the issue came up during the school board’s forum session on Jan. 26. "Forums," generally held before each regular board meeting, are sessions in which the public can attend and observe but are not invited to speak, and board members determine if any issues merit further discussion during formal meetings.

Christine Zinser and Danny Kellam attended the Jan. 26 forum. "I really feel like these kids are a forgotten spoke in the wheel of recognizing our military families," Zinser said after the forum.

"We laud those returning from war, mourn those who have fallen, show unflinching support for the families of active duty military personnel, compassion for those who sustain injuries and immense respect for our veterans," Zinser added. "But the young men and women who choose to serve, especially when our nation is at war, go unrecognized."

BOARD MEMBER Ted Velkoff (At-large) said he supports the idea, but is not certain it needs to be policy.

"We’re in information-gathering mode, but I believe there will be consensus around this, whether it’s encouragement to students and principals to recognize students with the cords, or implemented through policy," Velkoff said. "I would be astonished if there’s any resistance to this."

Pat Hynes, who represents the Hunter Mill district, said in an email to Zinser that she is "hopeful that we can do whatever is necessary to ensure they get the recognition they deserve as they graduate."

Deputy Superintendent Dr. Richard Moniuszko said schools are reluctant to abandon their traditions to a "one-size-fits-all" motion, adding that recognition at graduation should be in line with the decorum at each school.

He said types of recognition at commencement is not a level of detail that traditionally warrants a formal policy, but rather a district guideline or regulation.

Schultz said the board asked principals to come to the next school board meeting with ideas on how to implement a policy.

"We don’t need to put up administrative hurdles. With a little bit of directed effort, we can make this happen. We need to send the message to these students that we’re proud of you, and we acknowledge you," she said.

Kellam said she would like to see recognition given to every graduating Fairfax County senior who is enlisting in the military right after graduation.

"I feel that these courageous young men and women deserve some recognition and feel that a red, white and blue cord worn at graduation is a fitting tribute of their dedication to our county," Kellam said.

A Fairfax County 9-1-1- operator, Kellam said only one percent of graduating seniors volunteer to enlist in the military. "That one percent needs to be acknowledged."

"They want to fight for our country. It’s awful and wonderful at the same time. My son is being deployed in April. It’s hard for me to talk about without crying," Kellam said. "Knowing that the community appreciates their service is a huge deal mentally when they are deployed."

"Wearing the cord to the graduation ceremony embodies the mission of FCPS which is to inspire, enable, and empower students to meet high academic standards, lead ethical lives, and demonstrate responsible citizenship," Zinser said. "If enlisting in our armed services isn’t one of the highest examples of responsible citizenship, I fail to see what is."