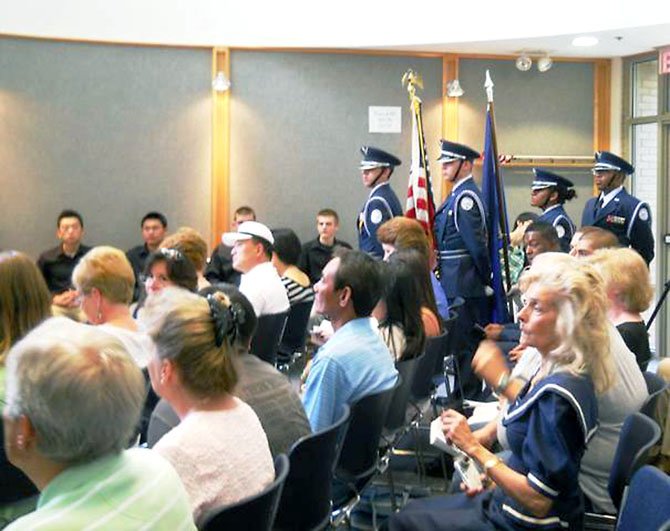 The first ceremony was held at Braddock Hall last June, 2011. U.S. Rep. Gerry Connolly’s office helped organize the ceremony along with Braddock Supervisor John Cook and Our Community Salutes, a nonprofit created in 2009 to recognize and honor high school seniors who plan to enlist in the military immediately after high school graduation. Photo by Victoria Ross.

After a majority (7-5) of Fairfax County School Board members resisted a uniform policy to recognize military enlistees with honor cords during graduation ceremonies at its Feb. 13 work session, Elizabeth Schultz (Springfield) launched a campaign for a public hearing on the issue.

During the all-day work session, Schultz sent an email notifying Carolyn Kellam and Christine Zinser that the board heard from several "handpicked" FCPS principals "who sought to retain autonomy for highly-individualized graduations," Schultz wrote.

She said she was "grossly disappointed we are even talking about this in terms of 'require' or 'compel' rather than seeing a 'race to embrace' this!"

Instead of a standardized policy, the board crafted the following motion to be presented as "new business" at its Feb. 23 meeting, and an "action item" at its regular board meeting on March 8:

"Direct the superintendent to require high school principals to recognize at commencement exercises those graduating seniors who have enlisted in the military; the recognition should be in a manner consistent with the decorum of each individual school’s ceremony."

McElveen, who, at 27, is one of the youngest elected officials in Fairfax County, said he initially supported the idea, but changed his mind after hearing from several of the principals who spoke at the work session.

"After hearing the perspective of the principals and drawing on my own experience as someone who organized a graduation ceremony as a class president ‘back in the day,’ I remembered how students took pride in planning their ceremonies and that every school's ceremony has a different flavor," McElveen said.

McElveen said this essentially means that each high school determines its own graduation regalia, and cords take on different meaning at each school. Some schools don’t use them at all, he pointed out.

McElveen said he supported Dan Storck’s proposal that called for all schools to recognize enlistees at graduation ceremonies, but left it up to the students in each community to determine how enlistees would be recognized.

"It provides a great learning experience for those students to reflect on the importance of enlisting in the armed services, much more than would another centrally-mandated ceremonial requirement," McElveen said.

"Our job is to keep students at the center, and Dan's proposal did just that."

But Schultz said anything short of a standardized graduation policy was disappointing.

"I am very sad that we didn’t vote for Honor Cords for our enlistees today," she said. "Seven of my fellow school board members do not value the enlistment and service of our graduates into military service for their behalf enough to seek a singular form of recognition, but at least we got agreement that schools must include some measure of outward, meaningful recognition at the actual graduation, not just Senior Awards."

Schultz said she has requested "transparency," by giving the public an opportunity to address the issue prior to the school board making a final determination on March 8. "I have asked that it be placed on new business and we conduct our vote publicly after constituents have been heard."

Residents may sign up online to speak at a regular board meeting about a specific presentation, a new business item, or an action item. Residents may also mail written comments to the school board office, 8115 Gatehouse Road, Suite 5400, Falls Church, VA 22042, or e-mail the school board members at SchoolBoardMembers@fcps.edu.

To sign up online to speak at one of the meetings, go to http://www.fcps.edu/schlbd/meetings/requestspeak.shtml