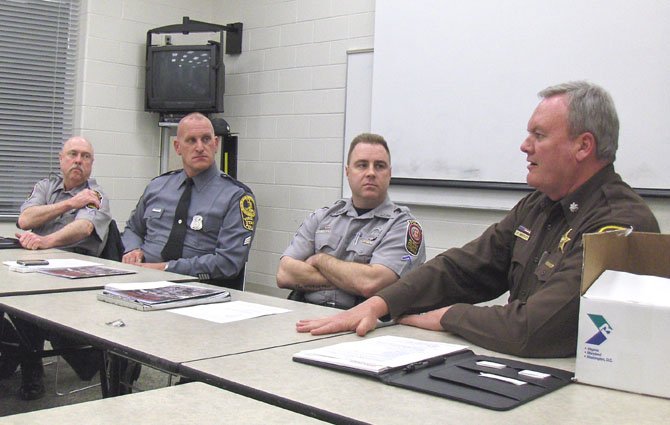 When it comes to places to live, the Sully and Fair Oaks districts are among the tops in Fairfax County. And four public-safety officers presented crime statistics to back it up at the Jan. 25 meeting of the Sully District Council of Citizens Associations.

"Sully is one of the slowest of the districts for crime," said police PFC Pete Katinsky of the Sully District Station. "We’ve had a few rashes of burglaries, such as when the homes of people from India were burglarized for gold. We mainly have property crimes, and a lot of them could be prevented if people would take their valuables out of their vehicles or hide them and lock their doors."

He said local residents have left their wallets, laptop computers, cell phones and even cash in plain sight in their cars, with the doors unlocked. Said Katinsky: "This just presents a crime of opportunity to the bad guys."

The assaults are usually domestic violence, he said, and the property-destruction cases involve vehicles or other personal property. As for DUIs, the number dropped from more than 200 in 2010 to 83 in 2011. Besides that, said Katinsky, "Sex offenses — including exposures — almost dropped in half from 2010 to 2011 from 24 to 13."

However, PFC Wayne Twombly, crime prevention officer with the Fair Oaks District Station, said his district may even be a bit slower than Sully, crimewise, especially in the winter. He noted, though, that police are seeing a rise in fraud cases against senior citizens, and "That’s always a concern."

There have been 45 larcenies of tools from work vans since summer, said Twombly, and almost half have occurred in the parking lots of extended-stay hotels. He said 28 percent of these thefts happen between Wednesday night and Thursday morning.

Lt. Col. James Whitley, chief deputy/operations, with the county Sheriff's Office, presented some history along with his statistics. He’s been with the Sheriff’s Office for 31 years and has seen many changes since he began.

Only 1 percent of the applicants to the Sheriff’s Office are actually hired, said Whitley. "It’s a rigorous process," he said. "One-fourth of our sworn staff is female, and one-third of the force is non-white, so we have a whole lot of diversity."

He said a great deal of their work is focused on cutting down recidivism. "We present our staff as role models," said Whitley. "Many [people who are arrested] never had anyone to look up to."

Furthermore, he said, "An estimated 70 percent of our inmate population has substance-abuse problems, and 16 percent is severely mentally ill and should be in mental-health facilities. We’re working with the state, trying to get more hospital beds for them. We also try to get them connected to job skills."

Sgt. Robert Alessi with the Virginia State Police, has worked out of the Fairfax office on Braddock Road since December 2006 and has served almost 25 years with the state police. "We’re mainly an assist agency, helping at both the local and federal levels," he said. "We all do the same thing and we’re there for each other."

There were only 300 Virginia state troopers 75 years ago, and now there are 1,800. "The interstates are our primary responsibility," said Alessi. "We do speed enforcement on I-66."

Locally, he said, "On I-66 at Route 28, we’re having huge problems, mornings and afternoons, with traffic backing up on the ramps and people cutting in [to take the Route 28 exit] at the last minute. We’re putting extra troopers there to try to stop that."

But help is on the horizon, he said. "They’re going to possibly open up the shoulder of I-66 as far back as Stringfellow Road," said Alessi. "Opening up the shoulder prior to the merge area [for the Route 28 exit] will get us some temporary relief so traffic could get on [the shoulder] quicker. They’re also going to extend the [exit] ramp and make it two lanes; construction should begin in 2014."

He said he and his fellow troopers attend many meetings "to make the traffic easier out here." Alessi also reminded motorists what to do when they see an officer stopped on the side of the road. "Drivers in the lane closest to him must move over one lane as soon as possible," he said. "It’s a law; and if they don’t do so, they can receive a summons and could possibly be fined $1,000 in court."

So does he have any firsthand knowledge of this danger? Said Alessi: "I’ve been hit by three cars and run over by a tractor trailer."