Urban Renewal on the Waterfront
Votes

Urban Renewal on the Waterfront 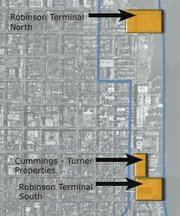 In the game of Monopoly, players that have four houses on each property in a color group can buy a hotel from the bank and plunk the red plastic piece down and start raking in cash. Alexandria City Council members are ready to roll the dice on a similar strategy this week, overturning a longstanding ban on hotels along the waterfront and increasing the allowable density available to developers there. Property owners at three parcels stand to gain because the value of their property will increase dramatically, and city officials say adding 450 hotel rooms on the waterfront will add new revenue to install flood mitigation and create new public spaces up and down the waterfront.

“It really comes down to one big question: What do we get for a return in a modest amount of density?” said Councilman Paul Smedberg last week during a work session at City Hall. “Are the additional amenities — the five and a half acres of open space, the design of great public spaces, the flood mitigation that protects those spaces and the art and history elements — are they worth it?”

Critics of the plan say they’re not. A group known as Citizens for an Alternative Alexandria Waterfront has been speaking out against the proposal for most of the year, issuing its own report in October. Titled “Parks, Arts and Museums: The Key to Rediscovering, Protecting and Revitalizing the Alexandria Waterfront,” the report recommended keeping the existing zoning along the waterfront rather than increasing the density available to property owners. It also recommends against overturning the longstanding ban on allowing hotels on the waterfront, suggesting that the city work toward creating an Alexandria Maritime Museum instead.

“The plan that’s currently under consideration prevents us from creating a great waterfront,” said former Vice Mayor Andrew Macdonald, who has been leading the charge against the city’s efforts. “Two years of hearings were a monologue at best because no real options to hotels were ever presented or accepted.”

Robinson Terminal North: Owned by the Washington Post, this site is expected to be redeveloped in the near future. The small-area plan currently under consideration allows for half the site to redevelop has a hotel and the other half to redevelop as multifamily residential site. The expected implementation would be between three to five years.

IN MANY WAYS, the waterfront small-area plan mirrors the debate over urban renewal that took place in the 1960s and 1970s. Back then, advocates for urban renewal said demolishing several blocks of historic buildings in Old Town was necessary to create a new sense of vibrancy and drag Alexandria into the modern world. Then as now, a handful of property owners stood to gain financially, and city officials were eagerly eyeing new tax revenue that would come from redevelopment. The effort created what is now known as Market Square, which many modern-day supporters of urban renewal say is the crown jewel of the urban renewal movement.

“The old buildings were run-down and dilapidated,” said the former Councilman Win McConchie in a 2010 interview shortly before his death. “Urban renewal was the turning point. There was no building that was torn down that was worth saving.”

Even today, many people disagree with that assessment — an indication that disagreements about the waterfront plan are likely to linger into the coming decades. Opponents of the modern-day plan to allow hotels and increase density on the waterfront say that moving forward with the current plan would be repeating the mistakes of urban renewal. By undercutting the fabric of the existing waterfront for the sake of raking in new revenue and appeasing powerful forces in favor of development, they say, the city is making a Faustian bargain that will remain as controversial as urban renewal.

“There’s this simplistic thinking that more development brings more money,” said former state Sen. Patsy Ticer (D-30), who worked with her late husband Councilman Jack Ticer against urban development in the 1960s and 1970s. “I don’t think people have stopped to think about the consequences.”

Cummings/Turner Block: Owned by the Cummings family and the Turner family, these sites are part of a block that has a total of 100,992 square feet of existing buildings. The small-area plan under consideration could more than triple the density at the site now, increasing the allowable density by 50 percent. A hotel could be constructed within the next three to five years.

CITY OFFICIALS fear the legal and financial consequences of taking no action. Back in 2008, when planners first started brainstorming about a waterfront small-area plan, they were slapped with a lawsuit from Robinson Terminal Corporation. Charging that city officials engaged in “illegal spot zoning” by reducing allowable density at Robinson North in 1992, the lawsuit said that the land owner was entitled to develop according to a 1981 settlement agreement.

“Robinson now desires to cease using the North Terminal property for warehouse and terminal purposes,” the 2008 lawsuit explained. “Robinson has designed a development plan in accord with the provisions of the Settlement Agreement and has determined to proceed with such a development.”

Officials from the company then began a public-relations campaign, meeting with community members to show them architectural drawings outlining a concept that would have included a hotel at the site. Robinson Terminal eventually dropped the lawsuit, although the threat of a potential legal action still looms over the planning process. When city planners released the concept plan for the waterfront in 2010, it increased the density to what Robinson Terminal Corporation was seeking in the lawsuit. It also overturned a longstanding ban on hotels along the waterfront.

“We were not going to be bullied,” said Planning Director Faroll Hamer. “At the same time, we viewed the lawsuit as an opportunity.”

Robinson Terminal South: Owned by the Washington Post, this site is expected to be redeveloped after Robinson North. The small-area plan currently under consideration allows for half this site to redevelop as mixed-use with a hotel and the other half to redevelop as residential. The expected implementation would be between five to 15 years.

THE DEBATE ABOUT property rights on the waterfront dates back to 1791, when Maryland ceded a portion of its territory to the United States for the creation of a permanent seat of government. At that time, the boundary between Maryland and Virginia was a high-water mark between the two states, which ceased to be a boundary upon the creation of the District of Columbia. That 1791 water mark later became the basis for a 1973 lawsuit brought by the Nixon administration’s Department of Justice against 34 Alexandria landowners, including the owners of Robinson Terminal.

A settlement agreement was reached in 1983 limiting development to 238,816 square feet at Robinson Terminal North with a height limit of 66 feet. But when the city was considering a small-area plan a decade later, planning officials decided to limit the development to 195,296 square feet with a height limit of 55 feet. Planning documents from the era indicate that city officials from that era clearly felt they were well within their rights to downzone the property.

“Nothing in the waterfront settlement agreements prevents the city from reducing heights and densities,” wrote then-City Attorney Phil Sunderland in a 1990 memorandum.

Now things have changed. During a work session last week, current City Attorney James Banks indicated that failing to increase the density at Robinson Terminal North could put the city in legal jeopardy. Although he said he didn’t want to preview any legal argument he might use in court, Banks said that inviting a lawsuit would be a gamble because it’s unclear which side would prevail in court. And the implications of losing in court could mean that city planners would forfeit the controls currently outlined in the plan.

“Even though we acknowledge that Robinson Terminal lawsuit has certain merit to it, we also believe, frankly, that the city’s position about the efficacy of the 1992 rezoning has some merit to it as well,” Banks told City Council members and Planning Commission members. “That’s exactly the kind of case in which no one could truly predict what the result would be.”

NOW THAT THE waterfront plan is headed to a final vote this weekend, the 2008 lawsuit has become a ghost haunting the process. Planning officials say failing to adopt the current plan could put the city in a difficult position — one in which the Robinson Terminal Corporation would get the additional density without amenities such as one-acre public pier or increased regulatory control for restaurants and hotels. Opponents say the city is folding to powerful interests without standing for the interests of the city.

“The city is arguing that failing to upzone is downzoning?” asked Katy Cannady, a frequent critic of the plan. “That’s the most Orwellian thing I’ve ever heard.”

Supporters of the plan include the Alexandria Chamber of Commerce, the Parks and Recreation Commission and a handful of land-use attorneys who plan to benefit if developers are free to build hotels along the waterfront. They say the tax revenue from the hotels are needed to pay for the new public parks and open spaces that will be part of the redeveloped waterfront. With a majority of City Council members in agreement, the public hearing on Saturday is likely to approve the controversial plan and spark years of debate in the future.

“We’re concerned that it might not go far enough,” said Andrew Palmieri, incoming chairman of the Alexandria Chamber of Commerce. “But we certainly think that what’s on the table is worth moving forward with.”

Opponents hoped to force a supermajority of six members in order to pass the plan. But city officials say that process is designed for a rezoning, not a text amendment to the Zoning Ordinance, which is what’s on the docket for Saturday. Those seeking the supermajority indicated this week they’re likely to appeal that decision to the Board of Zoning and ultimately the Alexandria Circuit Court. Some opponents have also talked about potentially challenging the plan as “illegal spot zoning,” meaning that council members could find themselves in a lawsuit whatever decision they make on Saturday.