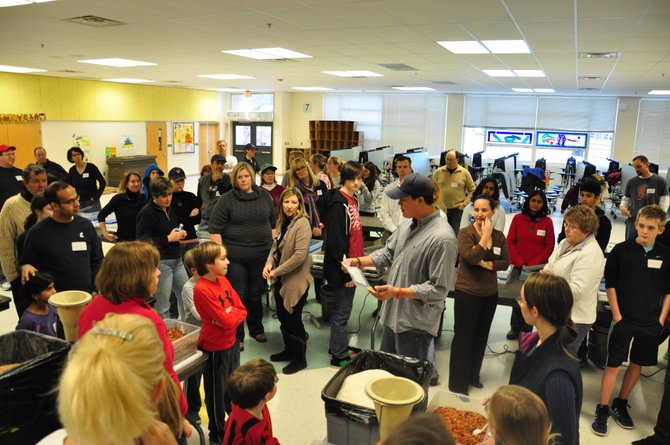 Dominic Alexander of Stop Hunger Now shows hundreds of volunteers how to package nonperishable meals to be send to starving people around the world at Colvin Run Elementary School Sunday, Jan. 22. The volunteers packaged more than 25,000 meals during the event. Photo by Alex McVeigh.

Vienna — Colvin Run Elementary School Principal Stephen Hockett thought everything was all set for the school’s Stop Hunger Now event Saturday. Friday evening he was putting the finishing touches on the setup in the gym when the alert came out: Fairfax County Public Schools were closed Saturday.

"We had everything unloaded and set up, when I got the text," he said. "We tried to get the word out about moving it to Sunday, but that also meant we had to move everything into the cafeteria, because we have basketball in the gym on Sundays."

But the delay didn’t deter hundreds of members of the Colvin Run community from showing up to package 25,000 nonperishable meals for starving people around the world. 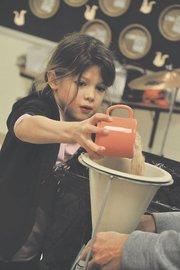 Sophia Ambrose, 6, pours a scoop of soy protein into one of 25,000 meals packaged at Colvin Run Elementary School Sunday, Jan. 22, as part of the school’s Stop Hunger Now Event.

Stop Hunger Now is a nonprofit that provides community groups with the means to package meals that include rice, soy protein, freeze-dried vegetables and a vitamin-enhanced seasoning. The meals are good for up to three years.

Over the two 1.5-hour shifts, volunteers turned the 50-pound sacks of protein and rice into packed boxes which will be put into a shipping container and sent to the nearest place of need.

"It was a great response, especially with the last minute change, we didn’t know what to expect," said Dominic Alexander of Stop Hunger Now. "But people showed up in droves and really worked hard."

The meals cost 25 cents apiece, and students used any and all means at their disposal to raise money for them. They did chores, sold lemonade and saved their change.

"It was a fun event, and pretty easy to do," said second-grader Lily Flint. "I liked pouring the cups of rice into the bag."

One of the parents made up a batch of meals for people to sample what they’re feeding others with. Many said it tasted like chicken-flavored Rice-A-Roni.

"It’s pretty good, I could eat it for school lunch if I had to," said Katharine Frothingham, a second grader.

Hockett said the event was a perfect activity for the environment the school is trying to foster.

"There aren’t many things that entire families can participate in and make a real difference," he said. "As part of the school’s character education program, we’re trying to get every grade involved in service learning."

Volunteers package sealed nonperishable meals put together at Colvin Run Elementary School Sunday, Jan. 22. Hundreds of volunteers at the school packaged more than 25,000 meals during the day, as part of an event for nonprofit Stop Hunger Now.

Almost 90 percent of Stop Hunger Now meals go into schools, which gives parents an incentive to send their children to local schools. Alexander said statistics suggest that enrollment in schools can double and triple "almost overnight" when parents discover their children can be fed at schools.

"The fact that they’re putting meals into schools to help starving children eat and learn definitely makes it a special interest for us," said Assistant Principal Ray Lonnette. "The kids get the message that they can help feed someone with as little as a quarter, and it makes them think about the real impact they can have on the situation."

More information on Stop Hunger Now can be found at www.stophungernow.org.