Churchill senior Thomas Geenen, sporting long blue sleeves, squared up in the left corner and, with a smooth stroke, buried his first 3-pointer of the season during the second quarter against Walter Johnson on Jan. 13. 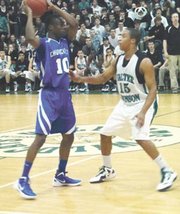 After the game, Geenen, teammate Sam Edens and head coach Matt Miller each acknowledged the display of perimeter potency. However, Geenen’s biggest contributions to Friday’s victory over the rival Wildcats were prolonging possessions and finding ways to get quality shots for his teammates.

“I was just trying to get in good position to clean up their misses, keep that momentum going on the offensive end so if they did miss a bucket we’d still get something out of that possession.”

The 6-foot-6 Geenen grabbed a team-high 15 rebounds during a 62-56 victory at Walter Johnson. Geenen finished with nine points, but on several occasions he focused on settling the offense and working the ball to the open player rather than forcing a shot.

“I know my role on the team,” Geenen said. “We have scorers around me with [Dominique Williams] and Sam [Edens] and to a certain extent Christian [Bonaparte], he was doing well tonight. I was just trying to get in good position to clean up their misses, keep that momentum going on the offensive end so if they did miss a bucket we’d still get something out of that possession.”

Geenen grabbed four offensive rebounds, including a putback he converted in midair and turned into a three-point play after drawing a foul. Geenen had 10 first-half rebounds as Churchill built a 28-20 halftime advantage. What makes him such a strong rebounder? For Geenen, it’s a finesse approach.

“I’m not going to lie, I’m kind of afraid of contact — I shy away,” he said. “But I just see the ball pretty well off shooters’ fingers. I see where the ball is going to miss, long or short, and I just try to get position and outjump everyone.”

Geenen has twice scored 17 points in a game this season, but on this night he focused on getting the Bulldogs high-percentage shots.

Two players who benefitted from Geenen’s approach were Edens, who scored a team-high 16 points, and Kyle Edwards, who finished with 13.

“He gets like every rebound,” Edens said. “When you need an assist or something like that, he’ll come through. He’s a leader. He’ll do all the little things you ask and he’ll score when he has to.” 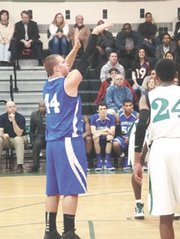 Walter Johnson scored the first eight points of the third quarter to tie the score at 28-28. Churchill responded with a 19-4 run, including a trio of 3-pointers, to take a 47-32 lead. The Wildcats battled back, using a 12-0 fourth-quarter run to cut the Bulldogs’ lead to 55-53, but Churchill knocked down 7 of 14 free-throw attempts in the final 2 minutes, 15 seconds — compared to 3 of 4 for Walter Johnson — to secure the victory.

The win improved to Churchill’s record to 9-3, including a first-place 4-1 mark in the 4A South Division. The Bulldogs improved to 5-0 on the road.

“I feel like we approach every road] game real business-like when we walk in,” Edens said. “Like we’ve got to get the job done.”