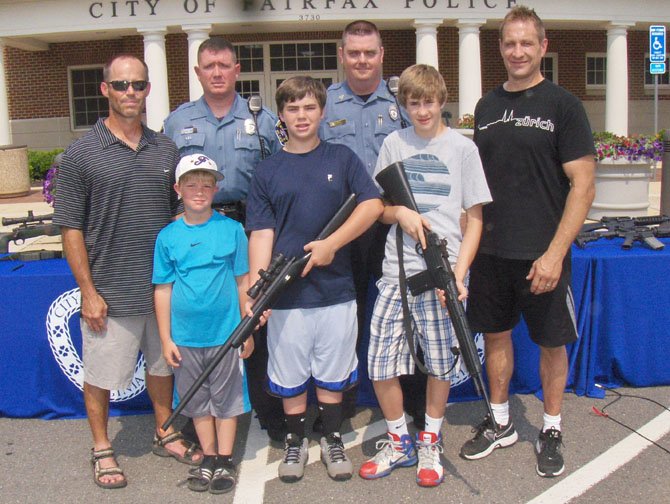 *If a law-enforcement officer approaches while you’re carrying a replica weapon, immediately stop and follow his or her commands.

*Make sure everyone who can see you with this type of gun knows you’re playing a game with a pneumatic gun – Airsoft, BB or pellet.

*Obey all laws when carrying or using these weapons; there’s a difference between role-playing with these guns and actually firing them.

*Obtain permission from the property owner before playing with replica weapons on his or her property.

Besides police and sheriffs, some Fairfax fathers and sons also attended last week’s press conference on replica weapons. The sons hadn’t done anything wrong, but they regularly use these weapons to play a popular game called Airsoft.

"A couple guys on each team work together to eliminate the other people," explained Brady. "You’re using replica weapons that look like real guns like pistols and sniper rifles. We play in the woods or in our backyard."

A few months ago, said Wilkinson, "There was incident in the community where some kids had been seen carrying weapons, and citizens called Fairfax City police. The police later gathered the names of local kids known to play Airsoft."

Next thing Wilkinson knew, Fairfax police Sgt. Kyle Penman was at his home, interviewing him, his wife and Brady. "We were quite surprised," said Wilkinson. "He explained what was going on, and it was educational for us and brought home the dangers of using Airsoft weapons. We were aware, but it made us more so, and it created a dialogue between my wife and sons and I."

Brady said he understood why neighbors might be concerned because "I carry the guns bicycling to a friend’s house or sticking out of my backpack. I’m now more careful carrying them around; I conceal them better."

Regarding the press conference, Wilkinson said, "I’m a huge advocate of the police. So to be able to help them out to put this [information] in front of the news was really important to us. And as a teacher, I know education is key."

Dad Stan Tomajko came with his son Jordan, 14, also a rising Fairfax High freshman. "I brought my [replica] M14 rifle," said Jordan. "We play Airsoft in our backyards; the weapons fire plastic BBs that sting, but we’re always careful about how we use them."

Jordan said Friday’s event taught him that, "If an officer ever sees you with one of these weapons, you should always put it down and listen to what he says. That way, he doesn’t perceive you as a threat."

Tomajko came because, he said, "It’s important for me to be educated on what police perceive is the real thing. I wanted my son to learn that, as well."