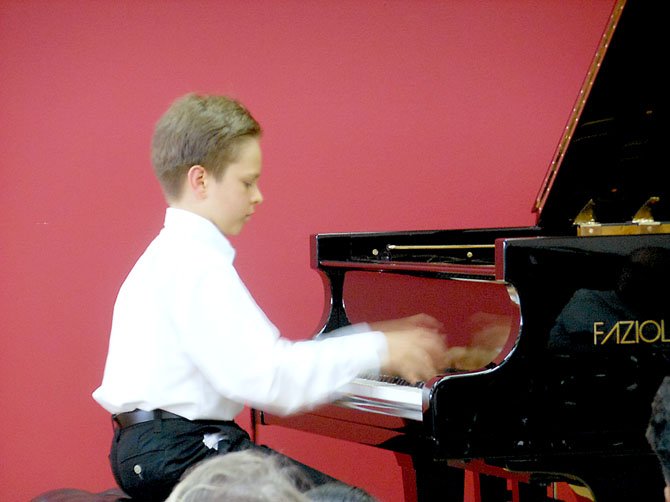 Ten-year-old Anton Nelson’s hands are a blur as he performs at a solo recital Friday, July 6 at The Piano Company in Leesburg. Photo Contributed

The walls of the piano studio where 10-year-old Anton Nelson of Oak Hill practices for four hours per day are lined with black and white portraits of the greats of the musical world: Beethoven, Brahms, Rachmaninoff, Chopin. The works of these greats have inspired Anton to expand on his already advanced musical accomplishments. On Friday, July 6 Anton demonstrated his abilities at a solo recital at the Piano Company in Leesburg.

Anton began playing piano when he was 4. His mother, Natallia, teaches piano in their home and provides Anton instruction. 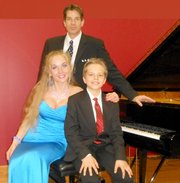 Anton Nelson with his mother, Natallia, and father, Hitch. Natallia offers piano lessons and is Nelson’s piano teacher. Nelson’s father says there has always been music in their home.

"There has always been music in the house. We taught him music because it would be a sin not to," said Anton’s father, Hitch Nelson.

It was following an incident during a visit to Seattle when Anton was 6-years-old that truly led the Nelson family to increase Anton’s exposure to great music. In a restaurant in which the family was dining there was an upright piano. "Anton played a one short, little piece and everyone started clapping. People were genuinely moved," said Hitch. "When we returned home, we started introducing him to great music."

Before Anton displayed his musical abilities, his father thought he might actually become a great ice skater or hockey player. "He was quite good at skating." To encourage his son, Hitch gave him a hockey player doll. He finds that old encouragement amusing.

Anton is home-schooled and the family does not have a TV or video games in the home. The absence of these distractions, believes Anton’s father, allows Anton to truly focus on the "beauty of life."

In his spare time, Anton enjoys performing scientific experiments and using his microscope. Anton is fluent in English and Russian, his mother’s native language. He enjoys studying mythology.

Anton’s solo recital on Friday was titled "The Performer as Hero." Anton played for a little over an hour before a crowd of about 40 people. Anton said that he was not nervous and the recital went well. As Anton prefers music from the Romantic period, his recital featured works from that period including: Chopin’s Opus 66, Liszt’s La Campanella, and Brahms’ Opus 119/3.

According to Anton’s father, Anton plays with a "combination of raw power and nuanced gentleness that reflects a maturity and artistry beyond his years."

"I’m proud Anton chose this path. I can’t think of a more exciting path to journey down. The journey of a pianist is truly life-long and Anton is just starting out," said Hitch.

Anton and his family are hoping to find a conductor and orchestra for Anton to perform with. Meanwhile over the summer Anton plans to learn the Rachmaninoff First Piano Concerto.