The Best Friends of Great Falls 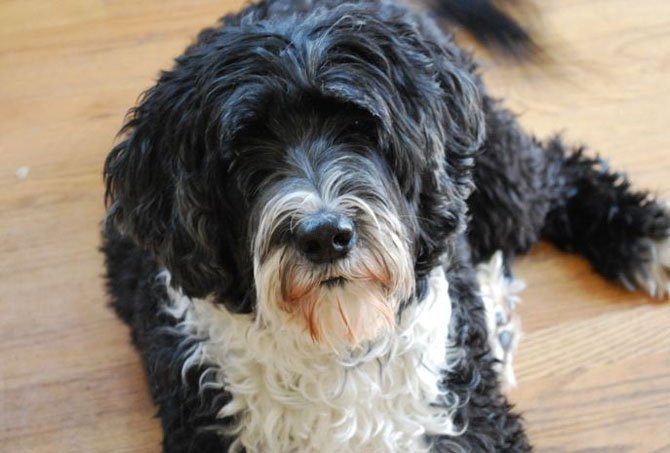 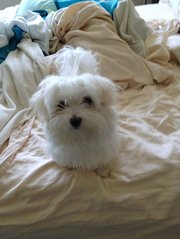 Frodo posing in a sea of pillows.

When Frodo first spent the night at Eleeka Asayesh’s house, he cried. After Frodo’s crying got more and more urgent and insistent, Asayesh let him sleep on her bed, and from that point, they were inseparable.

"He put his head on my shoulder and went right to sleep, and ever since he’s practically been my shadow, following me everywhere I go," Asayesh said.

Buying this Maltese from a special breeder, Asayesh was told it would take a while for Frodo to bond, "but it happened and from that moment I felt I had found my best friend."

When Frodo isn’t jumping on his two hind legs, he’s snuggling with Asayesh and family. According to Asayesh, he also has a peculiar way of observing someone by "tilting his head."

The 4 1/2 month-year-old may have a lot of growing up to do, but one thing he’ll keep in mind: there’s no place like family.

From left, Pepper and Portia sit side-by-side on Huang's boat.

PEPER AND PORTIA have two distinct personalities. Pepper carries the brains in the operation, while Portia displays the good looks.

As a Shiba Inu, Pepper resembles a miniature fox, while german shepherd Portia simply acts like one.

"Portia doesn’t have the typical Great Dane Expression. And instead pretends to be a small lap dog," said Nicole Hwang who owns these two animals. "She is a child’s level of playful."

Though Pepper is small in size, her perception matches that of a Great Dane.

"She’s incredibly sassy to other dogs. She’s like the queen bee, and needs to be treated like a princess," Hwang said.

Pepper’s audacious mindset lands her face-to-face with big dogs who later submit to her intimidation, according to Hwang. One arena that Pepper and Portia clash sharply in: their intellect.

"Portia seems to act her age, like a 4-year-old. Pepper, on the other hand, seems to have the mind of a 20-year-old," Hwang said. "She’s wise beyond her years."

With their unfailing friendliness and affability, Pepper and Portia are a "star dog duo," according to Hwang.

Whenever Pepper sees a new person, she goes up to them looks at them, and rolls over," Hwang said.

JOE GARGAN CAN REMEMBER the first time he welcomed a new addition to his household. He was in sixth grade at the time. Now a rising junior at college, his dog Jack still remains as a close-knit member of their family.

Before Gargan’s family found Jack, the Portuguese water dog had participated as a show dog. Only retiring a year before, Jack still carries the instinct of incredible loyalty and steadfastness, especially to his mother.

"Sometimes it's incredibly hard for anyone but my mother to take him for a walk because he refuses to be separated from her," Gargan said.

Not only did the shows sharpen Jack’s sense of loyalty, they also enhanced Jack’s manners.

"It might sound crazy, but he has this "gentlemanly" posture about him that not all other dogs have. We've also never had much trouble with potty training him, keeping him away from the cat, or harassing other dogs or people," Gargan said

Even though Gargan is away at Wesleyan University for the majority of the year, Jack never trails out of his mind.

Regardless of his age, Gargan notes Jack still "has a lot of energy left in him." As the "water" in his dog title suggests, Jack gravitates towards any pool of water for his favorite leisure activity: swimming.